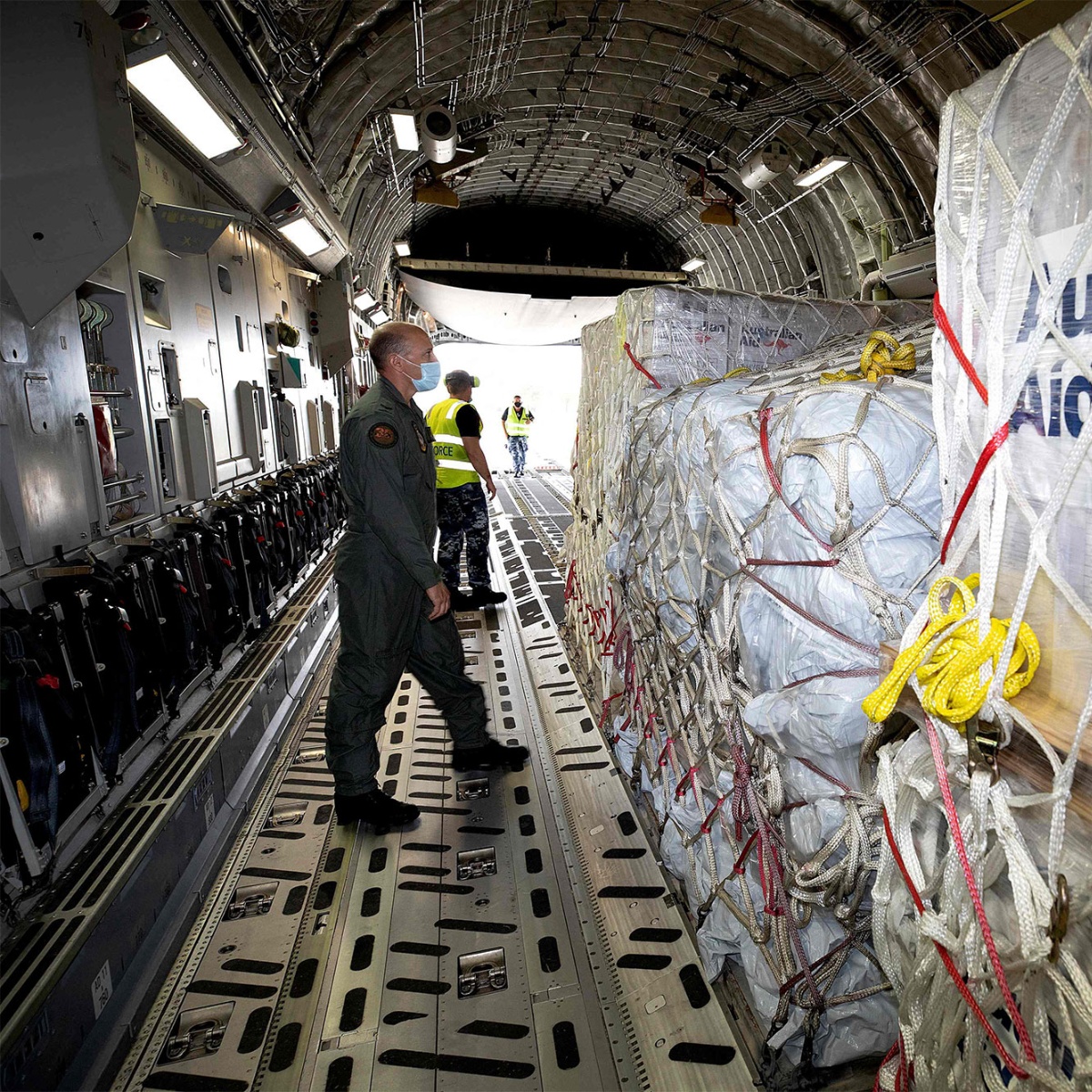 The first emergency supply plane arrived at Tonga this Thursday, five days after a devastating volcanic eruption and tsunami, as scattered communities awaited the arrival of a ship carrying equipment to increase the supply of drinking water.

A Royal Air Force C-130 Hercules New Zealand landed at the International Airport Fua’amotu from the South Pacific island nation, a defense spokesman said, after a layer of volcanic ash was cleared from the runway.

The ash has spoiled much of the archipelago’s drinking water.

An Australian Globemaster C-17A military transporter also landed, with a second Australian plane due to make the flight later in the evening.

Australian Defense Minister Peter Dutton said the Globemaster was loaded with supplies, including desalination equipment, shelters, kitchens and a sweeper to help remove ash from the airport.

“Today’s C-17A flight was made possible by the tireless efforts of the Tongan authorities who have worked to clear a thick layer of volcanic ash from the runway,” Dutton said in a statement.

The delivery of the supplies brought in by both aircraft was carried out without contact to ensure that Tonga remains free of the coronavirus.

The Hunga Tonga-Hunga Ha’apai volcano erupted with a deafening blast on Saturday, triggering tsunamis that have killed at least three people and destroyed villages, resorts and many buildings and cut off communications for the nation of some 105,000 people.

Rachael Moore, High Commissioner for Australia in Tonga, he said the loss of property had been “catastrophic” and that drinking water was “an extremely high priority”.

The second ship, carrying 250,000 liters of water and desalination equipment that will be able to produce 70,000 liters a day, was on its way. The Commission said it would check shipping channels and dock approaches at Tonga’s port in preparation for its arrival on Friday.

“Along the western beaches there is a lunar landscape where beautiful resorts and many, many houses once stood,” Moore told Australian radio.

In a radio address, the King Tupou VI of Tonga called for courage and hard work for the reconstruction process.

Telephone links between Tonga and the outside world were reconnected on Wednesday night, although full restoration of Internet services is likely to take a month or more, according to the owner of the archipelago’s only underwater communications cable.

Speaking to Reuters from the capital, Nukuʻalofa, journalist Marian Kupu said the Tongans were cleaning up all the dust from the volcanic eruption but feared running out of drinking water.

“Each household has its own water supply tanks, but most of them are full of dust, so it’s not safe,” Kupu said.

They ask to ‘wear masks’ in Tonga

An Australian ship carrying aid is due to set sail on Friday Tonga.

Overseas Tongans frantically called families back home to make sure they were safe.

“It was very reassuring to hear from them,” said Fatafehi ​​Fakafanua, president of Tonga’s legislative assembly, who was in New Zealand when the disaster struck, after contacting his family.

“The government has advised them to drink bottled water, cover up when outside and also wear masks because of the ash.”

The United Nations They said that some 84,000 people, more than 80% of the population, have been severely affected by the disaster and that drinking water is “the biggest problem in saving lives.”

The volcano erupted about 40 miles (65 km) from the Tongan capital and an explosion was heard 2,300 km away in New Zealand.

Waves of up to 15 meters (49 feet) hit the outer group of islands Ha’apai, destroying all the houses on the island of Mango, as well as the west coast of Tonga’s main island, Tongatapu, where 56 houses were destroyed or seriously damaged.

Accounts of miraculous escapes are emerging, including that of a 57-year-old man who was hailed as a “real-life Aquaman” after recounting how he had to swim for about 27 hours after being swept away by the tsunami.

In AmericanPost.News We will follow the latest news from Tonga like the eruption was 500 times more powerful than the Hiroshima bomb according to NASA.