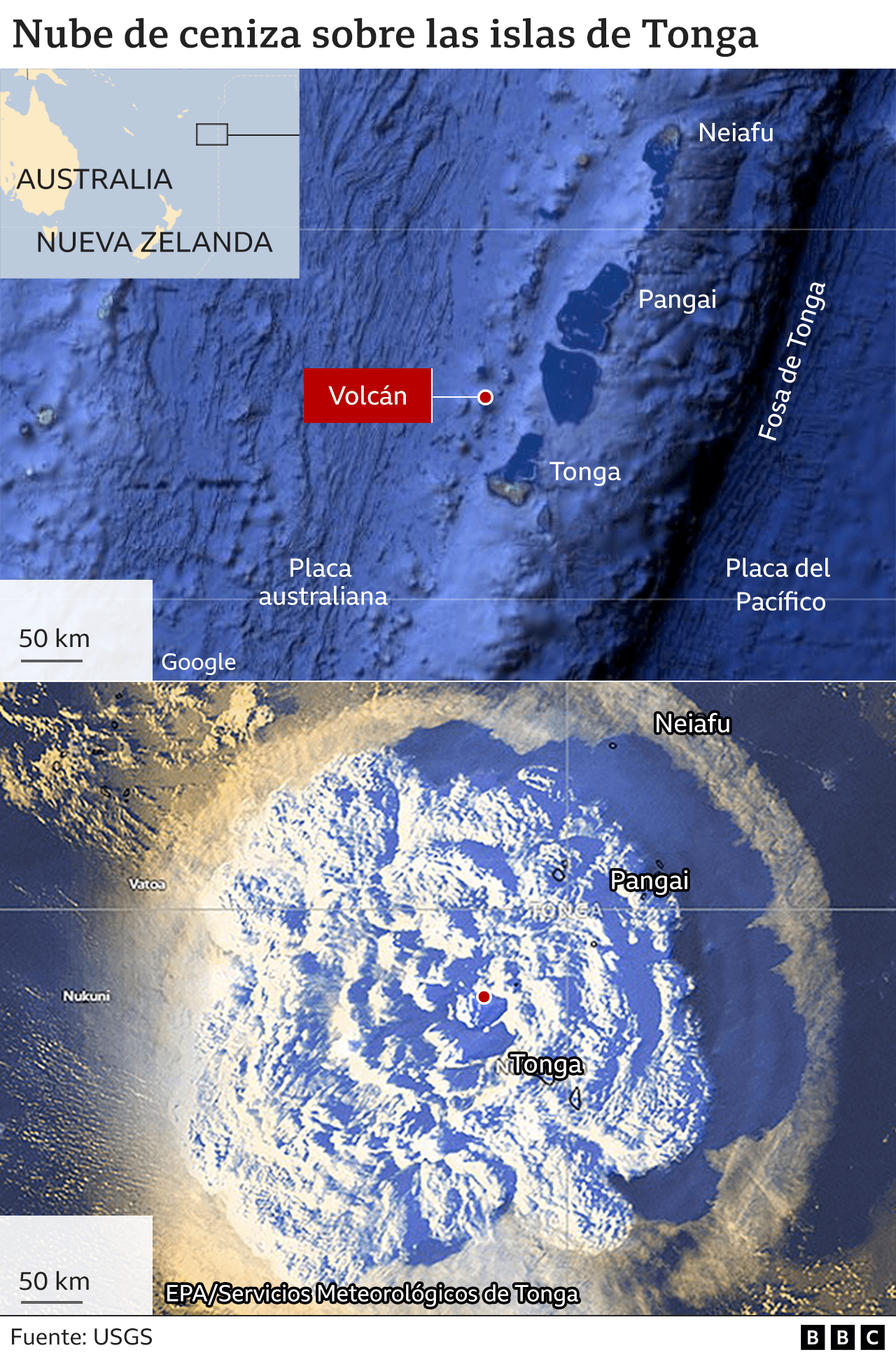 Although there are Reports of significant damage in the South Pacific island nation of Tonga following a massive volcanic eruption that triggered a tsunami on Saturday, communication problems have prevented getting a full picture of the situation.

The authorities They have not confirmed any deaths, But communications are at a standstill, making it difficult to gauge the scale of the destruction.

But a British woman, Angela Glover, died after being swept away by waves, her brother confirmed.

More than 10,000 km away from the eruption, Two people drowned on a beach in northern Peru.

Peruvian police reported that on a beach known as Naylamp, in the province of Chiclayo, in the north of the country, two women were overcome by “anomalous waves” on Saturday and drowned.

Police described the beach as “not suitable for bathing”, but it was not clear if the women were in the water when the waves hit.

In Tonga itself it is believed that up to 80,000 people may have been affected by the event, the International Federation of Red Cross and Red Crescent Societies (IFRC) told the BBC.

Internet and telephone communications on the island are extremely limited and the outlying coastal areas remain isolated.

“Significant damage has been reported along the western coast of Tongatapu, including resorts and the northern coastal area of ​​Nuku’alofa,” the New Zealand High Commission on Tonga posted on Facebook, referring to the main island of Tonga. Tonga.

“A thick layer of ash remains on Tongatapu,” he added.

In particular, there is much concern about the situation on the remote outer islands.

The New Zealand Defense Force tweeted that a plane had departed for Tonga to “assist in an initial impact assessment of the area and low-lying islands.”

Katie Greenwood of the IFRC in Fiji said help was urgently needed.

“We suspect that there could be up to 80,000 people in Tonga affected by the eruption itself or the tsunami wave. tsunami and the flood as a result of the eruption”, He said.

“That was a shock to people, so we have some concern. for those outer islands and we are very interested in hearing from people,” he added.

Local residents say Tonga looks like “a moonscape” after being covered by a layer of volcanic ash.

Dust is contaminating water streams and right now fresh water has become a necessityaccording to Ardern.

Charities said the ash and smoke had prompted authorities to ask residents to drink bottled water and wear masks to protect their lungs.

One of the worst eruptions in decades

The undersea volcano erupted on Saturday, spewing a plume of ash into the sky and prompting warnings of 4-foot waves. The eruption was so strong that could be heard in New Zealand, 2,383 km from Tonga.

As the sky was covered with ash, several videos showed the traffic jams and how many people fled in cars from the lower areas. Hours later, phone and internet lines went down in Tonga, leaving the island’s 105,000 residents virtually without communication.

Ardern said power was being restored in parts of Tonga and mobile phones were slowly starting to work. However, the situation in some coastal areas remains unknown.

Unable to speak to their friends and family, many Tongans in Australia and New Zealand were concerned for their safety.

New Zealand and Australia are sending surveillance flights to assess the extent of the damage.

Satellite images show that some smaller islands have been completely submerged under water.

Experts say that the eruption of the Hunga-Tonga-Hunga-Ha’apai volcano it is one of the most violent in the region in decades.

The eruption triggered tsunami alerts in several countries, including Chile, the United States and Japan. Some flooding was reported in coastal areas in California and Alaska.

Satellite images show the destruction of the volcano

This spacecraft is a radar platform and can see through clouds and ash that obscure the surface below.

The images clearly showed that much of the crater rim above the ocean waters had been destroyed, a sign of the ferocity of the explosion.

Researchers will study to understand the cause of a tsunami that sent waves not only to nearby islands but to various beaches around the Pacific Ocean.

To what extent was the explosion itself responsible? Pressure waves can generate what is called “meteotsunami”.

Another possibility is that perhaps the displacement of the water was the result of an unseen collapse from part of the volcano below the ocean surface.

In the next few days the facts will be clarified when more information about what happened is obtained.