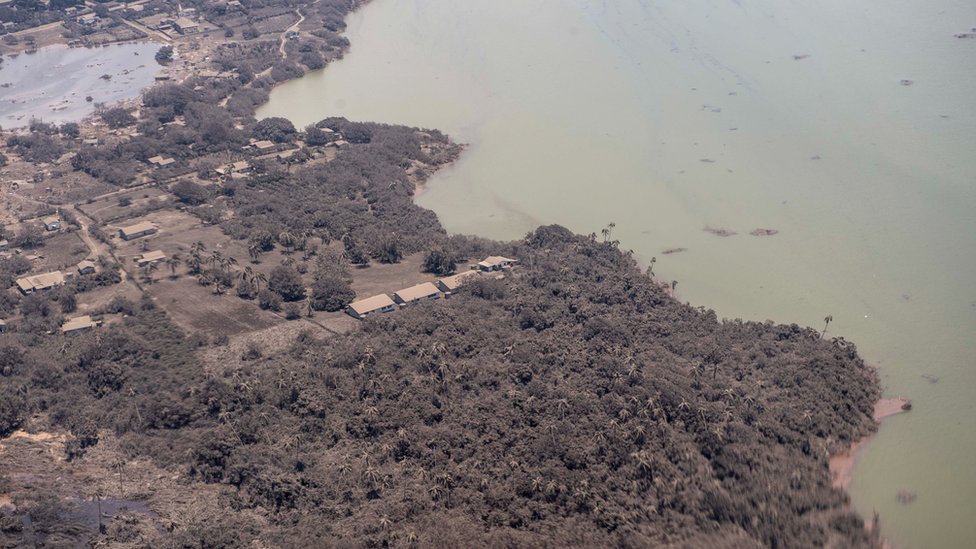 It is a remote group of islands in the South Pacific now covered in volcanic ash and cut off from the rest of the world.

The explosion of the Hunga Tonga-Hunga Ha’apai volcano triggered a tsunami across the Pacific Ocean.

The most pressing need in the archipelago is drinking water. But the full extent of the damage has yet to be assessed..

So far, only three deaths have been confirmed. But photographs taken by the New Zealand Air Force show a completely destroyed village.

The Tonga government says some of the smaller outlying islands are particularly hard hit, with all houses destroyed on one of the islands.

There is growing concern that the violent waves have caused severe destruction on smaller islands which have not yet been reached.

Why is it so hard to get help there?

The eruption caused a blanket of ash to cover much of the archipelago, including the runway at Tonga’s main airport in the capital, Nuku’alofa.

The New Zealand government, which is trying to get drinking water and other supplies to the island, says planes cannot land and the runway will need to be cleaned.

On Tuesday (January 18), about two hundred volunteers were trying to clean the ash from the runway.

“A C-130 Hercules aircraft is ready to deliver humanitarian aid and disaster relief supplies, including collapsible water containers, generators and hygiene kits for families once the airport runway is clear,” he said in a statement. statement from New Zealand Foreign Minister Nanaia Mahuta.

They will be dispatched “as soon as the airport resumes operations and flight conditions allow,” Zhao said.

Meanwhile, Australia said it will send planes to assess the extent of damage to critical infrastructure, such as roads, ports and power lines, to help plan the next phase of the emergency response.

According to Mahuta, New Zealand had conducted surveillance and reconnaissance flights over the area.

The images and details were sent to the Tongan authorities to help make planning decisions.

Another factor that is complicating the efforts is the damage to the communications infrastructure.

The only underwater cable connecting the archipelago with the outside world was severed.

The repair depends on sending specialized ships to the area, which could take two weeks.

Satellite communication is spotty. On Tuesday (18), in the first statements since the eruption, the Tongan government described the destruction of homes on two islands.

Overseas Tongans have yet to hear from their relatives. Joanne Mataele, who lives in Australia, told the BBC that I had no choice but to “wait and wait”.

“I know of some people who have been in contact with their relatives in Tonga through satellite phones. I think only a couple of people have access to these phones. So we are sitting and waiting, which is all we can do right now.”

Given the difficulty in communications, Mahuta said New Zealand had decided to send two boats with diving equipment, a helicopter, water, desalination equipment and relief supplies to help in the emergency.

Trip will last three days the boats will remain on standby in case the Tongan government requests assistance.

The challenge for the covid

Although the extent of the damage seems increasingly worrying, there is a reason Tonga may be reluctant to ask for outside help: It has only recorded one case of Covid so far, and the nation wants to remain free of the pandemic.

BBC Philippines correspondent Howard Johnson notes that every effort is being made to provide support in a way that reduces the islanders’ potential exposure to covid.

New Zealand says it is delivering its aid “contactlessly” and in accordance with the island’s “strict border controls”.

Jens Laerke, spokesman for the UN Office for the Coordination of Humanitarian Affairs in Geneva, says that “one of the first rules of humanitarian action is ‘do no harm’.”

“So we want to be absolutely sure that all the necessary protocols to enter the country will be followed.”

At this time, fresh water is a top priority in efforts to help the islands. But it is far from being the only one.

The UN says most of the country has been affected by a 1-2cm layer of volcanic ash, which is affecting food and water supplies.

Residents have been told to wear masks outside due to poor air quality.

“What we really care about is access to clean water,” said Katie Greenwood, who heads the Pacific delegation of the International Federation of Red Cross and Red Crescent Societies.

But he added that “we still have some fears for some people on the islands that we haven’t been able to hear anything about yet.”