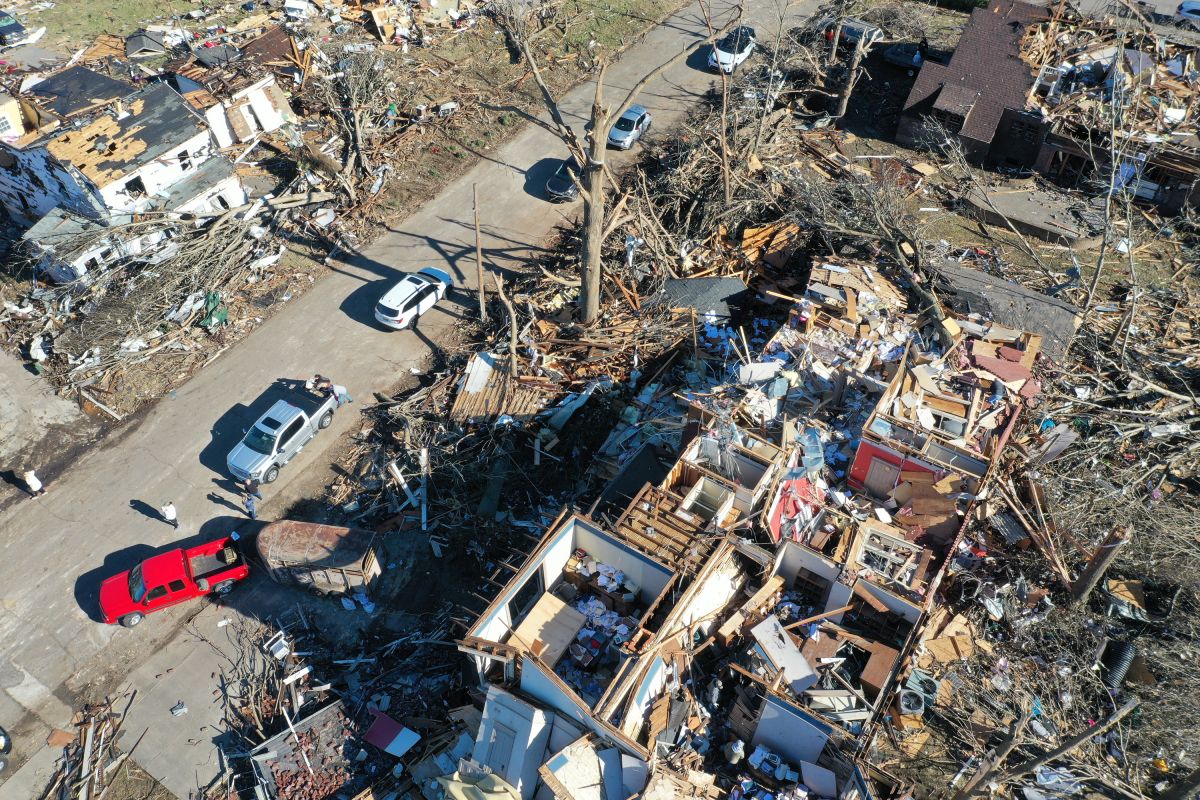 The mighty tornadoes that ripped through cities in Kentucky and other states of the United States on Friday have been described as one of the most devastating in history.

Authorities say the death toll is likely to exceed 100 and finding survivors is increasingly unlikely.

The tornado swarm swept through what it encountered on a 360-km journey through Arkansas, Illinois, Missouri and Tennessee, but the biggest losses occurred in Kentucky.

“The devastation is unlike anything I have ever seen in my life and I have trouble putting it into words,” said state Governor Andy Beshear at a news conference.

“It’s very probable that there are more than 100 people dead here in Kentucky “, added.

In the other four states, 14 deaths have been reported.

In an interview on Sunday on the show State of the Union On CNN, the director of the US Federal Emergency Management Agency (FEMA), Deanne Criswell, said that these types of severe weather events that “are normalizing.”

“Is will be our new normal, and the effects that we are seeing from climate change are the crisis of our generation ”, he indicated.

The official noted that severe tornadoes are rare at this time of year, especially of such a severe magnitude.

“We see tornadoes in December, that part is not unusual, but at this magnitude, I don’t think we’ve seen one this late in the year,” Criswell said. “The gravity and the amount of time that this tornado, or these tornadoes, spent on the ground is unprecedented.”

How are tornadoes formed

Tornadoes are vertical funnels of rapidly rotating air. Its winds can exceed 400 km per hour and can clear a path 1.6 km wide and 80 km long.

Tornadoes are born in thunderstorms and are often accompanied by hail. Giant and persistent thunderstorms called supercells generate the most destructive tornadoes.

These violent storms occur around the world, but the United States is a major focus of these events, with about 1,000 tornadoes each year.

The powerful tornadoes, which meteorologists say are unusual in the coldest months of the year, occurred just months after Category 4 Hurricane Ida tore through the eastern United States.

But what is the difference between a hurricane and a tornado?

Hurricanes and tornadoes are alike in basic ways. Both are meteorological phenomena that produce potentially very destructive strong winds.

And both are winds spinning around a center.

It might appear that a tornado is a small version of a hurricane: it has a smaller diameter and lasts less time.

And is that the average area covered by a tornado is 300 meters, while the largest can cover a diameter of two to three kilometers.

Hurricanes, meanwhile, are much more extensive, and can affect areas ranging from 100 to more than 2,000 kilometers in diameter.

But in reality they are quite different phenomena.

Another difference is that hurricanes form in the ocean, in tropical latitudes, and have a life span of days or even weeks.

While tornadoes almost always form on land (or also in areas of the sea very close to the coast) and they only last a few minutes.

The fact that a tornado comes from a hurricane or a simple storm does not mean that it is more or less lethal: all these structures have their particular characteristics and damage depending on many other variables.

In other words, tornadoes generated by a hurricane are not very different from other tornadoes.

The danger of a tornado

When a hurricane makes landfall, the ideal conditions are for tornado formation: the cyclone slows down, its low winds weaken but the higher winds remain aggressive.

This instability, added to the conjunction of different temperatures in the air, generates the tornadoes that are detached from the hurricane and can hit small areas before dying out.

The tornado is almost always generated in the northern part of the hurricane and at a distance of between 80 to 500 kilometers from the center.

Perhaps the biggest problem with tornadoes associated with a major hurricane is hitting areas already affected by the cyclone.

And above all that, unlike a hurricane, tornadoes appear almost suddenly: ehe surprise factor is one of its gravest threats.

* Girlfriend of an Amazon worker killed by the tornado in Illinois said the company had prohibited her from going home
* Kentucky authorities are looking for an inmate who escaped after the deadly tornado
* “Please send help,” Kentucky tornado victim cries out on Facebook video while trapped in factory that collapsed