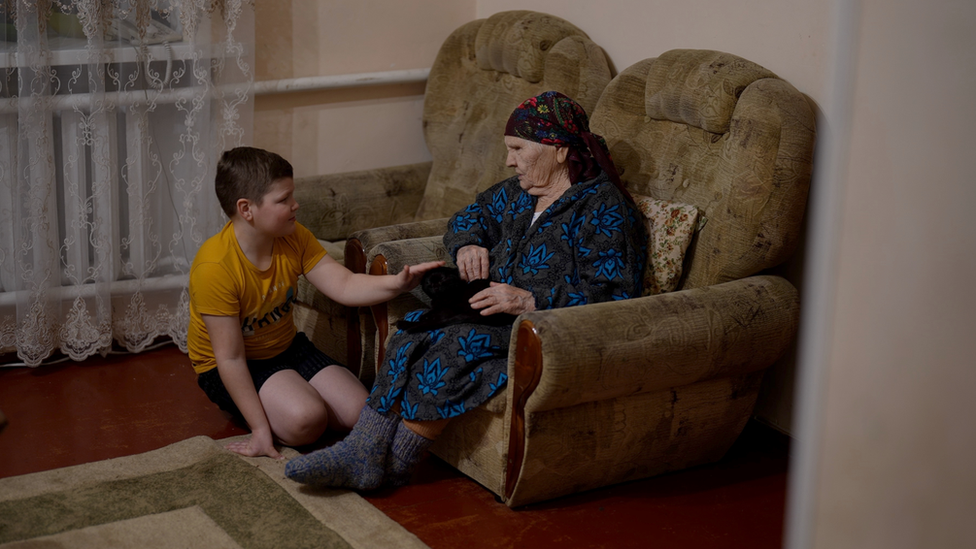 Resentment towards Moscow in Ukraine has deep historical roots. In the Great Famine of the 1930s, as many as four million Ukrainians starved to death during Soviet dictator Joseph Stalin’s forced collectivization of farms. The BBC’s Fergal Keane was in the eastern city of Kharkiv, near the Russian border, meeting some of the last survivors of the famine.

They hurried to bolt the door and close the windows of the small wooden house, which vibrated from the banging of the men outside. Petro Mohalat, now 95, remembers early food raids in the winter of 1932.

He was five years old when the communist “brigade” arrived in the village. Her grandmother told the children to hide where they could.

“It was very scary. The brigade had pitchforks and they came to all the houses to get bread”, he recalls. “They used crowbars to get in. Then they went to all the barns trying to find buried bread.”

Under Stalin’s orders, communist officials seized food and prevented peasants from leaving their villages to search for supplies. They were being punished for resisting the forced collectivization of the farms.

Ukraine calls it “Holodomor” (death by starvation), the death of approximately four million people in the famine of 1932-33.

Now, amid fears of a Russian invasion, memories of what Ukrainians suffered at the hands of the Kremlin are fueling resentment toward Moscow.

“My father had to give everything to the collective farm: our cow, horse, even our bucket. My mother was very angry,” says Mohalat.

He lives in a farmhouse near the village of Kovyyhi, some 60 km from the Russian border, along a narrow road littered with snowbanks where the fields darken as light falls.

For the remaining famine survivors, this is a landscape of ghosts.

Oleksandra Zaharova, 98, remembers the constant hunger, the desperate search for food and the faces of the dead.

“What did I see?” he asks. “I saw people who died. They dug a big hole and dumped all the bodies into it.“.

His father managed to escape and traveled to western Ukraine, taking the family’s remaining valuables to try to exchange for food.

“But he didn’t get anything,” he says. “We lost everything.”

Oleksandra’s great-grandson Dmytro, who grew up listening to her stories about the Holodomor, has served in the Ukrainian army in the east of the country.

He is now with his unit, preparing to defend it in the event of an invasion.

Although other parts of the former Soviet Union also suffered from Stalin’s ruinous agricultural policies and savage repression, the greatest loss of life occurred in Ukraine.

little more than a decade before they had fought to establish an independent nationbut were defeated by the Red Army.

It says a lot about official attitudes that the Russian Supreme Court recently ordered the closure of Memorial, Russia’s oldest NGO dedicated to exposing Soviet-era oppression.

The group was accused of portraying the USSR as a “terrorist” state instead of being “proud of our glorious past“.

In the dark and cold basement of the Kiev Institute of National Memory, the past floats in the shadows.

This is where prisoners disappeared, including many arrested during the persecution that accompanied the famine.

I went there to visit the director of the institute, Dr. Anton Drobovych, who told me that the building had once housed the secret police. his own grandfather he was assassinated by the Stalin regime.

Illuminated only by the light of our mobile phones, we walked through narrow passageways, passing the network of secret cells through which thousands of people passed on their way to torture and death.

Drobovych stresses that the responsibility for the horrors of that period it does not fall only on Stalin.

The repression and forced collectivization could not have happened without the participation of a large number of Ukrainian communist officials.

Now he sees in Russia’s modern attempts to impose its will on Ukraine worrying echoes of the Soviet past.

“They protect Stalin, they hide the truth, they attack us. They do not recognize us as an independent country, why? We don’t understand why,” she expresses.

As all nations know, memory is a powerful weapon. The story of the Holodomor is central to Ukraine’s idea of ​​itself as a country that defies Russian domination.

Recalling the horror of the famine, Oleksandra Zaharova feel the responsibility to convey what you remember.

But when I ask if he was able to have a good life after surviving the Holodomor, he tells me how two of his children died in a subsequent famine.

Yes, she survived, but it was not a life that others wanted to have lived.