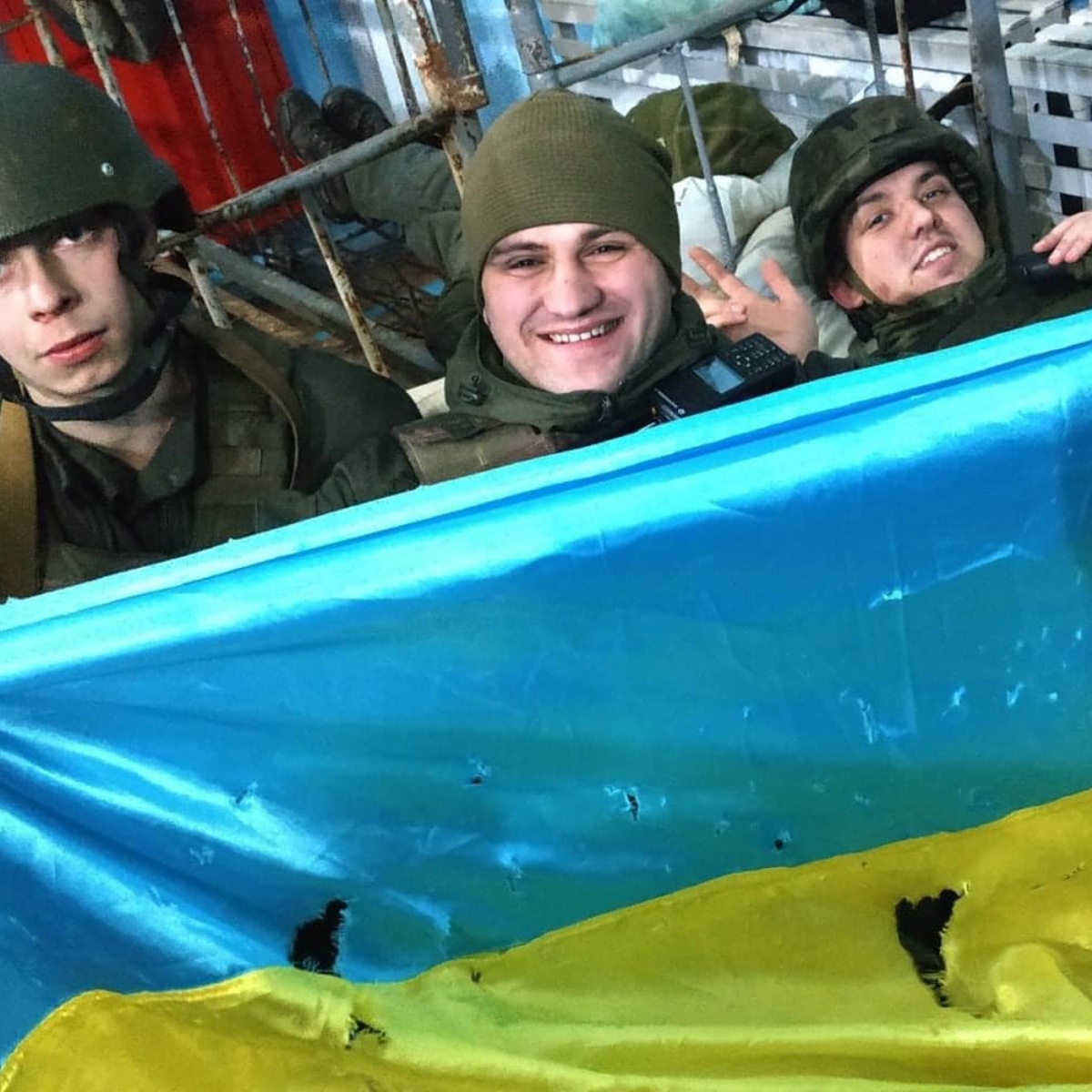 The troops of Ukraine they recovered the kiev airport from the Russians, just hours after losing it, in a major blow to Vladimir Putin.

The Ukrainian National Guard shared a photo of three soldiers holding a bullet-riddled Ukrainian flag, calling them the heroes of the battle.

It came just hours after Ukraine’s President Volodymyr Zelenskyy ordered compulsory conscription and banned all men aged 18 to 60 from leaving the country.

Antonov Airport, near the city of Hostomel, 20 miles from Kiev, is considered crucial to Russia’s invasion strategy, just outside the capital.

But despite elite Russian airborne forces seizing the airport, on Friday the Ukrainian government declared that it had retaken it.

Deputy Minister Anton Herashchenko made the announcement, according to The Kyiv Independent.

“Guards with their flag, shattered after today’s battle,” he wrote. “Congratulations to all of you and say that we are going to win!”

Vladimir Putin’s tanks are less than 20 miles from Ukraine’s capital as thousands desperately try to escape west and outrun the advancing army.

Ukrainian government sources have claimed that 18 Russian Ilyushin Il-76 planes have left the western Russian city of Pskov for Kiev.

The country’s president, Volodymyr Zelenskyy, said that Russia had captured an airfield near Kiev.

Late on Thursday, 13 Ukrainian border guards were killed when Russian troops seized Snake Island in the Black Sea, near the border with Romania and the European Union.

President Zelenskyy has declared a general mobilization: gathering and preparing military troops and supplies for war.

Western officials also reported that the forces crossed from Belarus, where a series of large-scale military exercises have been held in recent days, as well as from the annexed territory of Crimea.

The West is concerned that Russia intends to storm Ukraine in a flash war, installing a pro-Moscow puppet regime in Kiev.

President Zelenskyy said 137 people were killed on the first day of the conflict and said his country was left “alone” to fight Russia.

He also announced the introduction of compulsory military enlistment rules, prohibiting all men between the ages of 18 and 60 from leaving the country.

The President Zelenskyy He said: “What we have heard today is not just missile explosions, fighting and the roar of planes.

“This is the sound of a new iron curtain, which has collapsed and is closing Russia off from the civilized world.

“Our national task is to make sure that this curtain does not fall on our land.”

President Zelenskyy says 137 people were killed on the first day of the conflict, adding that his country has been left “alone” to fight Russia.

An adviser to the Ukrainian president, Mykhailo Poldoliak, told reporters: “After a fierce battle, we lost our control over the Chernobyl site.

Just after 1am Ukrainian time on Friday, NEXTA, an Eastern European media agency, claimed that anomalous jumps in radiation levels had been recorded near the Chernobyl site.

Criticizing the “senseless” attack by Russian forces, he added: “It is impossible to say that Chernobyl is safe.”

The president’s office warned that the move is “one of the most serious threats to Europe today” as Russian troops may be preparing to provoke the nuclear power plant or “use the damage received during the attack to blame Ukraine, or damage them greatly.” the most dangerous objects.

Ukraine’s Foreign Ministry said the Russian attack “may cause another ecological disaster.”

Chernobyl “may happen again in 2022” if the war continues, he said.

Following the news, US President Joe Biden made a television speech in which he accused Putin of starting a war in Europe.

“Putin is the aggressor. Putin chose this war,” he said. “And now he and his country will bear the consequences.”

It comes as Vladimir Putin’s troops simultaneously entered Ukraine from the north, east and south after a cruise missile barrage.

Chernobyl lies 80 miles north of Kiev on a strategic route to the capital from Belarus, Putin’s puppet state where he has stationed 30,000 troops.

Soldiers were said to be fighting near the giant sarcophagus that sealed the reactor that exploded in the world’s worst nuclear disaster in 1986.

Zelenskyy added that the Russian assault on Chernobyl was “a declaration of war on all of Europe.”

The site is also home to nuclear waste, and officials openly expressed fear that Russian artillery shells could cause a catastrophic leak.

Anton Gerashchenko, adviser to the Interior Minister, said that the invading troops entered the exclusion zone from the Belarusian side.

He added: “If the occupiers’ artillery strikes destroy the nuclear waste storage facility, radioactive dust could cover the territories of Ukraine, Belarus and the EU.”

The April 1986 reactor explosion and fire killed at least 31 people and spewed a huge cloud of radioactive particles into the air.

It blew across Europe and rained over thousands of square miles.

The Chernobyl site is still protected by a large exclusion zone where people can only visit for short periods to avoid high doses of radiation.

The feared Russian invasion came in the early hours of today as missile blasts rocked Kiev and 24 other cities.

A second wave followed hours later when dramatic video showed a swarm of Mi-8 and Ka-52 helicopters shelling an airport near the capital.

It was followed by a ground battle for control of the airfield.

And tonight it was claimed that 18 Russian Il-76 transport planes had taken off from Russia for Kiev.

It was feared that paratroopers might be brought in for a lightning assault to seize the capital.

US officials said Putin’s goal was to “decapitate” the democratic government and install a Kremlin stooge as president.

The tanks also came east from Russia and met fierce resistance from defense forces in Sumy, near the strategic city of Kharkiv.

Russia was reported to have gained control of much of the Kherson region in the south.

The Ukrainian armed forces have put up resistance

Armies on both sides have suffered “heavy casualties”, an intelligence update from the UK Ministry of Defense said tonight.

It read: “Russian forces based in Belarus are advancing towards Kiev.

“The Ukrainian armed forces have put up a strong resistance and continue to control key cities.

“Heavy casualties have been suffered on both sides, although the exact numbers are currently unclear.”

Across the country, dozens of civilians were killed, including 22 in a village near Odessa, a child in a block of flats in Kiev and four when a hospital was bombed in Donetsk province.

As we report in AmericanPost.NewsElsewhere, fighter jets were seen flying low over Kiev, and a Ukrainian An-26 plane was shot down killing five.