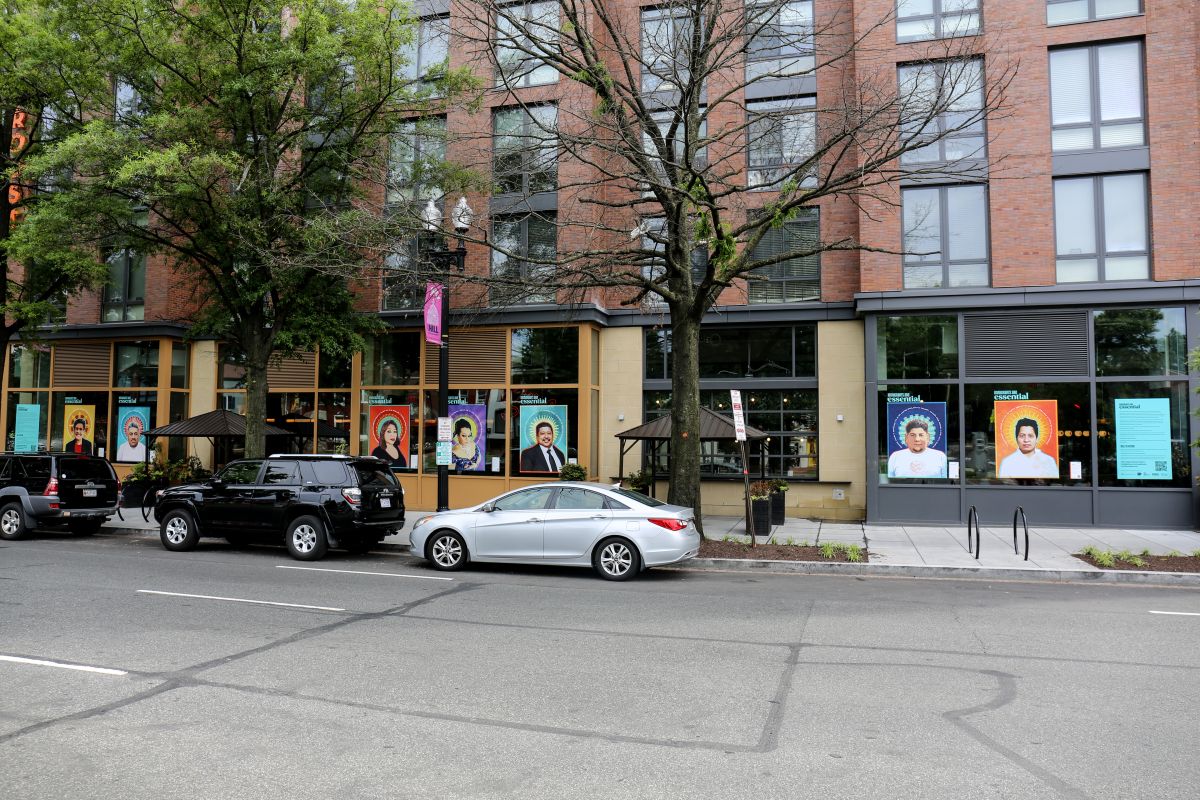 This Tuesday, January 31, the #ImmigrantsAreEssential art exhibition arrives in Los Angeles that pays tribute to undocumented essential workers who have died from covid-19.

“This project is a public installation that honors people who were essential workers and died undocumented,” says Paola Mendoza, the artist in charge of creating and mounting the exhibition they named #ImmigrantsareEssential.

The exhibition comprises 7 portraits that the artist created based on the photographs of essential workers, mainly Latinos from New York and New Jersey, and a Filipino immigrant from Los Angeles.

The artist added elements that describe part of the tastes and personalities of the deceased workers.

“To each frame I added particular things that they loved.”

The installation also includes some minutes of the interviews she did with her relatives to find out what they were like in life and what they liked.

“The families collaborated very intensely. The interviews lasted 2 or 3 hours, in which they let out a very deep pain. I wanted to bring out the essence of people for the exhibition.”

He worked for almost 4 months preparing the art installation, and it premiered in a New York shopping mall, attended by the families of essential workers whose lives were taken by covid.

“We opened it to the public in April 2021. It was very moving for families who have gone through the suffering alone without sharing their sadness with the community due to the pandemic,” says the artist, who was presented with the idea in November 2020, and worked on making the project a reality for four months.

“It was very difficult to talk to people who are suffering alone and isolated, and tell their stories and acknowledge their dignity.”

Paola says that for this project she wanted a diversity of experiences.

“By seeing the portrait during the exhibition, they will see the bibliography of the person in conjunction with the audio of the families so that they have the total experience and it touches their hearts.”

Among the stories that impacted him the most, stands out that of Moisés, who died at the age of 37 in the first months of the pandemic, and left behind a 10-year-old girl.

“He got sick, no one knew what was going on. It hurts me because I have an 8-year-old son. It broke my heart.”

The artist says that these stories of essential workers show that we need to pass laws that protect them.

“We need to give it dignity.”

This art installation was a project of the non-profit organizations Resilience Force and the National Immigration Law Center (NILC).

“Immigrants are essential because of their humanity and their vital role in our nation. They always have been and always will be. The Immigrants Are Essential campaign and exhibit serve as pro-immigrant content in a sea of ​​anti-immigrant news that sadly affects people every day,” said Victoria Ballesteros, head of communications for the National Immigration Law Center.

He added: “This series celebrates the life and value of immigrants in our communities as workers, but more importantly, as neighbors.”

He has been in New York, and during the month of January at the Arizona Latino Arts and Culture Center in Phoenix, Arizona.

Those who attend the exhibition will learn a little about the lives of Fedelina, Mario, Moisés, Yimel, Juan, Ofelia and Guadalupe, undocumented immigrants who, like thousands, were taken too soon by this pandemic.

They got sick while working in the grocery stores so we could keep eating in quarantine; or when they cleaned houses, offices and hospitals.

In addition to workers, they were fathers, mothers, sisters, aunts, uncles, lovers, children. They were full of music and laughter, courage and dreams. They gave up many things leaving their home countries to fight for a better life for their families and came to a place that did not always welcome them.

The pandemic found Mario with two jobs, in a laundry and in a supermarket, both considered essential jobs. For him, quitting was not an option. With masks and gloves, he arrived at his jobs every day.

On March 21, 2020, he came home with body pain, feeling unwell. He asked his three daughters to take care of their mother and not worry about him.

Mario’s passion was soccer. He liked to play the guitar and sing, but most of all he loved his family. She married the love of her life, whom she met in high school. He brought his wife and three daughters to the United States to offer them better opportunities.

He was a painter, a soccer coach, a laundry manager, a taxi driver. He was always learning new skills with a smile on his face.

She was born in the Philippines, but came to the United States with a family for whom she worked as a domestic. When he emigrated to this country, his work days had no schedule and he never received a salary. He could not eat together with the family and had to sleep on the floor.

What’s more, her employers took away her passport and she was their slave for 65 years.

In 2018, the FBI learned of Fedelina’s case, and when the Center for Filipino Workers wanted to rescue her, she did not want to leave, she was afraid.

But at the age of 83, he left the house and obtained his freedom.

The pandemic surprised her in a nursing home when she was finally starting to live, she could sleep in a bed and breathe fresh air.

She immigrated to the United States in 2001. In New York City, she transitioned to living as the woman she always wanted, but she also created friendships and a home that welcomed everyone.

He loved the mountains of his native Guerrero, Mexico, nature and butterflies.

Juan was only 44 years old and had two restaurant jobs when he fell ill with covid. Although he was not very expressive, his family describes him as kind, generous and playful. He loved to dance cumbia and cook. He was proud to be a son, brother, husband, grandfather, but above all a father.

He worked very hard and slept little to send money to his parents and other relatives. He deeply longed to come out of the shadows and return to his country to see his old father again.

On a Friday in March 2020, his sister noticed him sick. On Saturday he was taken to the hospital and on Monday, he passed away. They hit him three times that ended up stopping his compassionate heart.

Because his father died when he was very young, he had to start working at an early age to take care of his little brothers. At the age of 15, he met his future wife, and they came to the United States together.

Guadalupe worked all his life in the fields in California, but when the years began to fall on him, he developed arthritis, but his daughter says that at the same time he became more loving.

He was very proud of the Mexican culture, music and cuisine. He loved listening to The Daredevilssya the bukis.

In March 2020, Guadalupe and his entire family were infected with covid, but it was he who was attacked the hardest, for which he had to be hospitalized. A month later he died in hospital.

Ofelia was 50 years old, had 5 children and 3 grandchildren when the pandemic took her away. She came to this country with her children and worked very hard as a domestic worker. He even had his own store on a corner of his neighborhood. Her greatest desire is to help her children fulfill their dreams.

His children don’t know how he got covid. He stayed for more than a month in the hospital before he died. The virus destroyed his organs.

Before he died, with eyes full of tears, he smiled at his children.

Moisés met his wife Yamili in this country when she asked him to exchange a dollar for coins to buy a soda drink from a machine. Moisés’ smile conquered Yamili.

They fell in love, got married and had their daughter Itzel. They loved to dance, and they did it all the time.

Despite being undocumented, Moises found a way to become an air conditioning mechanic.

Both Moisés and Yamili got sick with covid, they put their daughter in a separate room. As his health condition worsened, he was hospitalized and two days later, he died.

To learn more about this exhibit, visit: #ImmigrantsAreEssential: A COVID Memorial