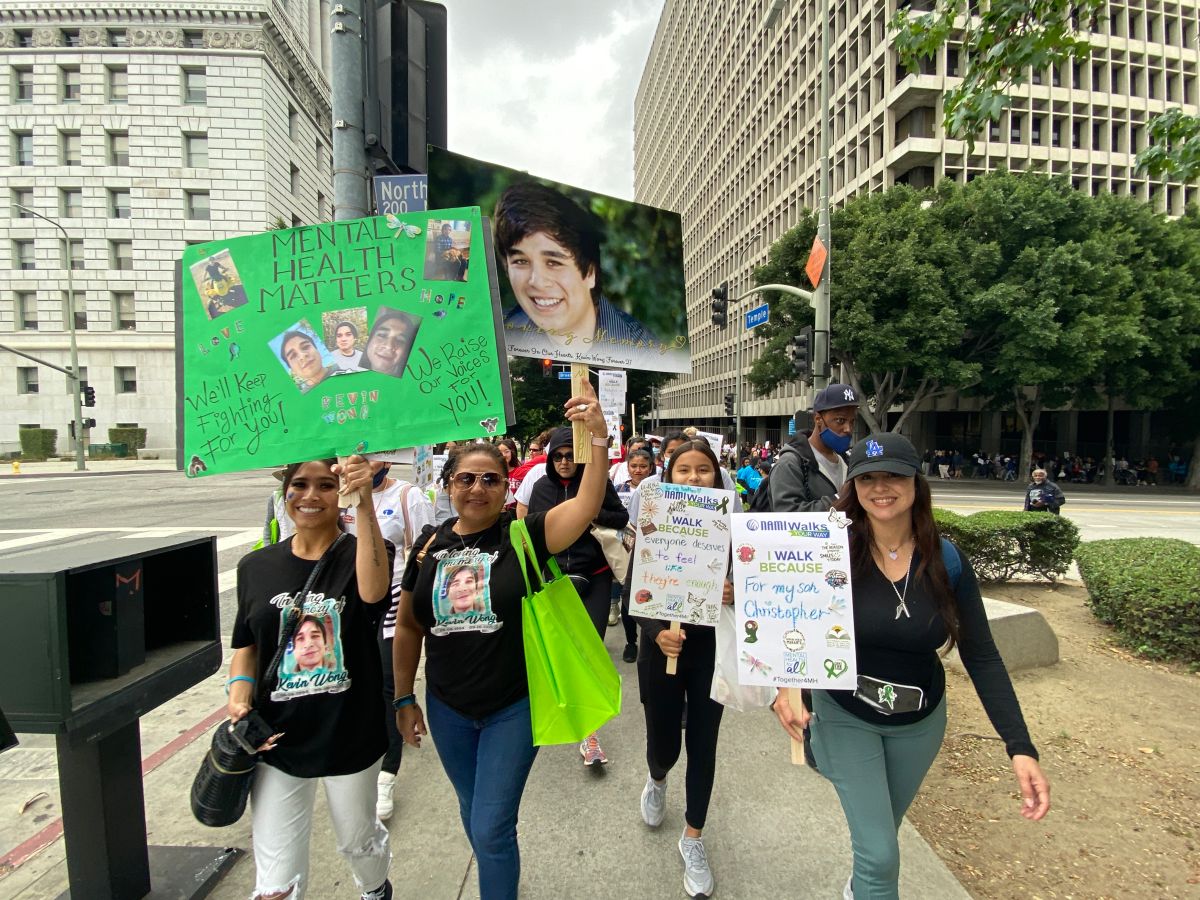 Hundreds of people gathered and marched 2.7 miles around the heart of the city of Los Angeles to further their mission of working around mental health, which, during the coronavirus pandemic, affected one in three people in the United States.
With banners and messages such as “Self-care is well-being”, “Mental health is a right”. “Jail is not a hospital” or “Mental health issues matter”, the participants of the “Mental Health March for All” 2022, paraded from Grand Park through most of the downtown streets of the Los Angeles city.
“We are here, sharing our stories and making our voices heard. Together, we know that mental health for all is more than a possibility, and it will soon be a reality.” said Trauté Winters, executive director of NAMI Greater Los Angeles.
NAMI members’ in-person walk raised over $280,000 in Los Angeles County alone.
Nationally, in 2021 they raised more than $13 million and 40,000 people participated in the walks.
Winters disclosed that starting in July, the 988 number will be the three-digit number for responding to calls for mental health, substance abuse and probable suicide crises.
Every year, millions of mental health or suicide crisis calls are made to 911 and local crisis lines. But unfortunately, when in-person help is needed, the police, not a mental health professional, are often the only available response.
“It doesn’t have to be that way,” Winters said. “People in suicidal or mental health crisis deserve an effective compassionate response.”
For this reason, the National Alliance on Mental Illness believes that to “reimagine crises” the response needs 24/7 local crisis call centers, mobile crisis teams and crisis stabilization options.
Currently, NAMI advocates for the so-called California Care Court Initiative which aims to provide services to all Californians who suffer from serious mental illness, substance use disorder and who too often languish in lack of care. homeless, living on the streets as homeless or incarcerated.

Latino with schizophrenia and in jail

The prison of the Twin Towers in Los Angeles is precisely where “Tomy” is located, the son of Olga Guillén, a Mexican mother from Nayarit.
“My son has suffered from schizophrenia since he was 16 years old and although he will be released from prison very soon, I prefer that he not be released and that they send him to a hospital to receive help with his mental health,” the afflicted woman told La Opinion. “If they let him out and throw him out on the street, he will surely kill himself.”
And even though Olga doesn’t know how to navigate the mental health support system, NAMI Executive Director Trauté Winters promised to intervene in the case.

Young Latino suffered from depression and harassment led him to suicide

Latinos have the same incidence of mental health conditions when compared to the rest of the population. However, the concerns, experiences and way of understanding and dealing with them may be different.
“Latinos do not believe in mental illnesses,” Sergio Ávila, manager of the Department of Mental Health at the LA Downtown Medical Center Hospital (LAMDC), told La Opinion. “And there are stigmas like shame to ask for help.”
In the city of Rosemead, the LAMDC unit serves an average of 110 people a day, and of those, 17% are Latino, Avila said. Most of them suffer from schizophrenia, depression and bipolar disorder.
“Like any other illness, mental illness also needs to be addressed,” he said.
Adequate attention was given to Kevin Wong, 27, the son of Cynthia Villanueva who had suffered in silence from bullying for a long time, and suffered from depression until he ended up committing suicide.
“Because he was a quiet boy, they made fun of him,” recalls Kevin’s mother. “One day, they invited him to a concert, my son drank too much and those who accompanied him cut his hair, his eyebrows, his mustache and when he woke up he couldn’t take any more teasing and took his own life.”
Trauté Wilkins noted that sharing the stories of people with mental health conditions helps politicians understand that they need to act to reimagine responses to crises.

Barriers to mental health care for Latinos
Hispanic/Latino communities show similar vulnerability to mental illness as the general population, but face disparities in both access and quality of treatment. More than half of Hispanic young adults ages 18-25 with serious mental illness may not receive treatment. This inequality puts these communities at higher risk for more severe and persistent forms of mental health problems, because without treatment, mental health problems often get worse.
Approximately 34% of Hispanic/Latino adults with mental illness receive treatment each year compared to the US average of 45%. This is due to many unique barriers to care, according to the Substance Abuse and Mental Health Services Administration, in the US Department of Health and Human Services (HHS).

language barriers
Language barriers can make it difficult or even impossible to communicate with mental health providers, especially when a person is seeking advice for sensitive or uniquely personal issues. These topics can be hard to put into words for anyone, but it’s especially hard for those who don’t speak the same language as a potential supplier.
Poverty and less health insurance coverage
According to census data, in the United States. lives in poverty, compared to 7.3% of non-Hispanic whites. People living in poverty are at increased risk of mental illness, and people with mental illness are at increased risk of living in poverty.
According to the Kaiser Family Foundation, in 2018, 19% of Hispanics did not have any type of health insurance. In addition to facing an already limited pool of providers due to language barriers, people who identify as Hispanic/Latino have even fewer options when they are uninsured.

Lack of cultural competence
Cultural differences can lead mental health providers to misunderstand and misdiagnose members of the Hispanic/Latino community. For example, an individual may describe the symptoms of depression as “nervous,” tired, or as a physical ailment. These symptoms are consistent with depression, but clinicians who are not trained in how culture influences a person’s interpretation of symptoms may assume that this is a different problem.
Legal status
For immigrants who arrive without documentation, fear of deportation can prevent them from seeking help. Although millions of children of undocumented immigrants are eligible for health insurance under the Affordable Care Act, many families may not know about eligibility or are afraid to sign up for fear of separation.

Mother and daughter battle mental illness
Sylvia Gil indicates that the case of her daughter Eliana was a “slightly strange” situation, because she had some physical problems that no doctor could diagnose the cause.
Eliana suffered from a dry cough and the spasms hit her every 15 seconds.
“He doesn’t stop coughing until he falls asleep,” says the mother. “It wasn’t until a doctor said, maybe it was something psychological.”
The symptoms were not evident because Eliana kept her feelings and her mother did not realize it.
“Some days I felt good and others I didn’t; I had a lot of anxiety and depression”, recalls Eliana. “With all that I couldn’t go out with my friends.”
She unwittingly was afraid of the unknown. She was an 18 year old who had never been to a party and she didn’t know what it was. Her social life was almost nil and everyone respected her decision not to want to leave it.
“It was difficult to get ahead because I had to stop school; I felt that no one understood me and I closed myself off, ”he tells La Opinion. “Anxiety and depression were getting stronger, and although they changed my medicines, it took time for them to help me regulate my body.”
At 33 years old, Eliana has the goal of graduating as a specialist in child development at Pasadena City College, and working with children in a hospital, since she has become a very patient woman. She hopes to graduate in 2024.
Anxiety attacks are not so frequent anymore; the depression is better and he receives help from her medicine and psychological therapy, in addition to the full support of her mother Sylvia.
“10 years ago, I started volunteering at NAMI,” says Sylvia Gil, education coordinator at NAMI Glendale, since 2015. “My experience as a mother of Eliana helped me get into the organization when I had a lot of questions and fears.”
Sylvia recalls that she was very sad because of what she saw was happening to Eliana and her brother, but at NAMI she realized that all groups are led by those who are in the same situation as her.
“They understood me and were willing to help however they could, until I took the classes and trained to give the same education to other people, and then they offered me the job,” says Sylvia, daughter of Mexican and Colombian parents born in Los Angeles .
“Today, I feel proud that my daughter is fighting to get ahead and I know that she will achieve it for all her work and effort every day,” she said.
And the success of both is due to the fact that in NAMI they first see the person, not the illness of the people.