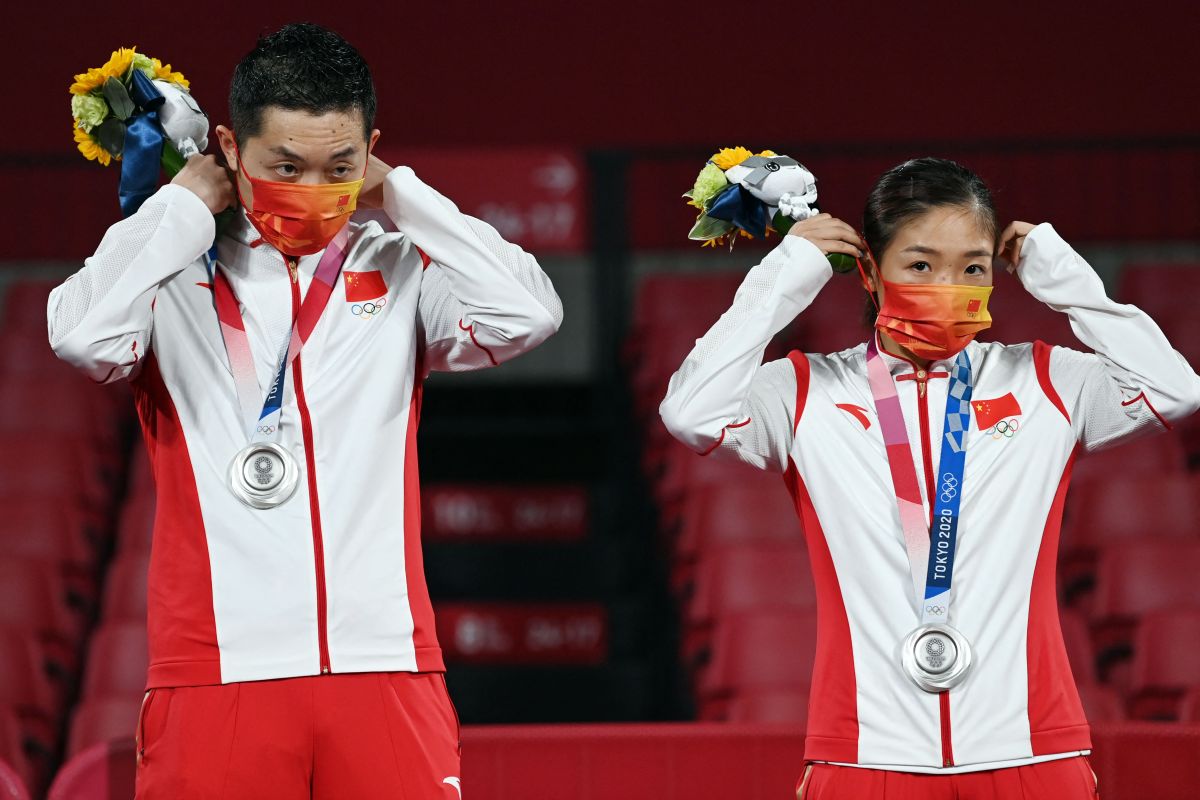 The pressure on Chinese athletes to triumph at the Olympics has never been higher and those who do not win gold are accused of being unpatriotic, as Waiyee Yip of the BBC reports.

“I feel like I’ve failed the team … sorry to everyone,” Liu Shiwen said, bowing in apology, tears in his eyes.

His peer Xu Xin added: “The whole country was looking forward to this final. I think the entire Chinese team cannot accept this result. “

Their defeat in the final against Japan, in a sport often dominated by the Chinese, has left many netizensfurious.

On the Weibo microblogging platform, some “keyboard warriors” attacked the couple, saying they had “failed the nation.”

Others baselessly accused the referees of having favored Jun Mizutani and Mima Ito of Japan.

In the middle of the nationalist fever that exploded in the country, accumulating Olympic medals has become much more than sports glory.

For the ultra-nationalist crowd, losing an Olympic medal is equivalent to being “unpatriotic”, according to experts explained to the BBC.

“For these people, the Olympic medal tables are real-time indicators of national prowess and, by extension, national dignity,” said Florian Schneider, director of the Leiden Asia Center in the Netherlands.

“In that context, someone who fails in a competition against foreigners has let down or even betrayed the nation“.

The table tennis match was an especially bitter pill to swallow because it was a loss to Japan, with which China shares a tumultuous history.

The Japanese occupation of Manchuria, in northern China, in 1931, before a broader six-year war began, killed millions of Chinese. It is still a sore point between the two nations.

For Chinese nationalists, then, the match was not just an athletic event, Schneider explained. “It is a confrontation between China and Japan.”

There was a lot of anti-Japanese sentiment on Weibo throughout the match, with Chinese users throwing all kinds of insults against Mizutani and Ito.

But the issue is not only with Japan, nor with table tennis.

Li Junhui and Liu Yuchen from China they were attacked over the internet when they lost their badminton doubles final to Taiwan.

“Aren’t they awake? They made no effort. What the fuck! ” said a user on Weibo.

Tensions between China and Taiwan have skyrocketed in recent years. China views Taiwan as a separatist province, but many Taiwanese disagree and consider their country an independent nation.

Other Chinese athletes who came under fire include sniper Yang Qian, despite the fact that he took the first gold medal of the Tokyo Games.

Why was it criticized? For an old post on Weibo where he had shown his collection of Nike shoes.

Many did not like it, as the brand is among those boycotted for its commitment to stop using Xinjiang cotton that is presumed to be harvested with forced labor.

“As a Chinese athlete, why do you have to collect Nike shoes? Shouldn’t you be leading the way in boycotting Nike? ”Read one comment.

Her teammate Wang Luyao also faced the wrath of netizens when she failed to clinch a place in the women’s 10-meter air rifle final.

“Did we send you to the Olympics to represent the country just to make you weak?” Read a comment.

The criticism of her was so overwhelming that Weibo suspended the accounts of about 33 userslocal media said.

Given the competitive nature of the Olympics, bothering about losses is not, of course, unique to China.

The criticism became so vile that several government leaders, including President Halimah Yacob, came out to ask for support for him.

But the online outrage seen in China appears to be more pronounced, and not just because its population is massive and internet savvy.

“In part, this voice is amplified because legitimate criticism of the state is increasingly unacceptable.”

Nationalism in China has increased dramatically in recent years as its global influence grows and any international criticism is considered an attempt to stop its development.

The Olympics also came on the heels of the Communist Party of China (CCP) centennial celebrations on July 1, during which President Xi Jinping delivered a defiant speech on how China will never be “bullied” by foreign powers.

“The authorities have pointed to nationalism as the correct way to understand current affairs, and now citizens are turning to that framework when they need to understand China’s role in the world,” says Schneider.

“The Chinese public has been told that national success is important, and now Chinese athletes must achieve this success in Tokyo“.

Schneider and other experts point out, however, that these angry reactionary nationalists most likely do not represent the majority of the chinyou.

“If the only voices consistently allowed are those of the loudest nationalists, it should come as no surprise that their voices can dominate online discussion disproportionately relative to their actual numbers, ”Hassid says.

Amid the outrage seen on Weibo, there was also broad support for the Chinese delegation, with some criticizing the trolls for being “irrational.”

For this reason, the state media also exhorted the public to be more “rational.”

“I hope that all of us in front of the screen establish a rational vision of the gold medals, and of victory and defeat, to enjoy … the Olympic spirit,” said a comment from the Xinhua News Agency.

Experts say this is indicative of where the “danger” lies, when nationalism seems to have gone too far, even for the state.

“The CCP tries to exploit nationalism on the internet for its own ends, but events like this show that once Chinese citizens get angry, the state has great difficulty controlling these feelingsHassid says.