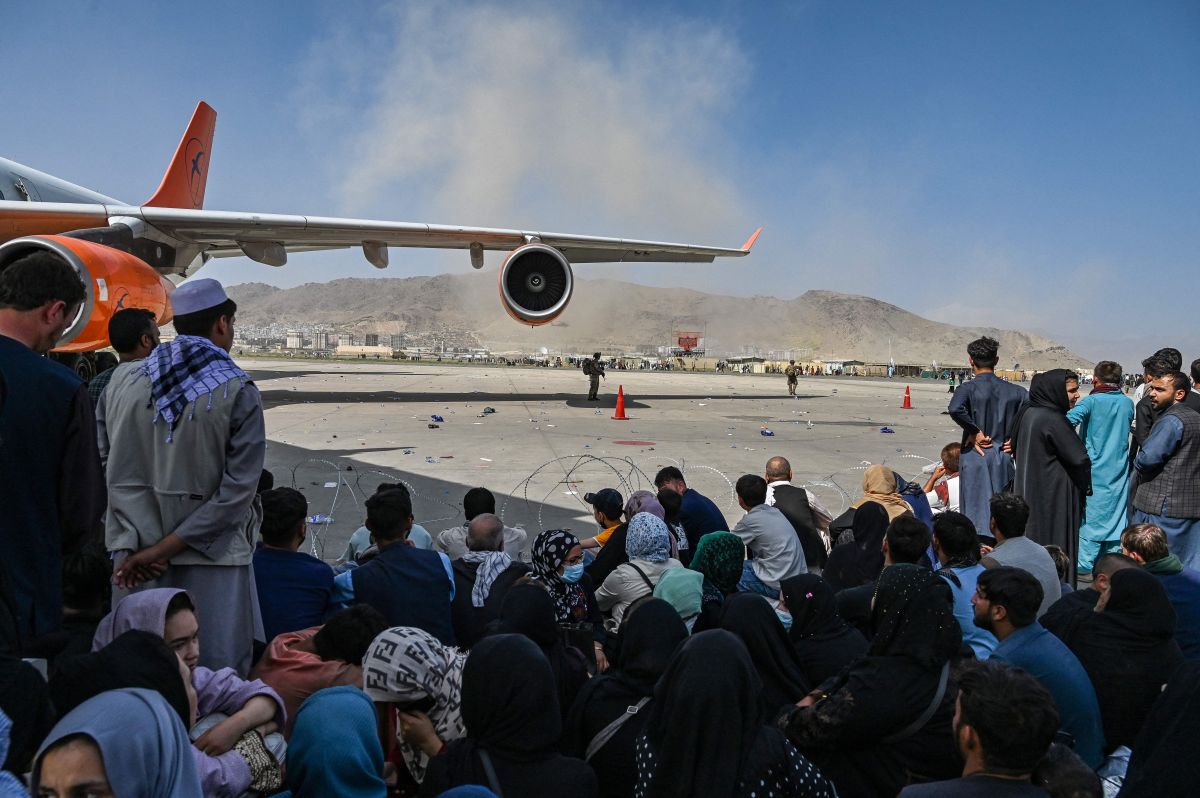 The United States Air Force confirmed Tuesday that human remains were found in the wheel well of a C-17 Globemaster III, after hundreds of Afghans desperate to escape the Taliban stormed the transport plane as it departed from Hamid Karzai International Airport in Kabul on Monday.

The Air Force Office of Special Investigations has opened an investigation into the circumstances surrounding the widely covered incident, which went viral on social media, AirForceTimes.com reported.

The military authorities confirmed that Human remains were found after the plane landed at Udeid Air Base in Qatar.

One of the videos circulating Monday showed hundreds of people running onto the runway at Kabul airport, some holding onto the side of a US military plane as it tried to take off.

Later, videos like the one below appeared, showing people falling out of the plane as the plane gained altitude.

Watch: A video shows the moment Afghan citizens dropped from an aircraft near #Kabul airport after clinging on to a US Air Force plane in an attempt to flee the country amid the #Taliban takeover. #Afghanistan https://t.co/2vc7iuFmgj pic.twitter.com/MdrNlasobn

As the United States ends its withdrawal from Afghanistan after 20 years of war, Taliban militants have quickly regained control of the nation, and thousands of Afghans are trying to flee the country.

The Globemaster III aircraft from Joint Base Lewis-McChord in Washington state arrived at Kabul airport with equipment to help evacuate Americans and Afghans seeking refuge.

“Before the crew could unload, the aircraft was surrounded by hundreds of Afghan civilians who had breached the perimeter of the airport,” Stefanek said. “Faced with a rapidly deteriorating security situation around the aircraft, the C-17 crew decided to leave the aerodrome as quickly as possible.”

“The aircraft is currently seized to allow time to collect the wreckage and inspect the aircraft before it returns to flight status,” Stefanek continued.

Operations at the Kabul airport were temporarily suspended on Monday due to thousands of people who flooded the airport’s only runway in an attempt to escape Afghanistan.

Pentagon press secretary John Kirby declined Tuesday to comment on reported victims related to Afghans who seized the plane, and noted that the Air Force would comment on it.

The Pentagon promised on Tuesday to increase evacuation flights out of Afghanistan, and Joint Chiefs of Staff Major General Hank Taylor told a news conference that 5,000 to 9,000 could be evacuated a day depending on what the Taliban allow in terms of commercial flights, following an agreement for the safe evacuation of American and Afghan civilians that was reached between the United States and the Taliban government.