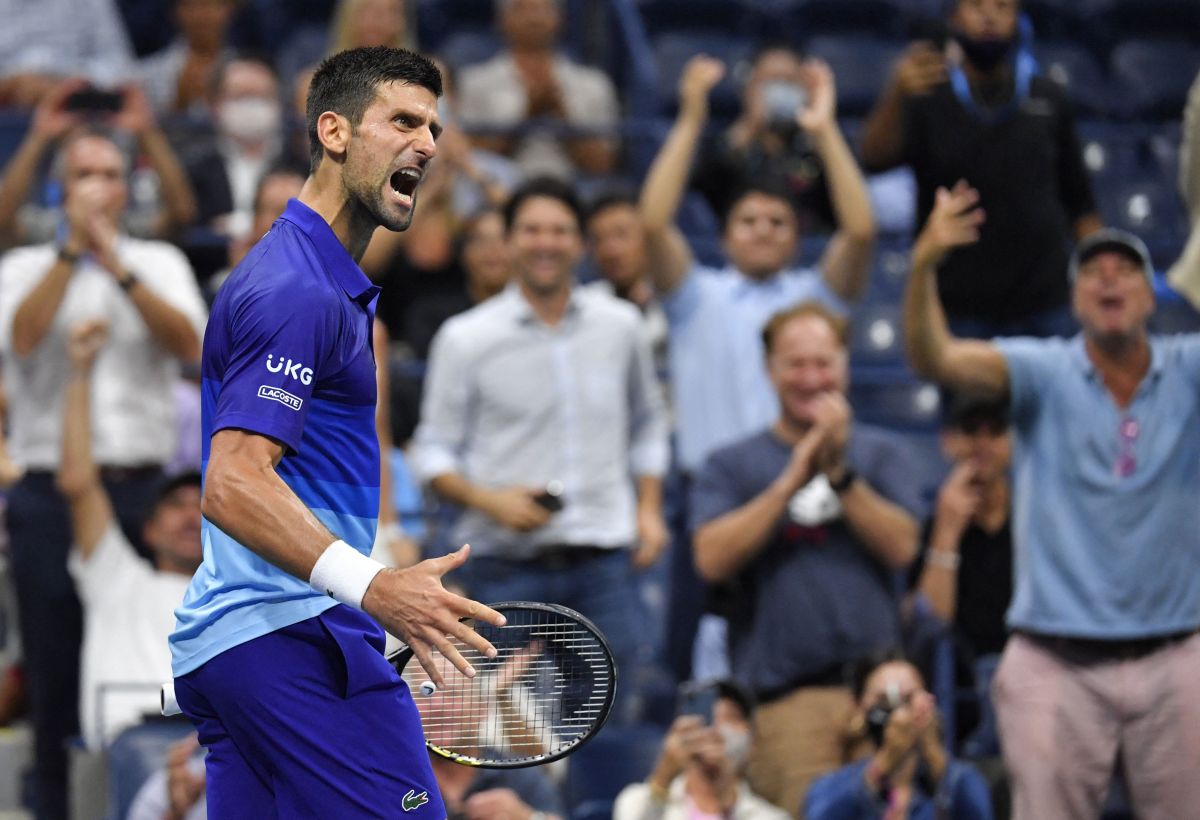 QUEENS, NY – Most tennis players will yell, address the crowd, or throw their fist in the air when they score a point with a “winner.” Novak Djokovic, who is two games away from becoming the player with the most Grand Slam tournaments in history, celebrates more than any the most defensive points, those in which it flies down the back of the track, from corner to corner, in search of the impossible balls that the public – and many times the rival – already takes for winners. He returns them, again and again, until the victim in front of him ends up failing, desperate, and losing a point that would have been taken before any other human being.

Djokovic is perhaps the best defensive player ever, among other virtues. And in this one US Open, in which he has more pressure to win than ever, is turning to that weapon more than ever.

“Djokovic first snatches your legs and then your soul“Andy Roddick said a couple of days ago. The Serbian replied that he did want to finish with the opponent’s legs, but not with his soul. “We are all precious souls,” said Djokovic still on the court in his match against American Jason Brooksby.

But the truth is that the number 1 in the world 26 souls have been surrendered to him this year in 26 Grand Slam matches that he has won in a row. The last one, tonight at the Arthur Ashe stadium, that of Matteo Berrettini, world number 8 whom Djokovic had already surpassed two months ago in the Wimbledon final. The sets were 5-7, 6-2, 6-2, 6-3.

On Friday, the 27th victim will be Alexander Zverev, the world number 4, in the US Open semifinal, the penultimate stumbling block before the long-awaited fourth big of the year, something that no man has achieved since Rod Laver in 1969. Djokovic could even have aspired to the “Golden Slam”, but Zverev beat him in the semi-finals of Tokyo 2020.

“[Zverev] he’s in great shape, coming from Tokyo and Cincinnati and reaching the semi-finals here. It will be a very difficult match, ”said Djokovic about his next opponent as soon as the game ended tonight.

Djokovic, as in eight other Grand Slam matches this 2021, yielded the first set to Berrettini. The Serbian started hesitantly with his serve, which he maintained with problems in the first game of the match despite committing two double faults and having to save a break point.

In a disputed sixth game Djokovic had his chance, but Berrettini defended two break balls to keep the score even.

Immediately afterwards it was the Serbian who struggled but overcame two break balls against with an incredible defensive game, reaching Berrettini’s balls from corner to corner.

At 5-5, Berrettini achieved the first break of the match on his fourth break ball with a good defense culminated with a crossed passing. In the next game, after four set balls, the Italian took the set 7-5.

Another match from the second set

At the beginning of the second set another match seemed to start, as if Djokovic had been studying his rival until then, waiting for his moment. As soon as the Italian dropped the intensity a degree, the enormous difference between the two tennis players appeared today. Although he is number 8 in the world and has played Grand Slam finals and semi-finals, Berrettini has never beaten a Top 10 in a “big”.

Djokovic opened the set keeping his serve with a blank game. And in the fourth game, implausibly subtracting the cannon shots from Berrettini, he achieved the break that made him dominate the set.

The Italian hit a slump after the break and lost the first three points of his next service game by throwing three comfortable balls into the net. Berrettini was getting small on the track of Arthur Ashe at the same time that Djokovic grew and took a set in which he only committed three unforced errors.

The third set started as the second ended: with the Italian hesitant and without weapons to hurt Djokovic, who returned both the exchanges from the back of the track and the attempts to drop. The Serbian was a wall that had become impenetrable and achieved the break at the first change to direct a set that would end like the previous one: with a resounding 6-2.

Novak to crowd: get 🆙 pic.twitter.com/MTkwVJ1TDl

After the third set, half of Spectators from the largest tennis stadium in the world began to parade to line 7 of the New York subway. The most fans of Djokovic remained, who in the fourth set encouraged even more with shouts of “Nole, Nole!” While on the track a procedure was developed that the two athletes knew how it was going to end.

With this, Djokovic reaches his 80th victory at the US Open, one more than Andre Agassi, only behind Jimmy Connors (98) and Roger Federer (89).

Chapter 🔟 of this rivalry is set for Friday 🍿 #USOpen pic.twitter.com/faNCJRQo8j