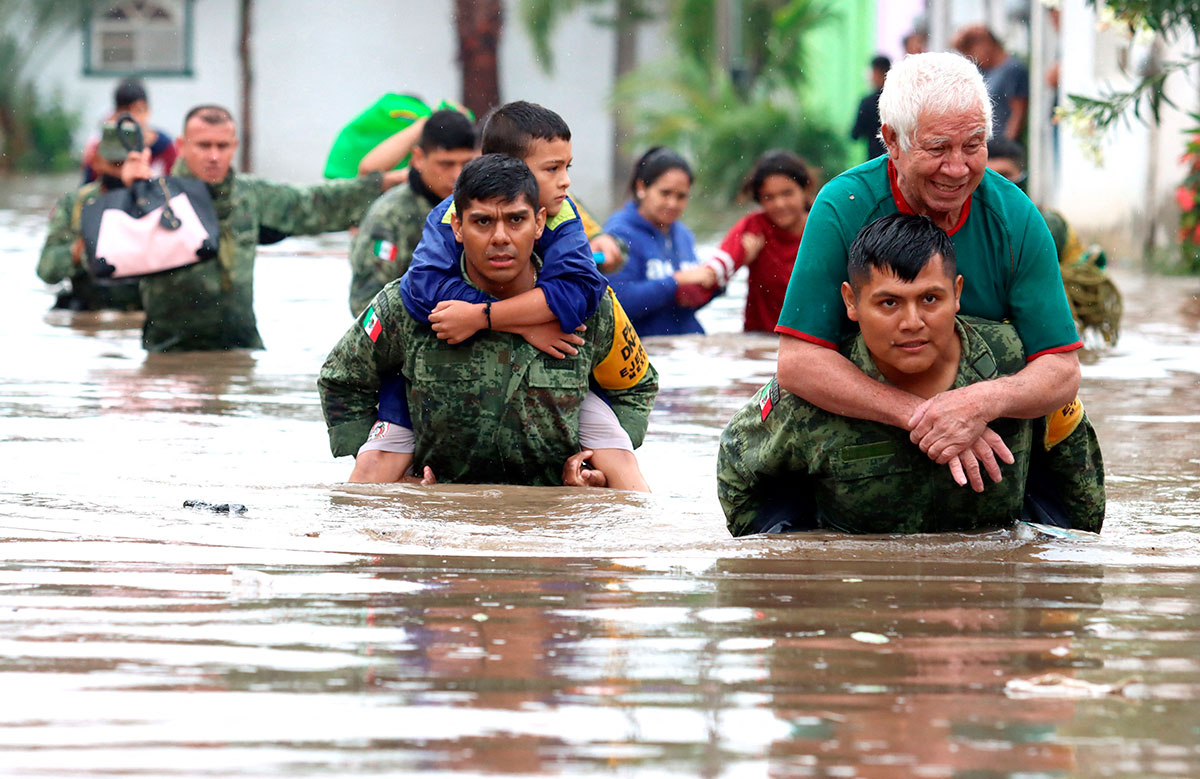 The States of Mexico, Hidalgo, Jalisco, Oaxaca and Sinaloa, among others, were severely affected by the heavy rains that fell from Monday night and early Tuesday morning in Mexico.

“It is raining a lot, yesterday we had floods in many states of the country. This is the month that rains the most in Mexico and that is why they are suffering from floods, that is why we are vigilant. Today we are going to be helping, supporting all the families, ”said the President of Mexico, Andrés Manuel López Obrador.

The medical staff of the IMSS hospital in Tula launches an SOS due to the level of damage. #NowMore with @UrielEstradaTV pic.twitter.com/iKMYTNq9y4

In Tula, in the State of Hidalgo, the intense rain caused the flooding of the Regional Hospital Zone 5 of the Mexican Institute of Social Security, where so far 17 dead patients have been reported.

There were 16 dead left by the flood in General Hospital No. 5, in Tula #Gentleman, as confirmed by government authorities
After the overflow of the Tula River, there would also be 36 thousand people affected in nine neighborhoods. pic.twitter.com/oxWXmeefSp

This is the panorama of the IMSS Hospital in Tula de Allende after the overflow of the River that keeps the city under water. Hundreds of homes affected, hospital completely flooded on its first floor, cars under water. And national media report at least 10 deaths pic.twitter.com/9NFQFzxl8z

“Unfortunately the rains in Hidalgo are causing a lot of damage, there is a serious flood situation in the Tula region, Civil protection is already acting, everything that has to do with the DNIII Plan to support the population is being implemented ”, informed the President of Mexico Andrés Manuel López Obrador in his morning conference.

Yesterday’s rains in Hidalgo caused the Tula river to overflow, flooding the GZ No.5 Hospital of the IMSS; causing the death of 16 patients (the rest are being evacuated). The DNIII plan was applied. There are more than a thousand elements to serve the affected population. pic.twitter.com/GaawRA4Omb

According to Civil Protection authorities and the Mexican Institute of Social Security, patients died after the Tula River overflowed causing flash flooding up to 5 meters high from the hospital.

Yes, that’s how they are taking the babies into incubators at the IMSS hospital in Tula. The citizens, the neighbors, with what there is, with what can be 👇 pic.twitter.com/mBFgXbqN5X

In Ecatepec, State of Mexico, two people lost their lives and several neighborhoods were affected by the historic waterfall which reached more than two meters in height. Neighbors of the place managed to rescue a baby trapped in a vehicle.

Neighbors of Ecatepec rescued a baby that was in a position washed away by the current, after the floods on Monday.

The Ecatepec Civil Protection coordination indicated that a 17-year-old girl and a 73-year-old man lost their lives. The first after a lightning strike from the storm caused him an electric shock, while the second died after being swept away by the current.

This is how they saved a baby who was trapped in #floods from #Ecatepec. Strong water currents and waterfalls paralyzed the streets after heavy rains in neighborhoods such as La # HankGonzález, #Tulpetlac, #CityAzteca and #San Cristobal: pic.twitter.com/oFSekMsM35

🌊🌧 In Ecatepec: with #brunette “The best is yet to come”, Aha, here is the sample! Flood problems will continue if there is no real political will to fix things. The most affected, the poor of #Ecatepec.

In Zapopan Jalisco, a house collapsed due to the water current that destroyed everything in its path, while in Sinaloa, several colonies of the entity were affected.

In Zapopan, #Jalisco, the floods do not give truce. This weekend the Seco stream overflowed. pic.twitter.com/w5kiYz1MMK

The emergency due to the accumulation of water in streets and avenues was also observed in the States of Sinaloa and Oaxaca where people tried to rescue their belongings.

Downpour and flooding in oaxaca pic.twitter.com/yLlEtT3xz3

“El Quelite” vehicular bridge collapses after rains and floods through the passage of #Nora. Circulation closure between km 051 to 136 highway # Mazatlan–#Culiacan #Sinaloa pic.twitter.com/Rc60K6pygu

According to the National Meteorological Service (SMN) heavy rains will continue in the next few hours in Mexico City, State of Mexico, Durango, Guanajuato, Hidalgo, Morelos, Querétaro, Sinaloa, Sonora and Tlaxcala.