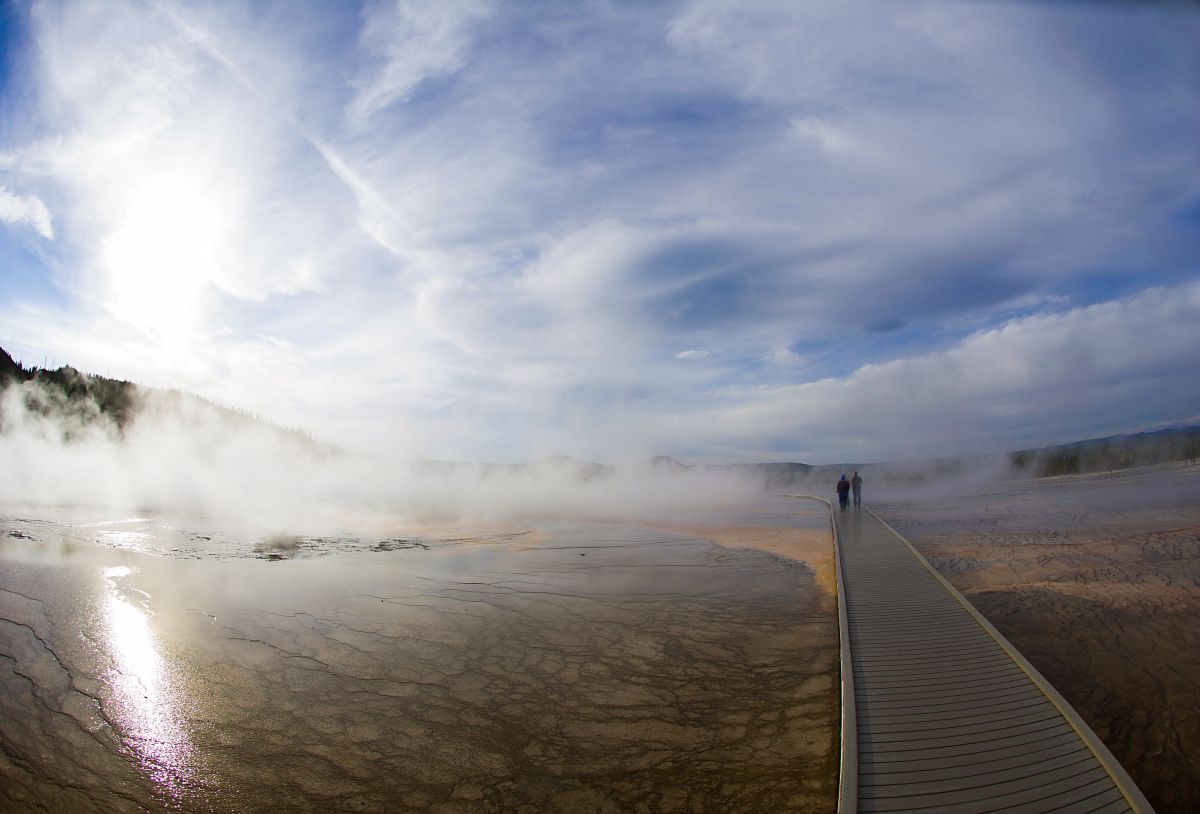 The Yellowstone National Park will remain closed to visitors through at least Wednesday due to dangerous flood conditions.which prompted evacuations from the park and left some surrounding communities trapped without safe drinking water, officials say.

The park announced Monday afternoon that all park entrances were closed to visitors, citing “record flooding” and a forecast of more rain to come.

“Our first priority has been to evacuate the northern section of the park where we have multiple road and bridge failures, mudslides and other issues,” Yellowstone Superintendent Cam Sholly said in a statement.

Immediately north of Yellowstone, Several towns in Montana’s Park County are also experiencing major flooding, which has washed out bridges and roads, making it unsafe to travel or impossible to evacuate, county officials said in a Facebook message Monday.

The Officials also issued warnings in many areas for residents to avoid drinking local water due to a broken water main and submerged wells.

“The river has never been this high at my house before,” said Elizabeth Aluck, who lives in Gardiner in Park County.

Aluck told CNN Monday afternoon that he can’t evacuate because the roads and bridges around his home are destroyed.

An Indiana family staying in a short-term rental cabin in Gardiner told CNN they were supposed to leave Monday morning, but flooding left them stranded.

“The water levels were high on Saturday, but in the last 10 to 12 hours things have gotten more difficult,” Parker Manning said. “Our way out of town would be north on 89, but those roads are currently all under water.”

The Yellowstone River, which runs through the park and several Park County cities, swelled to a record level Monday due to recent heavy rains and significant runoff from melting snow at higher elevations, according to CNN Meteorologist, Brandon Miller.

“The river continues to rise near Livingston, and is expected to peak between 6 p.m. and 9 p.m. Monday,” Park County officials said on Facebook.

In recent days, across the country, extreme weather events have hit communities, including thunderstorms that left nearly 300,000 customers without power in the Midwest, a tornado threat in Chicago, and a severe heat dome that has left more than a third of the US population under heat alerts.

With several roads and bridges rendered impassable by flooding, park and county officials are working to evacuate those who can and provide support to those who cannot leave.

The Park County Sheriff’s Department issued a shelter-in-place order until 7 a.m. Monday for those south of mile marker 52.5 on Highway 89 south, according to the Facebook post.

The National Guard and local search and rescue teams were assisting with evacuations and rescues throughout the county, including two airlifts and a rapid water rescue, the county said.

Several communities in Park County are isolated and surrounded by water, including Gardiner, Cooke City and Silver Gate, according to an update on the county’s Facebook page.

Meanwhile, several roads and bridges in Yellowstone have also been compromised by flooding, park officials said.

Videos posted by the park show portions of the paved trail washed away or severely eroded.

Due to predictions of higher flood levels and concerns about water and wastewater systems, the park also began moving visitors out of the park’s southern loop on Monday, Sholly said.

“We won’t know when the park will reopen until the floodwaters recede and we can assess the damage throughout the park,” Sholly said. “The northern loop is likely to be closed for a considerable time.”

In June, precipitation in northwestern Wyoming and southern Montana was more than 400% of the regional average, according to Miller.

The dramatic increase in rainfall has added to near-record temperatures in the region that have caused melting of ice in high-altitude areas, the National Weather Service (NWS) in Riverton, Wyoming, said.

Overnight on Sunday, melting snow reached creeks and rivers, adding to the flooding, the NWS said. In addition to the record set at Corwin Springs, the Yellowstone River reached 10.9 feet in Livingston, Montana, surpassing the 1997 area record of 10.7 feet on Monday, the NWS in Billings, Montana said.

Read more
* Terrifying video shows how amusement ride is released in the air and parents see their children fall to the ground
* Pope Francis said war in Ukraine may have been provoked, but criticized Russia’s cruelty
* Ukrainians trapped with no way out in besieged city as Russian forces destroy last bridge