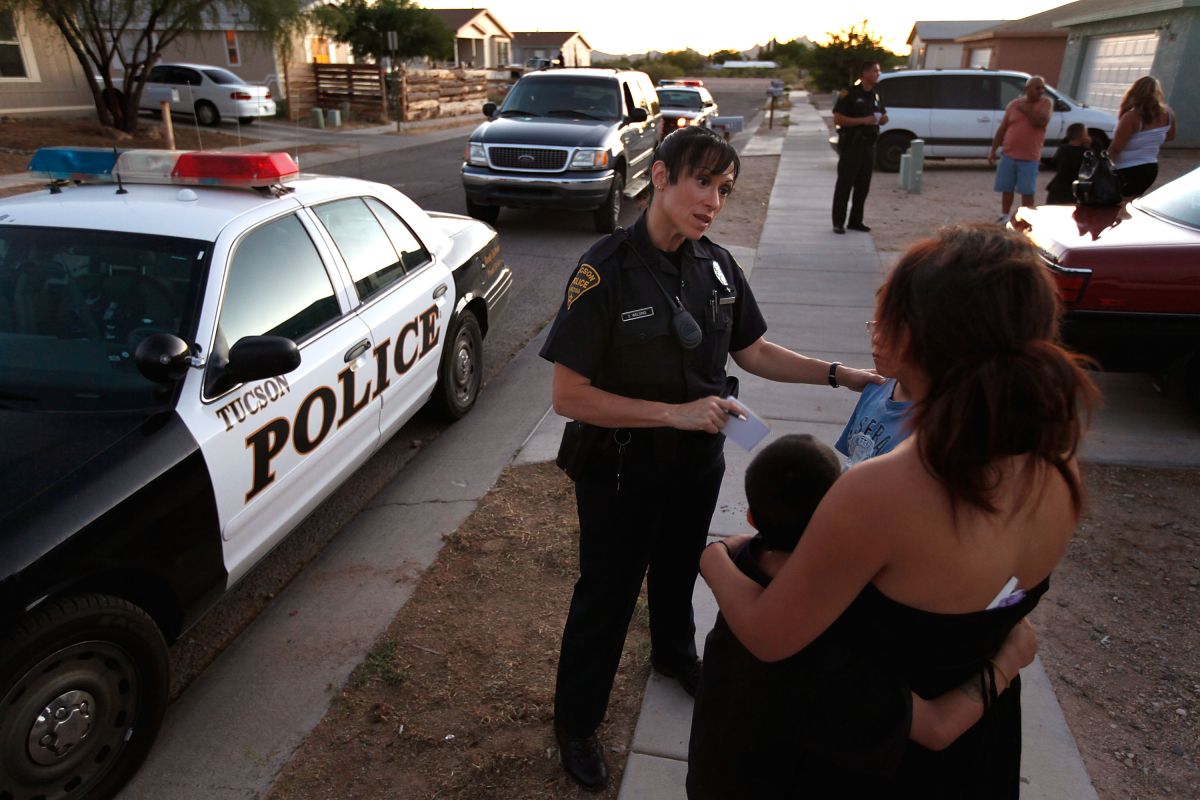 A video posted on social media showing a 13-year-old girl being punched multiple times in the face by a Phoenix police officer is sparking outrage in the community and online, but the agent claims the teen struck the first blow.

Police are investigating the incident that stemmed from an arrest of suspects in a stolen car found at an apartment complex on the city’s west side on January 31.

In body camera footage later released by police, Taylor Thomas, 13, is seen inching toward an officer despite his warnings to stay back.

The scene quickly turned chaotic as the teen ran across the parking lot and was tackled to the ground by an officer who punched her repeatedly in the face.

The disturbing incident was caught on video by the teen’s aunt Charlene Thomas.

“I’m screaming ‘she’s underage!’ They will lock me up when I tell them…even when I told them I was underage, they didn’t stop,” Charlene said.

“He was still hitting her when he had her on the ground. He could have stopped and done something else instead of continuing to hit her.”

Police responded to the growing outrage by publishing what they say is a fuller picture of the incident and claiming the teen interfered with an arrest, despite being ordered to stay behind.

“A female officer saw her approach the officers and grabbed her arm to pull her back,” Phoenix Police Sgt. Ann Justus said in a statement.

“The woman swung her arm at the officer, hitting her on the right side of the face. The officer’s body camera became detached at that time and can be seen, on other officers’ body camera videos, flying out of her vest. The female officer responded to the hit by punching the teenager in the face.”

Taylor Thomas received treatment for minor injuries and was booked into the Juvenile Correctional Center on one count of aggravated assault on a police officer.

The incident occurred around 4:30 pm. at an apartment complex near 61st Avenue and McDowell Road when officers arrived to investigate a report of a stolen car that had been seen with people inside.

“This was a call from a stolen vehicle occupied by multiple people inside, including the minor female in the video,” Phoenix Police Sgt. Ann Justus said in a statement.

“At least two people, including that minor, were arrested on charges including aggravated assault on a police officer.”

But the girl later told FOX10 a different story.

“I was never in the stolen car,” he said. “I was outside with four kids getting ice cream.”

Police released an update the next day confirming that the teen was not inside the stolen car, but that she approached officers and refused to stay behind.

“The woman then walked past officers who ordered her to stay back, and quickly approached two officers who had a male in custody,” police said.

Multiple recordings of the ensuing beating were posted online, prompting police to come forward with a statement using their own body camera footage.

The Phoenix Police Department is aware of cell phone video in circulation showing a snapshot of the incident.

“In an effort to share the facts, we are releasing some of the body cameras to provide more context,” Justus said.

Justus detailed the incident, which he said began as officers were making arrests related to the stolen vehicle investigation.

“Four men got out of the car. The officers were pulling them over, people started gathering, several of them filming the officers,” Justus said. “Other officers told bystanders that they had to stay behind during the arrests.”

Javon Johnson, 25, allegedly punched an officer in the face and grabbed the officer’s gun, prompting other officers to rush to help.

“One woman, who was later found to be 13 years old, still approached officers as they were holding people back,” he explained.

“He was warned multiple times to come back. She walked in front of the officers as they were trying to put one of the men in the back seat of a police car and an officer pushed her out of the way.”

In the video, Thomas, wearing a gray hoodie and brightly patterned leggings, is seen walking closer to the officers, despite their orders to stay back. She is heard cursing and walks out of the video frame just before she is shot down.

Another angle, showing the incident from above, shows the teen running across the parking lot toward the sidewalk, right next to a group of officers.

An officer is seen grabbing the teen and begins beating her, while knocking her down and continuing to beat her.

“I thought my niece was going to be knocked unconscious from the way the officer hit her,” the teen’s aunt said. “I was devastated.”

Although the teen was not involved in the stolen car investigation, the family was appalled that she was being treated this way and wanted the department to be held accountable.

The incident has drawn the attention of many in the community and on social media.

Nancy Ochoa, a neighbor of the teen, told NBC12 that she saw what happened.

“She went in to try and get a closer look this way, that’s when the police officer grabbed her and started beating her,” Ochoa said.

“The poor girl, she is traumatized. His face is swollen, he has cuts all over his eye,” Ochoa said.

Charlene Thomas told FOX10 that her niece is being wrongfully accused of assaulting an officer and is demanding that the department be held accountable.

The department says the incident remains under review and investigators continue to gather information.