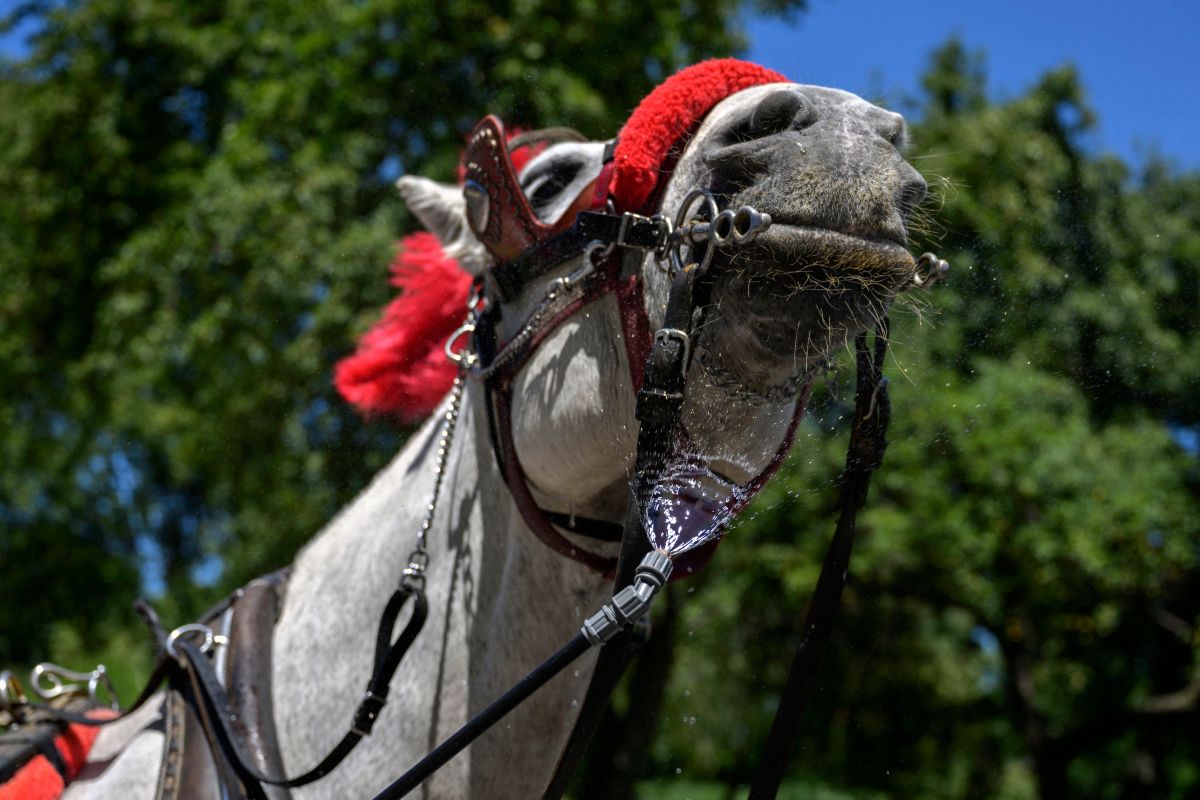 New York police came to the rescue of a tourist carriage horse that collapsed on a hot city street last Wednesday, prompting fresh calls to end the controversial tourist attraction.

The crowd swelled on Ninth Ave. and 45th Street in Manhattan’s Hell’s Kitchen neighborhood after the horse collapsed and the carriage driver was seen whipping the animal with the reins in an attempt to get it to get up.

Kelvin Gonzalez, a witness at the scene, told NBC New York that he watched the scene in horror. He “he started whipping and saying ‘Get up, get up. As a brother, don’t whip your horse, he obviously needs some water, he seemed dehydrated,” Gonzalez said.

The New York City Police Department said officers responded around 5 p.m. “Upon arrival, patrol officers observed a carriage lying in the middle of the roadway in distress,” police said in a statement.

Here are the images of the horse being sprayed with water by the NYPD shared on the Twitter account of the animal protection organization PETA:

Mounted officers hosed the horse down to help lower its body temperature, according to police. Video from the scene also shows that a pillow was placed under the horse’s head.

The horse finally put its head down on the pavement and the driver was forced to withdraw his carriage. Here is the video in which the horse manages to stand up again:

The horse was taken to a stable about 10 blocks away, where it received care from a veterinarian. Police said the horse was conscious Wednesday night.

It is not new that organizations dedicated to animal protection seek the elimination of tourist attractions that have to do with the “abuse” of some species.

It is the case that the city of New York has lived for years, since thousands are opposed to these animals being “exposed” before various dangers in a large city.

In fact, the director of PETA (People for the Ethical Treatment of Animals) Ashley Byrne, published a statement on the website in response to what happened with “Ryder”, the horse that collapsed yesterday, and who is supposedly sick.

“Just a few weeks after a horse in the New York City carriage trade collapsed and died in his stall, another horse collapsed yesterday and remained on Ninth Avenue for over an hour without veterinary care while being slapped by his driver. , whipping him and screaming to get up,” Byrne said.

“The city’s horse-drawn carriage trade has been plagued for years by allegations of mistreatment and overwork of horses, and PETA is calling on the NYPD’s Animal Cruelty Investigation Squad to launch an investigation. criminal about this incident,” he said.

Also read:
· They find a missing Hispanic dead on the beach in Queens, New York; police suspect homicide
Minnesota mom sues Walmart after her 6-year-old daughter was killed in the parking lot
· Fleeing from police at traffic stop driver ran over baby and two adults in Queens, New York