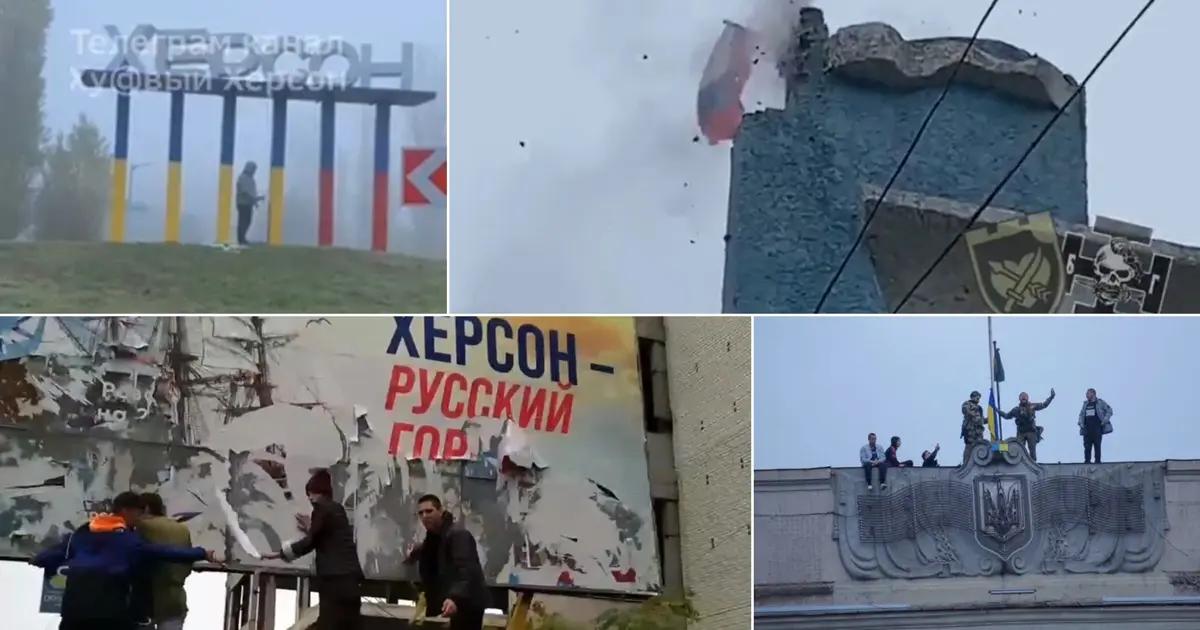 After the viral images of the joy of the locals in the town of Kherson, who greeted the Ukrainian Armed Forces’ soldiers with tears and then lit up a veritable bonfire of joy, new images show how Ukrainians have begun to remove the symbols left by the Russians.

Some Ukrainians took to painting the entrance to the city in Ukrainian colors, covering the red, white, and blue left by the Russians. On the Antonovsky Bridge, Ukrainian soldiers unloaded their automatic weapons into the Russian flag flying on a pillar.

In other parts of the city, Ukrainians manually peeled off, piece by piece, the banners stuck by the Russians.

For Russia, the liberation of Kherson marked its worst defeat on the battlefield after the Russian Defence Ministry said Moscow had withdrawn some 30,000 troops.

The withdrawal comes six weeks after Russian President Vladimir Putin announced the “annexation” of Kherson and three other regions in a large-scale ceremony in Moscow.

Russian state TV channels are silent about the withdrawal from Kherson, while a wave of criticism floods patriotic channels.

While Russian TV stations are saying little about Vladimir Putin’s troop withdrawal from Kherson, which Volodymyr Zelensky called a “historic day,” the propagandists are commenting intensely on Telegram channels, and Russian bloggers are condemning the decision, Meduza notes.

Several Russian TV channels, Channel One, Russia 1, and NTV, aired a ten-minute official Russian Defence Ministry video on Wednesday evening in their news programs, in which General Sergey Surovikin reported to Minister Sergei Shoigu on the need to “regroup forces and take over defense on the left bank of the Dnieper”.

Channel One and Russia 1 also broadcast reports on how residents of the Kherson region, who left there after appeals by Moscow-imposed authorities, were given certificates for apartments in the Stavropol region.

On the other hand, the withdrawal from Kherson has been widely discussed on the Telegram channels of Russian journalists loyal to the Kremlin.

Many of them pointed out in their posts that the decision to leave the city was correct and saved the lives of many soldiers, also mentioning that miscalculations by the previous command led to this decision.

At the same time, many pro-government bloggers made their own detailed assessment of the situation, lamenting that in the eyes of the population, the surrender of Kherson would be a “defeat,” while some openly criticized the actions of the Russian army and even called the withdrawal “treason.”

The city of Herson was a major prize for Vladimir Putin.

Why is the Russian withdrawal a major blow to the Kremlin leader?

CNN reports that Russia’s announcement that it has completed its withdrawal from the key city of Kherson and nearby areas is one of the most significant moments of Vladimir Putin’s war in Ukraine on 24 February. Kherson was the only Ukrainian regional capital that Russian forces have captured since the February invasion, a major prize for the Kremlin leader.

The southern Ukrainian region was one of the Russian army’s main targets in the early days of the invasion, and its occupation was vital for the Russians to advance toward Mykolaiv and Odesa, two of the country’s most important southern cities.

As Russian troops withdrew, Ukrainian forces advanced cautiously amid warnings from Kyiv that the Russians would leave traps behind. The Ukrainian military broadcast Friday that Russia is destroying critical infrastructure as it retreats, shelling newly vacated territory from new defensive positions on the eastern bank of the Dnieper River, according to CNN.

On Friday, the main bridge across the Dnieper River connecting the town of Herson to the eastern part of the region collapsed, making it difficult for Ukrainians to pursue the Russians fleeing across the river.

While the Kremlin has tried to put the withdrawal from Herson in the best possible light, it is undoubtedly a humiliating failure for President Vladimir Putin. And while the Kremlin spokesman insisted Friday that the Kherson region remains part of Russia, CNN adds that the facts tell a different story.