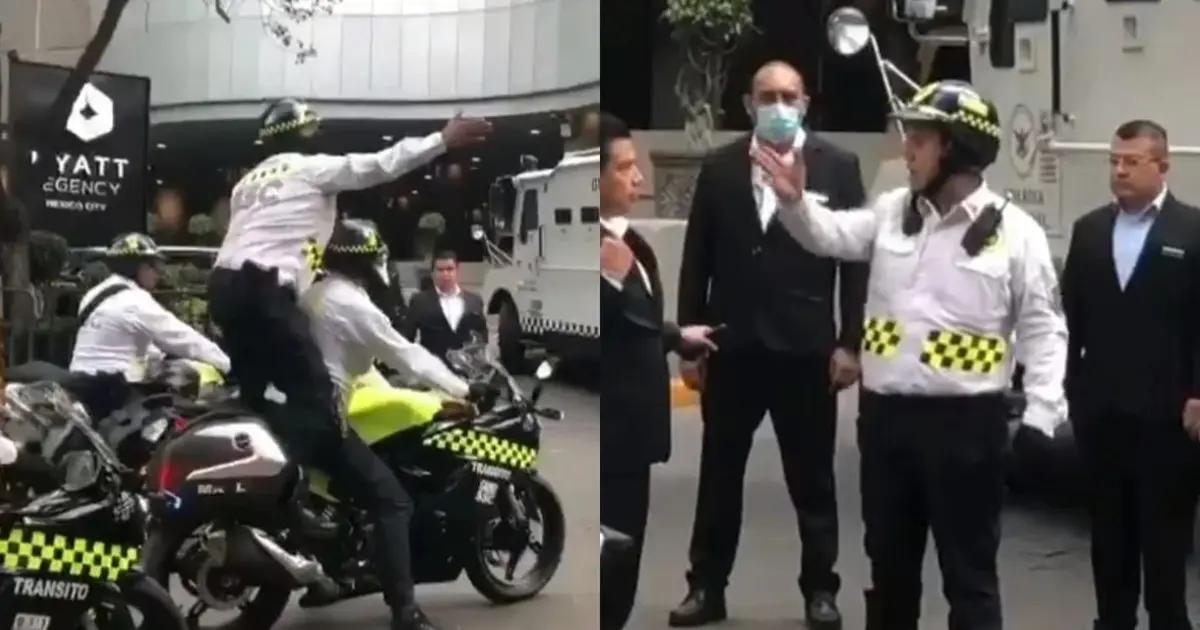 Moments of confusion and chaos were experienced yesterday during the transfer of the Prime Minister of Canada, Justin Trudeau, in Mexico City, as the lack of logistics between elements of capital security, the Mexican National Guard, and U.S. agents caused traffic police to have to shout for permission to give way to the Canadian entourage.

This was evidenced when, upon the arrival of the Canadian minister to his hotel on Paseo de la Reforma Avenue, a member of the capital’s traffic police had to resort to shouting when he could not open the way with horns and sirens.

The moment was recorded in a video that soon went viral on social networks because of the words the policeman used to ask to pass to the Marriot hotel, insisting that he “brings the one from Canada,” in reference to Justin Trudeau.

“I’m going to turn around, I bring the one from Canada, how not, take it off, give me canche! I’m bringing the Canadian, where do I go? I’m going to the Marriott”

The agent from the capital, who was leading the formation, insists that he has to take “the one from Canada” to the hotel, but he does not manage to convince the elements that keep the road blocked as part of the device deployed for the security of the U.S. President, Joe Biden.

Seconds later, and in the face of the refusal of the elements to grant access, the policeman got off his motorcycle to explain the situation, at which point they allowed the Canadian entourage to enter.

The audiovisual, of a little more than a minute and a half, generated criticism and mockery on social networks, as several users indicated that such comments were typical of “chilangos,” while others criticized the logistics of the capital’s authorities.

“Chilango moment,” “I love Mexico a lot,” “Justin Trudeau’s ticket was cloned, and they wouldn’t let him through. Enough with Ticketmaster,” and “My magical, comic, musical Mexico” were some of the jokes made by cybernauts.

“Clearly, Mexico is pacifist because in a war they undo us the first time only because of the level of logistics we have… and the physical condition of those who take care of us”

Meanwhile, others expressed their disagreement with the performance of the authorities: “High level of logistics,” “So is the organization and logistics in all the 4T, thought with the legs,” and” Government of 4Ta, inefficiency at its best!”.

It should be recalled that the logistics and security arrangements for state visits were in charge of the Presidential General Staff, an elite corps that was disintegrated at the beginning of the administration of President Andrés Manuel López Obrador (AMLO).

On Monday morning, President López Obrador went to the Felipe Ángeles International Airport (AIFA) to receive the Prime Minister of Canada, Justin Trudeau, who arrived in Mexico to participate in the 10th North American Leaders’ Summit.

The Canadian president arrived at AIFA shortly before 3:00 p.m. accompanied by his wife, Sophie Grégoire Trudeau, who received a flower bouquet from Dr. Beatriz Gutiérrez Müller, who was present at the reception along with the Secretary of Foreign Affairs, Marcelo Ebrard.