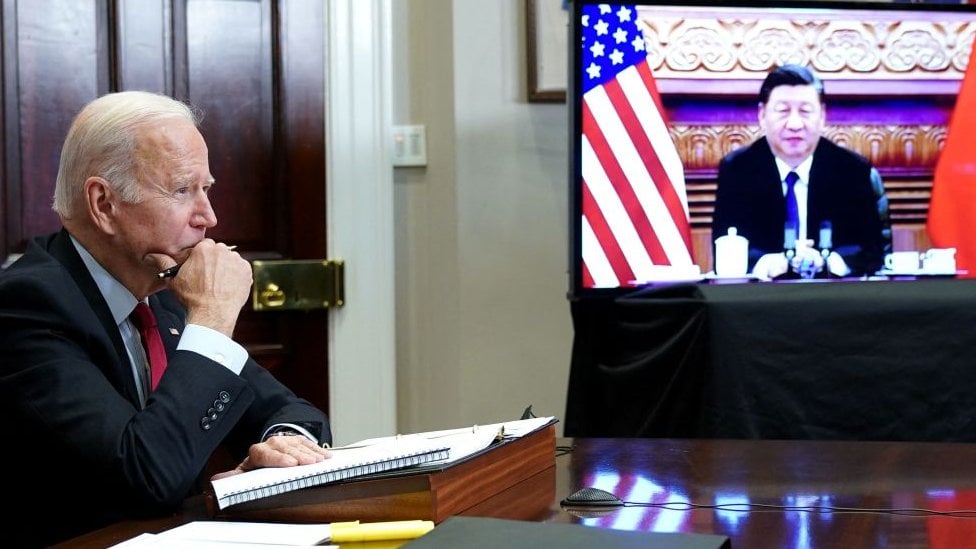 The war in Ukraine and the pandemic are accelerating a dangerous trend between the United States and China, the two most powerful countries in the world.

That is the view of researcher Michael Schuman, who maintains that the coincidence of these two catastrophic events is pushing the world towards a scenario in which both powers accentuate their rivalry.

According to Schuman, the sanctions that the United States has imposed on Russia for its invasion of Ukraine serve as caveat to China in case it decides to support the Russians in the war.

Fear of such stockings could be pushing China to speed up its project to lessen its dependence on the West, says Schuman, a nonresident fellow at the Atlantic Council China think tank.

On the other hand, the zero covid strategy adopted by China has put a strain on the world trade.

The uncertainty generated by the massive lockdowns in China has created greater pressure for countries to seek different providers to that country.

In this scenario, Schuman maintains, China and the US are moving away from the globalized world that was expected after the fall of the Soviet Union, and are on the way to consolidating themselves as two spheres of power.

In an interview with BBC Mundo, Schuman explains what this panorama consists of, and the dangers what it represents to the world.

Michael Schuman is the author of the books “Superpower Interrupted: The Chinese History of the World” and “The Miracle: The Epic Story of the Search for Riches in Asia” (for their literal translations into Spanish).

Is the world heading towards a new Cold War?

I think the comparison with the Cold War is not accurate.

There are, of course, some general similarities related to some elements of what is becoming the ideological competition between a US-centric sphere and a China-centric sphere.

And elements of democracy vs. authoritarianism are seen.

But in several respects it is much more complex than the Cold War.

The United States and Europe obviously had some interaction with the Soviet Union and its allies, but they were not particularly integrated, especially economically.

What we had were practically two worlds, one facing the other.

Also, there is this tremendous cultural exchange, the technology is different and people are more connected.

I think that even though we are heading into a world that is reminiscent of the bipolar world of the Cold War, relationships in this bipolar world are going to be much more complicated.

It will be a bipolar world but it will be very different from that of the Cold War.

What would those two poles of power be like?

We will see different political and social systems.

On one side will be the US and its allies who are generally open democracies and liberal capitalist economies.

The other sphere will be based on China, with different norms and values.

They will also be separated by technology.

There is already a growing distrust in various parts of the world regarding Chinese technology. We see what happens with Huawei, for example.

And China obviously has a tremendous mistrust of technology that comes from the United States or elsewhere, which is why they block so many American social networks and internet companies.

So I think we’ll see two spheres based on different technologies.

And we will also see, especially on the part of China and its allies like Russia, a desire to reduce their dependence and their economic ties with the US and Europe.

A self-sufficiency campaign is underway in China.

So while they won’t be completely separate, I think there will be a move in the direction of having closer economic connections within each sphere.

How would the rest of the countries align in that bipolar world?

It is difficult to know, it depends on the calculations of each country.

Vietnam, for example, is not that it has a good record with the US and it is a communist government, it is not democratic.

But the Vietnamese are very concerned about the growing power of China. They were at war with China in 1979, they have disputes in the South China Sea… so one sees a certain rapprochement between Vietnam and the US.

Between Vietnam and the US there is a strengthening of economic ties.

Pakistan is another example.

It is technically a democracy and was an ally of the US during the Cold War, but economically it is increasingly tied to China.

So it will not be easy to know how the two spheres will form.

doThere will be non-aligned countries with neither of the two spheres?

It’s just like in the Cold War, even the countries that preferred to remain non-aligned, ended up being somehow led to lean in one direction or the other.

Some of them will make it, but it is inevitable that as competition between these two spheres grows there will be pressure on countries to at least lean one way or the other.

For many countries it will be difficult to know which side to be on, as was the case during the Cold War.

There will be many countries that will not want to take sides and will try to work with both spheres.

For some countries it will be difficult to make that decision.

India and the US are starting to align more and more in their attitude towards China, but Indians have historically been wary of becoming too close to the US.

In Africa there are several countries that are becoming closer to China, they are becoming great economic allies.

But at the same time, Western countries, donors and institutions are extremely important to some of these African countries.

Why do you say that this bipolar world is dangerous?

With the end of the Soviet Union, we thought great power competition was over, at least for a while.

We believed in the nature of the global economy, the increasing integration between countries, the way technology would bring countries together, that there would be more interaction between people.

We thought we would have a world with shared values, norms and economic interests.

In the 1990s and in the early years of the 21st century we thought we would move in that direction.

And it could be said that this world would possibly be less conflictive and with greater economic benefits.

But if the world is going to be divided in two again, then we have the return of competition between the powers, with all that that implies.

Even if that does not imply a war between the two powers, we are talking about a high level of tension and less economic integration.

None of this is positive for stability and prosperity.

What is China doing to decreasenuir your dependency on the US?

China considers that the country is very vulnerable to the sanctions that the United States and its allies may impose.

I think China is looking at what is happening with Russia right now, the way the US and its allies have come together to impose harsh and painful sanctions on Russia.

China sees that and says “that is exactly what we are afraid of”.

We see, for example, what they are doing with semiconductors, which represents large imports for China.

If you don’t have access to these chips, it is a great damage to your economic future.

They are also, for example, trying to develop their own commercial aircraft industry to compete with Boeing and Airbus.

So China is reorienting itself. They are not going to close completely, they want to continue exporting, and increase their economic ties with countries like Russia, but in other aspects they are trying to withdraw from the world as a way of defending themselves.

And what is the United States doing to depend less on China?

The US doesn’t really have any plans in that regard, it’s a much more decentralized place.

What there is is a movement among businessmen and government leaders to have more local supply chains, as is the case with the electric car industry, for example.

American businessmen find it unwise to have their supply chain dependent on a country with which they have economic tension.

That was evident during the pandemic, when the US needed certain products and realized that it had to bring them from China.

There is also growing regulatory pressure for US companies not to include companies that engage in forced labor among their suppliers, as is the case in the Xinjiang region.

But there are still American companies that invest heavily in China, that have big business there, and they have no intention of changing that.

In general, the Chinese are trying harder to lessen their dependence on the US than the US is on China.

Is it possible to reverse that tendency towards a bipolar world?

At some point there will be a new leader in China. Xi Jinping will try to secure a third term, so there’s a good chance he’ll be in charge for a long time, but he can’t be there forever.

At some point there will be another government in China that may have another look at China’s role in the world and its relationship with the US.

Nothing is inevitable, in both countries there could be changes in which they move away from the competition, strengthen ties and improve their relations.

But I think if the trends we’re seeing now continue, it’s less likely that the world won’t split in two.