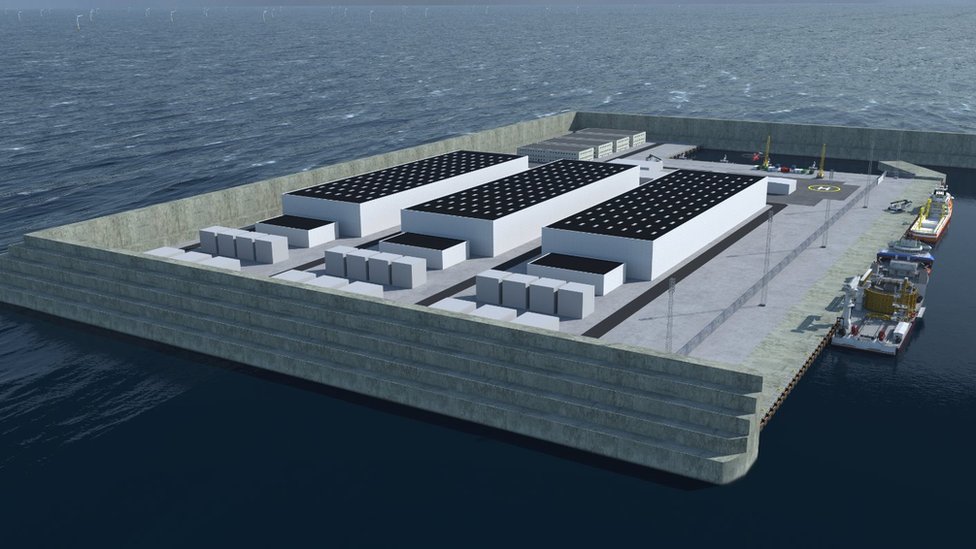 In the frigid waters of the North Sea, Denmark is looking for an alternative to keep warm in its harsh winters.

And, also, to end its dependence on Russian gas.

The government of the Scandinavian country announced last week that it seeks to accelerate the construction of an unprecedented energy project that had already been announced in 2020: the so-called “energy islands”.

It’s about some megaconstructions formed by sets of wind turbines that will be placed on a kind of artificial islands and that, according to the projects, will allow Denmark to generate much more energy than that produced by other wind farms in the world.

It is considered the largest construction project in Danish history, with an estimated cost of $34 billion dollars.

It was scheduled to be completed by 2030; but, following the start of Russia’s invasion of Ukraine, the Danish government announced that it will seek to speed up its completion as a European alternative to Russian oil and gas.

“Denmark and Europe must free themselves from Russian fossil fuels as quickly as possible,” Climate, Energy and Utilities Minister Dan Jørgensen said in a statement.

The official assured that the energy islands are a “green path” for stop financing Putin’s war with European moneygiven that, in his opinion, the North Sea has sufficient wind energy potential to cover the energy needs of millions of European homes.

“This huge offshore wind potential needs to be harnessed and therefore the Danish government is starting preparations to create additional power islands alongside those already planned,” he added.

According to official data, almost 49% of the total energy produced by Denmark comes from wind sources.

Meanwhile, the International Energy Agency estimates that about 16% of the country’s generation currently depends on Russia (in 2016 it was 34%).

Denmark has a long history of harnessing strong winds from the sea to produce electricity.

In fact, it was andhe first country in the world to build an offshore wind farm in 1991.

Under the Climate Law passed by Congress in 2019, Copenhagen committed to a 70% reduction in greenhouse gas emissions by 2030 and to be carbon neutral by 2050.

Last December, the government announced that it would end all new oil and gas exploration in the North Sea.

More than 400 natural islands are part of Denmark, including Greenland, but the country now wants to add artificial ones for energy purposes.

The construction of the first “energy islands” was announced in mid-2020.

So the Danish Energy Agency said they would be the first of its kind in the world and that they sought to exploit the “immense wind resources in the North and Baltic seas.”

“The islands (…) will serve as hubs that can create better connections between the power generated from offshore wind power and the power systems in the region around the two seas,” he said.

So it was calculated that offshore wind turbines around the islands will be able to supply green electricity to at least five million households.

“The power islands mark the beginning of a new era for electricity generation from offshore wind power,” the agency said.

According to the plan, the first part of the project involves the establishment of an artificial island in the North Sea that will serve as a hub for offshore wind farms supplying 3 GW of power, with a long-term expansion potential of 10 GW. .

The other, smaller one will be placed in the mbaltic seaon the island of Bornholm, and are expected to produce 2 GW of power.

To give you an idea, approximately 3.125 million photovoltaic panels are currently needed to produce 1 GW, and this is the amount of energy that 110 million LED light bulbs would consume, according to data from the US Department of Energy.

The two energy islands are based on the same concept, but they will not be identical.

The one in the Baltic Sea will be established on an existing island, which will mean that it will be located on land: they define it as an “island within the island”.

The one in the North Sea, however, will be built in a artificial island, which is originally planned to be the size of 18 football fields (120,000 m2), but is projected to be three times as large.

Since it will be considered “critical infrastructure” for the country, the government announced that it will control at least 50.1% of the islands, while the rest will go to private companies.

The project plans to supply electricity not only to the Danes, but also to the power grids of other neighboring countries.

Professor Jacob Ostergaard of the Technical University of Denmark told the BBC last year that countries such as Belgium, the UK, Germany and the Netherlands could also benefit.

Ostergaard notes that the idea of ​​energy islands is a “revolutionary” concept.

“It is the next big step for the Danish wind turbine industry. We led on land, then we made the move offshore and now we are making the move with energy islands, so it will keep Danish industry in a pioneering position,” he opines.

Currently, most countries that use wind sources do so through turbine parks isolated from each other, which supply energy directly to the electrical network.

According to the Danish Energy Agency, with the creation of the islands, wind turbines can be placed further from the coast and distribute the electricity they generate between several countries more efficiently.

The islands serve as hubs, or green power plants, that collect electricity from surrounding offshore wind farms and distribute it to the power grid.

“This allows electricity from an area with vast wind resources to be more easily directed to the areas that need it most, while ensuring that the power generated by the turbines is used as efficiently as possible in terms of electricity demand. ”, he adds.

The project, however, has also received several questions, mainly due to its high cost, the highest Denmark has ever paid for a building.

Local energy companies, such as Ørsted, have also questioned the effectiveness of building an artificial island, a method never before explored for these purposes.

Likewise, the considerable distance from the coast where they will be located has been criticized, which could hinder their operations, especially due to weather conditions and the impact it could have on the marine ecosystem.

The possibility that the country can complete the construction on time or that it can accelerate it, as the Ministry of Energy has now requested, has also been questioned due to the magnitude of the project.

It is not clear at the moment how or where the new islands announced last week by the Danish government will be located, but they said their aim is to contribute to the flow of energy to Europe.

Denmark hopes to discuss the potential expansion of energy islands with representatives of other European Union countries on May 18, when a ministerial meeting will take place in Esbjerg, in the south of the country, on energy possibilities in the North Sea.

“The EU must become independent from Russian fossil fuels as quickly as possible and the best way forward is for European countries work together to increase and accelerate the construction of renewable energy in the North Sea”, said the Danish Minister of Energy.

Last November, the European Union announced plans to increase the bloc’s offshore wind capacity 25-fold by 2050 and a five-fold increase by 2030.

Renewables provide around a third of the bloc’s current electricity needs.

According to EU data, offshore wind energy currently supplies some 12 gigawatts to countries in the area.