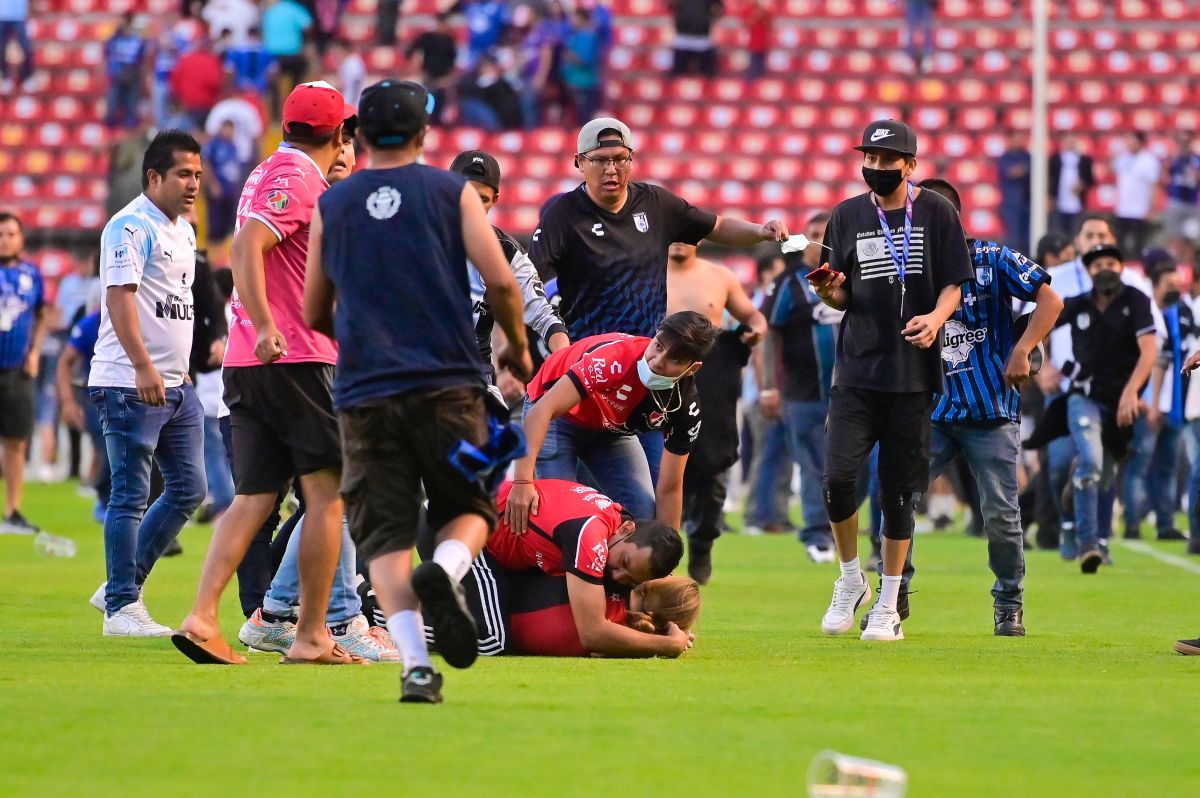 This Saturday there was a real tragedy at the Corregidor Stadiuma, during the match between Roosters of Queretaro and Atlas of Guadalajarawhere pseudo-football fans participated in multiple fights, which included beatings and weaponsthroughout the stadium, both on the field of play and in the stands and in the vicinity of the building, leaving the balance of 22 officially injured, although according to other reports there could be more and with worse diagnoses.

According to what could be seen on television cameras, as well as in the photos and videos that circulate on social networks, So it is like the events happened:

25th minute: Julio Furch scores the 0-1. The goal of the visiting team warms the spirits in the stands, due to the pique that both hobbies have had since 2007, when Atlas sent Querétaro down.

Minute 26 to 54: According to reports, the fans of both teams sang more aggressive chants than normal, with lyrics dedicated especially to the rival fans in this match. Some followers faced the opponents with signs and gestures, but without reaching physical violence.

55th minute: The meeting passed without further developments on the field and in the stands, until a group of people began to push each other, to run through the different areas of the stands and cross bars that separated them from the rival fans.

Minute 59: The fights begin in different areas of the grandstand. The security elements do not appear and many people start running to find a way out.

60th minute: The fights become more intense and while the match is taking place on the pitch, the cameras capture all the movement in the stands

minute 62: A corner kick is taken on the field and the first fan appears crossing the pitch. The match stops.

Minute 63: The massive entry of people to the court begins. Women, children and families enter first to protect themselves from violence in the stands, but behind them come the pseudo-fans who also sought to generate violence on the pitch.

Minute 64: The players look at the situation in astonishment, the game is suspended and all the players leave the field through the tunnels towards the dressing rooms, except Washington Aguerre, the Querétaro goalkeeper, who is the most affected and seeks to intervene to calm things down. He unfortunately was unsuccessful and was the last player out.

65th minute: Brawls begin again in different areas, now also within the field of play. In the stands the attacks continue.

Minutes later: There is no football anymore, only violence and tragedy. Videos begin to circulate of men lying naked and terribly beaten in the stands and outside the stadium. The aggressors use belts, chairs, sticks, stones and whatever they find as weapons.

A little laterthe governor of Querétaro, that of Jalisco and the executive president of the MX League, Mikel Arriola, agree that up to that moment there have been no deaths, only around 22 injured fans, two of them seriously; this despite the fact that completely different data was disseminated in other social network reports.

At least 22 injured left the riot of the Querétaro vs. Atlas

They suspend the Sunday day after the violent events in Querétaro