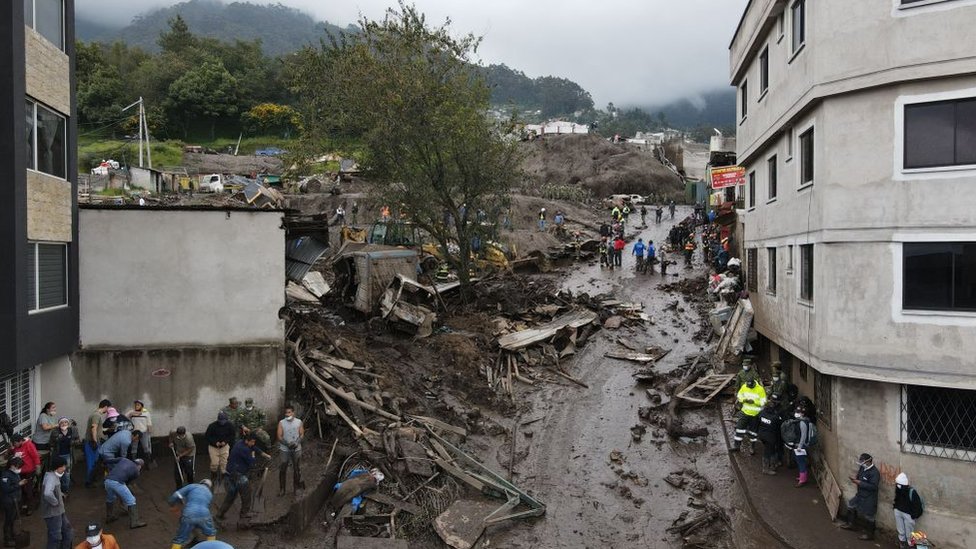 Two days have passed since a flood swept through the central-western neighborhoods of Quito.

The most recent figures speak of 24 people deceased, at least 52 injured and 12 missing, according to sources from the National Risk and Emergency Management Service of Ecuador consulted by BBC Mundo.

It is not ruled out that these numbers will increase as rescue groups and authorities clean up the area.

the mudslide affected some 348 people and damaged 38 homes, according to the mayor of Quito, Santiago Guarderas, in a statement to the media after a meeting with the Emergency Operations Committee of the Metropolitan District.

On January 31, a flood affected the sector of the gasca, on the northwestern side of the Ecuadorian capital. According to the authorities, it was caused by heavy rains that have been falling on the city and its surroundings.

Mud, debris, and even cars were washed away. In social networks, witnesses in the area and Ecuadorian media shared videos of the scene.

Please help spread the word. There is a flood in La Gasca. There are people screaming upstairs. All the power lines fell. We don’t know what’s going to happen,” says a woman in one of the videos released.

But what is a flood and what made this week’s one in Ecuador have this impact?

What is a barrage?

A flood is a flow of mud or other material where water washes loose material down a slope, ravine, or streamhighlights the website of the National Emergency Office of the Ministry of the Interior and Public Security of Chile.

It can happen either because the channel has permanent water or is dry, as Jorge Bustillos, a geological engineer and research professor at the Central University of Ecuador, explains to BBC Mundo.

But sometimes, such as when it rains heavily, the water and loose solid material “can exceed the capacity of the channel,” resulting in an overflow.

The alluvium does not necessarily have to flow through the riverbed, but rather encompasses and floods other areas without control, dragging what it finds in its path depending on the intensity; always flowing downhill by gravity.

There are natural factors to take into account to understand the alluvium in Quito.

The first is that the city is very close to the foothills of Pichincha. And the most impacted area is precisely in an area known as the slopes of Pichincha.

“Quito is a basin, a hole where there used to be an aquifer that served people as water,” says Bustillos.

But in recent days, Quito recorded heavier-than-normal rains. They fell to 75 liters per square meter, which represents the highest record since 2003.

Mayor Guarderas referred to this as an “extraordinary natural phenomenon.”

In an official statement, the Mayor’s Office of Quito said that the record of rains caused a reservoir to be produced in the El Tejado ravine, causing a slide of rocks and mud. The materials and debris exceeded the catchment structures.

One of the reservoirs built to capture rainwater in the mountains, with a capacity of 4,500 cubic meters, overflowed because an accumulation of 20,000 cubic meters is calculated, explained the mayor.

The general director of the National Risk Management Service, Cristian Torres, told BBC Mundo that the causes of the flood are yet to be determined and that mentioning them at this time without the required investigation would be jumping to conclusions.

However, Bustillos assures that there are general factors that must be taken into account to understand what happened. And one of them is urbanization.

The riverbeds and streams that Quito had, especially in the northwestern area, have been filled in to allow construction of buildings and works for population growth.

And that basin that Bustillos talks about is now urbanized and paved.

“Since it is urbanized, it is paved, cobbled, that water has nowhere to go and it goes to the sinkholes, where the sewers do not have enough capacity for that water and they overflow,” says Bustillos.

This paving has made the ground “waterproof”, says the specialist. So when it rains or the water overflows, the earth does not absorb it. As a consequence, the water flows, adding more and more liquid and solid material.

With more than 3 million inhabitants in its metropolitan area, Quito is the most populous city in Ecuador.

Deforestation is another important factor to take into account, adds Inty Grønneberg, doctor in Ecuadorian Innovation Ecosystems. In the area of ​​the slopes of Pichincha, endemic plants and trees have been replaced by eucalyptus, which does not allow the growth of native species, he indicates.

And it is that many years ago, the vegetation cover of the area was very different to which there is currently. But with human settlement, this cover has been replaced.

“If you look at the slopes of Pichincha, a lot of it is Eucalyptus,” says Grønneberg. “The growth of the city is expanding more and more upwards, towards the slopes. Settlements like neighborhoods, which have not been well planned.”

Deforestation has been uncontrolled in the western area of ​​Quito, say the sources consulted by BBC Mundo. And the slopes of the Pichincha volcano behind La Gasca have lost their protective forests.

“They are called protective forests for a reason,” says Bustillos, pointing out that the original vegetation provided protection against phenomena such as floods.

Given what happened, Mayor Guarderas said that a comprehensive plan should be prepared to protect the slopes of the mountain, which in the end will involve a process of reforestation in the area, according to the EFE news agency.

So what can the authorities and citizens do to prevent events like the floods from happening again or at least to minimize the impact?

It is difficult to think of a simple and definitive solution, considering that the houses are already built and the ground degraded and paved.

Bustillos stresses that it is important protect protective forests and better city planning.

But it also highlights that the city has mitigation, containment and contingency works for this type of event that have been very elaborate and planned “but have not received maintenance.”

For his part, Grønneberg stresses that it is vital to take urgent action in the short and medium term since a similar event could occur in the future.

“Climate change reports indicate that we will have more rains,” he points out. “We are concerned that these events are going to happen more, because we continue to destroy the protective forest.”

“If we do not have a clear and accurate control that it is not possible to build on the slopes, that advance (of the population) is going to take away our protection in a city that is going to receive more and more rain and therefore will have more landslides”.