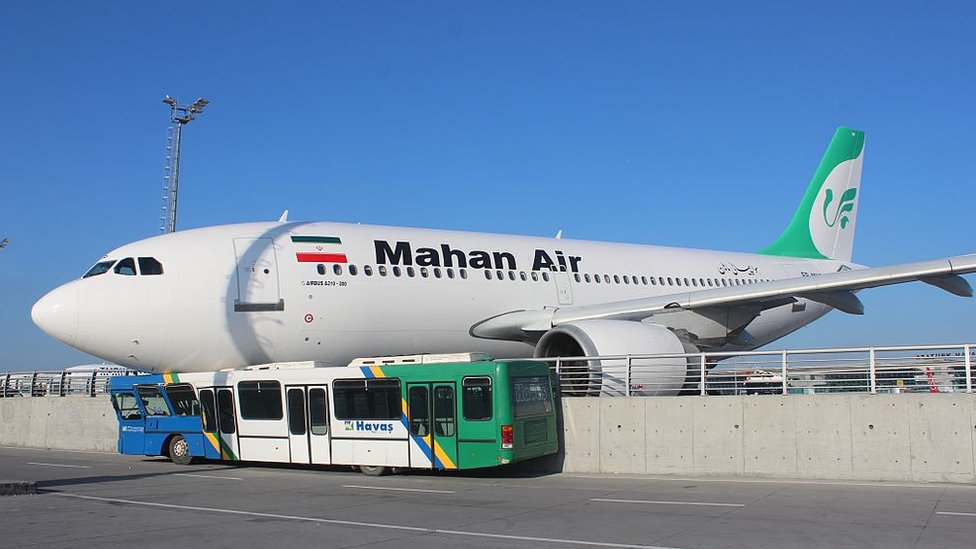 A Venezuelan-flagged plane that carried Venezuelan and Iranian crew members and that has remained motionless since last week at the Ezeiza international airport in Argentina is at the center of a mysterious controversy that has garnered international interest.

It is a Boeing 747 of the Venezuelan airline Emtrasur, which was detained by the Argentine authorities on June 8 after being stranded due to lack of fuel.

The plane had arrived in Buenos Aires on the 6th and was scheduled to go to Montevideo two days later, but Uruguay denied it access to its airspace, so it had to return to the Argentine airport, where it was detained.

The 14 Venezuelan crew members and five Iranians who were traveling on board were accommodated in a hotel in the Argentine capital, and the Iranians had their passports withheld, while the justice system investigates a series of alleged irregularities that have raised suspicion.

Here we tell you what is known so far.

Whose plane is it?

Caracas-based airline Emtrasur registered the plane as part of its fleet in January.

But before that, for 15 years, the Boeing 747 operated for the Iranian company Mahan Air.

“The ownership of the Boeing 747 held in Argentina has nothing to do with Mahan Airlines,” said Amir Hossein Zolanvari, a spokesman for that airline, in statements to the Iranian agency IRNA quoted by the BBC’s Persian service.

The official assured that ownership of the aircraft was transferred to the Venezuelan company and that it was not a lease as some non-Iranian sources have suggested.

Emtrasur is a subsidiary company of the state-owned Venezuelan Consortium of Aeronautical Industries and Air Services (Conviasa).

Both Conviasa and Mahan Air are sanctioned by the Office of Foreign Assets Control and Sanctions of the US Department of the Treasury. (OFAC).

The plane was built 36 years ago and is currently registered with the initials YV3531, corresponding to Venezuelan aircraft.

According to the specialized aeronautics site Planespotters.net, it was previously registered in the name of Mahan Air with the acronym EP-MND.

In September 2012, OFAC issued a statement informing about the inclusion of a Mahan Air aircraft with those acronyms in its list of assets subject to sanctions.

Why does it raise suspicions?

USA accuses Mahan Air of transporting military cargo on civilian planesand in 2011 imposed sanctions for those who operate with the Iranian airline.

In May 2020, the United States Department of the Treasury denounced the existence of Mahan Air charter flights to Venezuela that allegedly transported Iranian personnel, technical equipment and other materials that were used and paid for by the government of Venezuela. Nicholas Madurowhom Washington does not recognize as the legitimate president of Venezuela.

In addition to suspicions about the plane, Argentina is also investigating why there were five Iranians among the crew.

The Argentine press has indicated that the authorities of that country were struck by the fact that the aircraft’s crew was “more than double” what was required.

This Monday, the Argentine Security Minister, Aníbal Fernández, informed the radio station Perfil that the name of one of the Iranian crew members, Gholamreza Ghasemi, “coincides” with that of a member of the Islamic Revolutionary Guard of Iran.

Deputy Gerardo Milman, of the opposition coalition Together for Change, submitted a request for reports to the Lower House and then a complaint to the courts to investigate “the presumably anomalous behavior” that the flight carried out.

In statements to the newspaper La Nación, the legislator said that the aircraft “turned off the transponder, which is like a GPS on the plane, on its Córdoba-Buenos Aires flight.”

Also, He stated that the plane was coming from a stopover in Ciudad del Este, “where there were 29 passengers and 10 stayed in that city.”

According to Milman, among those passengers was one who had the same last name as Iran’s Interior Minister. [Ahmad Vahidi]who is accused before the Argentine justice system of being the “intellectual author of the attack on the AMIA”, which occurred on July 18, 1994, when a car crashed into the headquarters of the Asociación Mutual Israelita Argentina, causing 85 deaths and 300 wounded.

“These planes carry 4 or 5 people, they are cargo planes. With 30, as he had in Ciudad del Este, or 19, as he arrived in Buenos Aires, they are at a loss. There are no coincidences; there would be an operation of the Venezuelan intelligence and the Iranian intelligence in Argentine territory”, affirmed the legislator.

What was the plane carrying?

The detained aircraft is configured as a cargo plane and, apparently, inside it was transporting auto parts and other components for vehicles. Specifically: components for the production of instrument panels and seats for the Taos van, of the Volkswagen brand.

However, both SAS Automotriz SA, the company that acquired these auto parts, and Volkswagen Argentina issued statements disassociating themselves from the Emtrasur flight.

In the case of Volkswagen, it indicated that it acquires these parts directly from SAS Automotriz SA, while this auto parts company stated that it had ordered the shipment of these components from Querétaro (Mexico) to Forwarder Fracht USA, an international logistics services company.

“The relationship between Forwarder and the airline for the aforementioned pieces to arrive in Argentina is something that SAS Automotriz Argentina SA is unaware of and has no relationship at all,” the company said in a statement quoted by the Argentine press.

What happened to the passengers?

According to the information released so far, the detained aircraft was carrying 19 people: 14 Venezuelans and 5 Iranians.

The Argentine Security Minister, Aníbal Fernández, said on Monday that at the time of entering Argentina initially there were no red alerts or any type of similar measure against any of the crew.

He added that subsequently the Argentine government received information from international organizations that They warned about “the belonging of part of the crew to companies related to the Quds Forces“, a division of the Islamic Revolutionary Guards.

At first, the passports of all the crew members were withdrawn, although they would have been granted a permit to stay in Argentina and stay in a hotel.

Last Friday, the return of passports to Venezuelans was authorized, who are free to “get on a plane and leave without any inconvenience,” according to Minister Fernández.

In the case of the five Iranian passengers, the situation is different.

This Monday, federal judge Federico Villena ordered that the passports of the five Iranian crew members be kept in custody for an additional 72 hours. According to the local press, the magistrate had previously ordered the fingerprinting of these people.

The Iranians were identified in the warrant as Mohammad Khosraviarag, Gholamreza Ghasemi, Mahdi Mouseli, Saeid Vali Zadeh and Abdolbaset Mohammadi.

Hours after Judge Villena’s decision was made known, Federal prosecutor Cecilia Incardona requested to investigate these five Iranians for possible links to terrorism.

The official also asked to decree the secrecy of the case, a decision that was agreed by the judge shortly after.