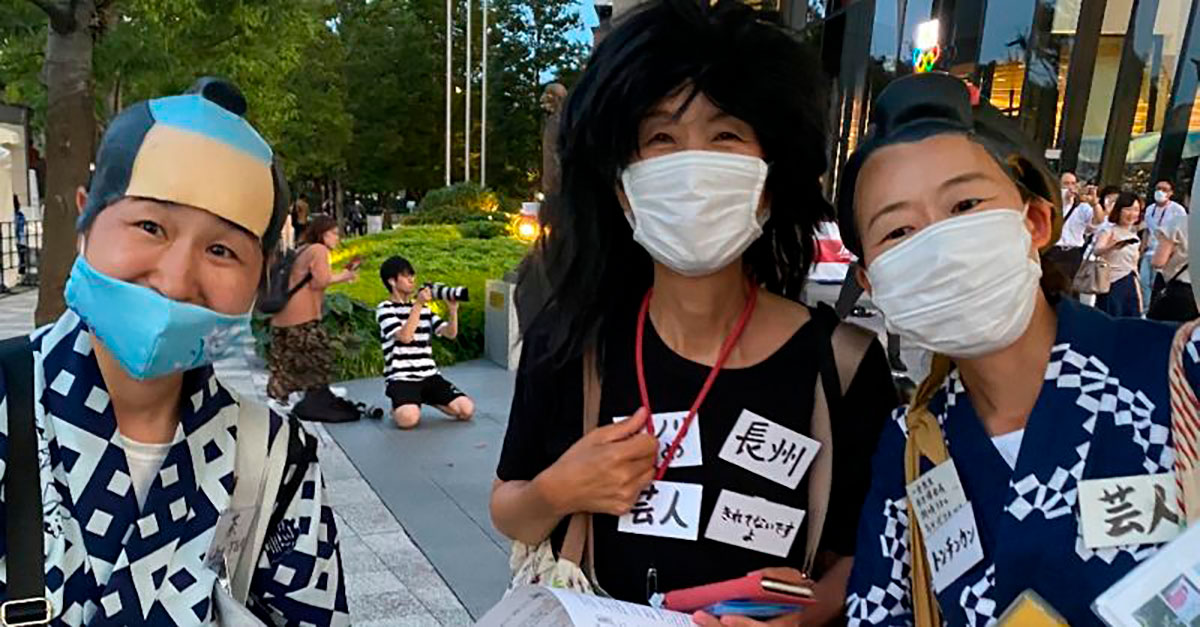 Next to some Olympic rings next to the Tokyo National Stadium, three women followed in our footsteps.

– “Omotenashi, omotenashi!”, Repeated the three women, apparently giving us a drink and some unintelligible documents.

While Marek Polaszewski, our cameraman, was a bit suspicious and tried to kindly explain to them that we were in a hurry to shoot, I couldn’t stop thinking about the word they repeated (“Omotenashi”) and in China, where I used to see many petitioners trying to give you similar papers with their complaints.

It was late and it was getting dark, but I decided to stop and talk with them and try to understand what exactly they were offering us.

They were maps of the city, with directions to the most iconic places and even food recommendations. Definitely: a sweet and welcoming way to welcome us.

Much more than hospitality

The word omotenashi is often translated as “Japanese hospitality,” but it goes way beyond that. In practice, it combines unparalleled courtesy and the desire to maintain harmony and avoid conflict, which is why for many defines a lifestyle, a whole culture.

“Omotenashi is an attitude based on altruism, using the maximum of our knowledge and resources to satisfy others,” explains Professor Wataru Uemoto of Kyoto Sangyo University, who has written extensively on this intrinsic part of Japanese society.

However, this Japanese version of hospitality entails a “more egalitarian relationship between the party that provides the service and the party that receives it.

In the omotenashi, the one providing the service or care enjoys doing it“, Says Professor Yoshinobu Sato, from Kwansei Gakuin University, who has also analyzed the issue especially from a business and economic point of view.

Sato explains that its origin comes from the rituals of the 16th century tea ceremony, where the host, as if it were a work of art, prepares every detail with great care anticipating the guest’s need, choosing the most appropriate bowls, flowers and decorations, expecting nothing in return, while the guests respond with almost reverential gratitude.

Even earlier origins have been traced, dating back to Manyoshu’s poetry recitals in the 5th or 6th century, the professor notes.

“This type of poetry banquets, organized by the emperor and other people of high society, had certain rules, such as the order to recite poems: the youngest had to start by reciting his poetry and the oldest afterwards. So that the celebration had a climax and everyone enjoyed it ”, he says.

The omotenashi culture is perceived from the moment you set foot in Japan.

Even the machines are designed to practice it: from the doors of the taxis opening automatically, anticipating your entrance, to the bathrooms, with the toilet seat heating before your arrival to improve the experience or music that begins to play when one goes to use it.

In contemporary Japan, that Japanese hospitality you learn from a very young ageor.

“Japanese society shares a saying ‘there is only one chance in life,’ which reminds us of the value of each of the encounters we have on our way,” explains Naoyuki Arai, president of a butler company for the upper class. Japanese and international and who has emerged as an expert in hospitality in the country.

“The Olympics are a great example of this: even though the guests are here on a temporary basis, the Japanese welcome them with omotenashi because they value each of their encounters with them ”, he tells BBC Mundo.

The term was quite unknown outside of Japan until the presentation in 2013 of Tokyo’s candidacy before the International Olympic Committee, in which the Japanese ambassador, Christel Takigawa, used it in her speech, as my colleague Ana María Roura showed in this video :

And in the Games that word is repeated over and over again, also to describe these Olympics, held in a city in a state of emergency and with great opposition or indifference from society.

“We were so prepared … It was going to be the Omotenashi Games,” a woman who came to the Olympic stadium to show her support for Olympism told us at the opening ceremony, shortly before other compatriots started a new protest against Tokyo 2020.

However, for some, the link between omotenashi and the Games since the candidacy itself has led to to abuse the term in Japanese society itself.

“When the word was used in the 80s and 90s of the last century, it was only used for cases of the imperial family and upper-class government officials. At that time, motenashi, without ‘o’, was used to refer to other types of ordinary and welcoming services ”, explains Professor Eumoto.

“But since 2013 and Takigawa’s speech, some started using the word omotenashi to refer to all kinds of common services, and to welcome foreign guests; but originally in principle it was only used for upper class people ”.

Despite huge praise for the system both inside and outside of Japan, this version of Japanese hospitality not perfect, all the interviewees agree.

“The world should learn from Japan about the beauty of collectivism. The Japanese prioritize the group over the individual (…) But Japan should also learn from the diversity of values ​​that the world offers ”, highlights the president of the butlers company, Naoyuki Arai.

“Omotenashi is a mindset to make people happy, but what makes people happy varies according to race, region, country… ”.

Without a doubt, and despite the enormous controversy, the Olympic Games are an opportunity for everyone.

“I hope the world knows that hosting the Olympics without an audience is the maximum expression of omotenashi of Japan, of personal sacrifice ”, concludes Arai. “And let Japan know how many people and how much effort all foreign participants of the Games are putting in to make them successful.”