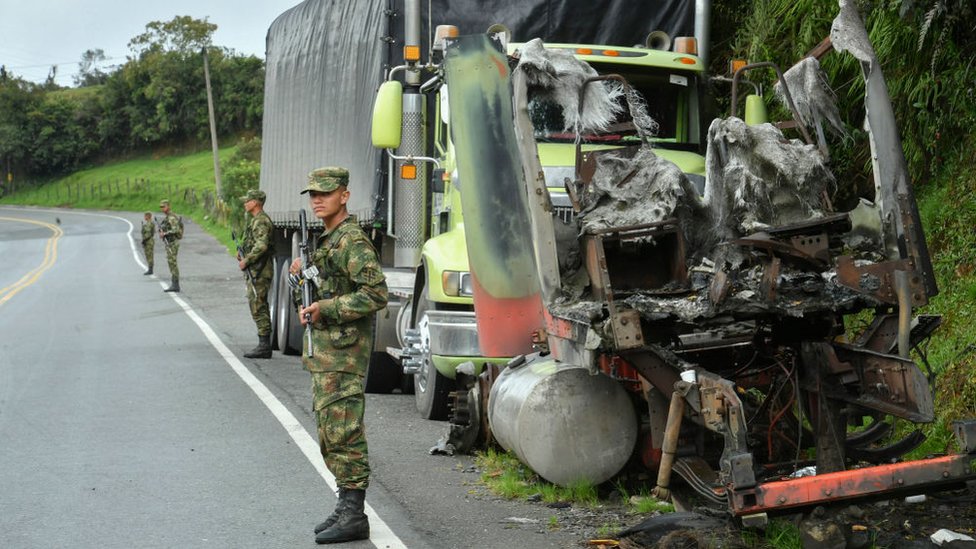 “This coup marks the end of the Clan del Golfo,” said the president of Colombia, Iván Duque, the day Dairo Antonio Úsuga, leader of that criminal organization, was arrested.

In the same speech, in October 2021, Duque announced that he was about to negotiate the extradition to the United States of the man who until then led the largest illegal organization in the country: alias Otoniel, a former guerrilla, paramilitary and drug trafficker who was a member of a powerful family — linked to illegality—in the northwestern part of the country.

After several demands against extradition and in favor of his version being heard in Colombia, Otoniel finally traveled to the United States last week under the supervision of Duque, who followed the transfer live by video call.

But as authorities celebrated “a triumph of justice over impunity,” members of the Clan, also known as Gaitanist Self-Defense Forces of Colombia (AGC), they were getting ready to paralyze half the country. This in the middle of the presidential campaign.

For four days, dozens of towns and highways in various regions of Colombia —especially in the north of the country— were anesthetized by the rigorous curfew of the armed group, which prevented commercial, social, and mobility activities. The reason: they were against the extradition of Úsuga.

On Monday, a supposed statement from the AGC announced the end of the armed strike, a usual protest mechanism of Colombian armed groups. Then another apparent communication from the group disproved it. Only the return of daily activities will confirm the end of the strike.

Duque, for his part, traveled to Urabá, the cradle of this neo-paramilitary group, to visit shops and announce new extraditions and a series of offensives against criminal leadersyes

“The Gulf Clan has received the hardest blows since that criminal structure was born,” he said. They made 300 arrests, raided goods and seized more than 60 tons of cocaine, he reported.

Hard blows, but which, judging by the strike, did not mark the end of the organization: at least 74 communities in 11 different regions were confined, almost 200 vehicles were burned and at least eight people were killed, some for not complying with orders of the criminal group and others in attacks on the public force.

The Urabá, a huge region prosperous for agriculture and cattle ranching, surrounds a gulf on the border with Panama in a corner of the Caribbean Sea. It also has access to the Pacific Ocean. It is a strategic point for any commercial activity; in Colombia it has been for decades for drug and arms trafficking.

The region was dominated in the 1990s by the guerrillas of the Popular Liberation Army (EPL) and the Revolutionary Armed Forces of Colombia (FARC). Then came the United Self-Defense Forces of Colombia (AUC), the paramilitary army that was fighting the insurgency.

The EPL and the AUC marked the origin of the AGC, since former members of both sides, in theory opposed and demobilized, joined together in what turned out to be a criminal rather than a political group.

“The Clan del Golfo is a sophisticated organization that has a stable structure, an anchor in legal businesses such as cattle ranching, and a broad portfolio of criminal activities that include extortion or the sale of coercive services,” says Víctor Barrera, a researcher at the Center Research and Popular Education (CINEP), in Bogotá.

In addition, “the AGC have a great capacity for mobility in the territory, because They operate through the subcontracting of specific services as the situation demands.“.

Experts warn that much is not known about this group. The multiplicity of associated armed forces throughout the country —some of them permanent and others contracted, some self-employed and others not— makes it impossible to know the extent of their power.

We salute the troops of the specialized search block in Carepa, who have a clear task, without any hesitation: these bandits do not intimidate a single family in Colombia. Let’s go for ‘Siopas’, ‘Chiquito Malo’ and the entire structure of the Clan del Golfo. pic.twitter.com/bJSVpGkmDF

There are estimates that speak of 3,000 members; others count up to 13,000, a number similar to that of the FARC, the largest guerrilla from the countryat its peak.

The AGC seem, then, to be a federal organization with a sufficient bureaucratic apparatus to obtain replacements for those who are arrested or discharged.

In fact, ever since Otoniel was arrested (he said he had turned himself in as part of a deal with the government), the names of his alleged successors began to appear in the local media.

One of them is Jesús Ávila, aka Little Bada former paramilitary who, according to official intelligence, manages the export of cocaine and is requested for extradition by the US.

Another is Wílmer Giraldo, alias Siopas, who was part of the guerrilla, demobilized and soon joined the AGC, where he rose quickly thanks to his subversive experience.

Otoniel’s arrest in October could have produced an internal battle for control of the AGC, but not: “The Clan has had an innovation that other successor organizations of paramilitarism did not have, and that is that they ensure the succession of leadership in a way that prevents the internal confrontations”, says Barrera.

The problem is root

Even before he was arrested, Otoniel’s power was questioned by security experts. The siege imposed by the army forced him to isolate himself.

The Ideas for Peace Foundation (FIP) described in a report as “hasty and far from reality” the idea that the capture of Otoniel constitutes the end of the AGC.

According to the conflict studies center, the AGC retain their power without Otoniel for four reasons: they continue to control a part of Urabá, they have not lost conflicts over territory or income with other armed groups, they have expanded into regions far from their territorial nucleus and They consolidated a structure that allows them to operate in a differentiated way, at the same time and in different areas.

For this reason, the FIP experts estimate that “the effects of Otoniel’s capture on the drug market could be slight and limitedbut the repercussions in terms of violence —massacres, displacements, confinements, recruitment of minors or sexual violence— can present important variations”.

Duque said that he will insist on a strategy that had an impact on the confrontation with the FARC during the government of Álvaro Uribe: take down the leaders.

But, according to Mauricio Romero, advisor to the Peace and Reconciliation Foundation and former advisor to the Truth Commission, persecution alone is not a solution: “You have to keep in mind that these organizations create jobs, offer income and maintain the economy of the regions where they operate.

“To put an end to them, we must generate regional economies linked to legal businesses“.

And Colombia, despite efforts to transform regional economies, remains the world’s largest exporter of cocaine.

*Andrea Díaz contributed to the investigation of this report.