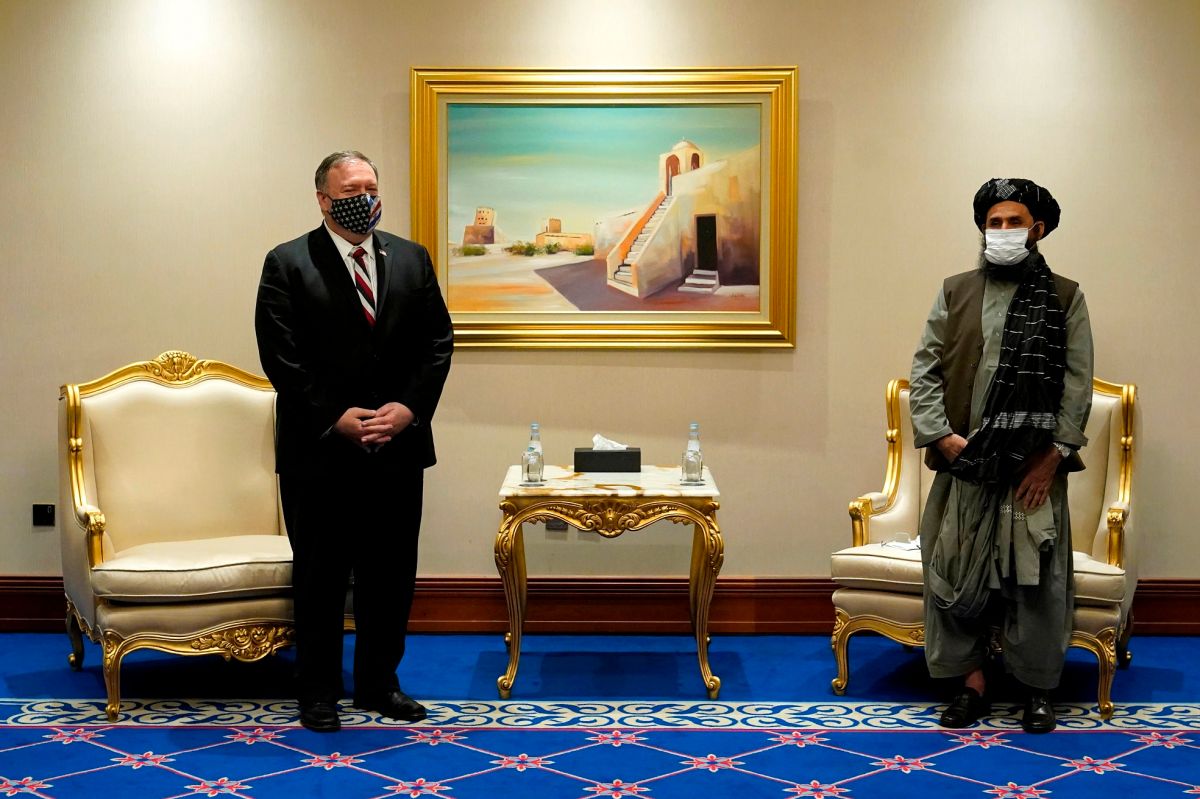 On February 29, 2020, when the COVID-19 pandemic began to force quarantines and border closures, the government of President Donald Trump signed an agreement with the Taliban in the city of Doha, Qatar. The United States had, since then, few options to avoid backing down.

The exit route of the US Army from Afghanistan begins the agreement whose progress was closely followed by the Secretary of State, Mike pompeo, who together with the former president Trump now accuses President Joe Biden of causing chaos his treaty started, experts say.

“The United States Commits to Withdrawing All United States Military Forces, Allies, and Coalition Partners from Afghanistan”says the First Part of the agreement. “(This includes) all non-diplomatic civilian personnel, private security contractors, trainers, consultants, and support services personnel within fourteen (14) months of the announcement of this agreement.”

The 14 months established in the agreement ended in April of this year, that is, by May, the US troops had to begin their withdrawal.

That first part of the agreement establishes that the US and the Coalition must withdraw their personnel from “five military bases” whose first time limit occurred 9.5 months after the agreement was signed by the Trump Administration, which began negotiations for the exit.

“The United States is committed to immediately begin working with all relevant parties on a plan to promptly releasing political and combat prisoners as a confidence-building action with the coordination and approval of all relevant parties“, Indicates the agreement.

The dialogue is said to have included the release in three months of up to 5,000 prisoners from the Islamic Emirate of Afghanistan, better known as the Taliban. By March 2020, the first 1,000 people would be released.

The document also indicates that the released prisoners “will commit to the responsibilities mentioned in this agreement so that they do not represent a threat to the security of the United States and its allies.”

The Trump Administration also included that the Taliban pledged to ensure that no terrorist group, including Al Qaeda, would use Afghanistan as a headquarters to take action against the United States.

It emphasizes that the document constantly repeats that the “Emirate State of Afghanistan … is not recognized by the United States as a state and is known as the Taliban.”

Support from the Trump Administration included its commitment to dialogue with members of the United Nations Security Council on behalf of the Taliban.

“Signed in Doha, Qatar, on February 29, 2020, corresponding to Rajab 5, 1441 on the Hijri lunar calendar and Hoot 10, 1398 on the Hijri solar calendar,” the agreement says in English, although it is noted that it was written also in Pashto and Dari.

In October, the Taliban even expressed their support for Trump to win presidential re-election.

Former President Trump Now Blames President Biden for RetirementBut experts warned of the consequences for the US having signed the Doha Agreement, in addition to the “risk” for the new administration.

“The most obvious thing about this agreement is that the Afghan government was left out,” Middle East journalist Dexter Filkins told NPR. “The Biden Administration inherited all of this, right? So they inherited the war, and then they inherited this withdrawal date of May 1… (This is a) set of really impossible options, it was just there, left for them, waiting for them when they got to the White House. “

Trump has demanded the resignation of Biden due to retirement, but true to his political personality he does not assume any responsibility for the agreement. His former officials follow the same line, starting with former secretary Mike Pompeo, who still in November 2020 had meetings with the Taliban to follow up on the agreement.

President Biden recalled in his speech Monday that the Trump Administration left the agreement with the “deadline”.

“When I took office I inherited an agreement that President Trump negotiated with the Taliban. According to their agreement, US forces would be out of Afghanistan on May 1, 2021 “said the Democrat. “US forces had already been reduced during the Trump Administration from approximately 15,500 US forces to 2,500 troops in the country, and the Taliban were at their strongest militarily since 2001.”

Biden acknowledged that he may have been unaware of the agreement, but that would have meant facing a new war against the Taliban.

“The decision I had to make, as your President, was either to comply with that agreement or to be prepared to fight the Taliban again in the middle of the spring fighting season,” he said.