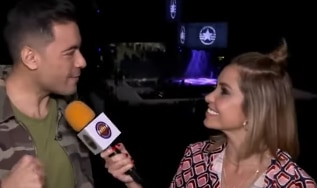 “In the most difficult moment of my life when I lost Magda, the first thing I wanted to do that Sunday, went to have a tequila and put the ‘Remember me'”, the presenter of the morning told Rivera in an interview.

Likewise, Escalona mentioned that it was a very significant moment for her and remarked that one of the most important values ​​of melodies is being able to connect with the people who are listening to them.

And you sang to me too in loss that time, and I think that’s the purpose of music that fills your soul, touches your feelings, when you can fall in love or touch a memory “, he shared.

Before these words, Carlos Rivera was not silent and thanked for what Andrea was sharing with him. In addition, he added that he had a great appreciation not only for the driver, but also for his mother.

Also you do not know how much I love you, that I have Magda and that for me to be able to have these songs that I know accompany to people in very difficult and very hard times, it is satisfying

The Tlaxcala native stressed that part of being a singer is bringing meaningful lyrics to the public and took the opportunity to make a moving promise to the Televisa presenter.

“Through music while we remember people and carry them in our hearts, now that we are here I promise that I will remember you a lot and Magda ”, he pointed out, moved.

What happened to Andrea Escalona’s mother

In an interview with the journalist Mara Patricia Castañeda, Escalona confessed at the beginning of 2021 the difficult moments she went through after the unexpected death of her mother.

one day before his death, Magda Rodríguez spoke with her daughter to share that she had felt unwell throughout that week and asked her not to meet, as she suspected she was ill with coronavirus.

“Magda talks to me and says (…) ‘Don’t come’, ‘but why, Mom?’ (I say), ‘No, because how about I have covid ‘, and I said’ mom, if you have covid, I have covid‘”Andrea recalled, who assured that her mother forbade her to go take care of her.

Thus, due to a strange feeling, the next day Escalona decided to communicate with the woman who cared for her mother and when she went to see Magda she realized that she was no longer alive.

“My girl is walking to see her and, I swear to you, my script in my head is: ‘if something happens to my mother, I’ll die’ (…) and cut A, my girl this way ‘Miss, don’t breathe’ “Andrea recalled.

The host delved into the health problems faced by the producer and ruled out any chronic disease: “Magda I was overweight, but sick? I feel sick I was not. We never did the Covid test, I don’t know if he had it or not. An ulcer has burstI didn’t even know I had an ulcer, “he mentioned at the time.

Andrea Escalona recalled her courtship with the controversial Daniel Bisogno: “What he does in his bedroom is very up to him”