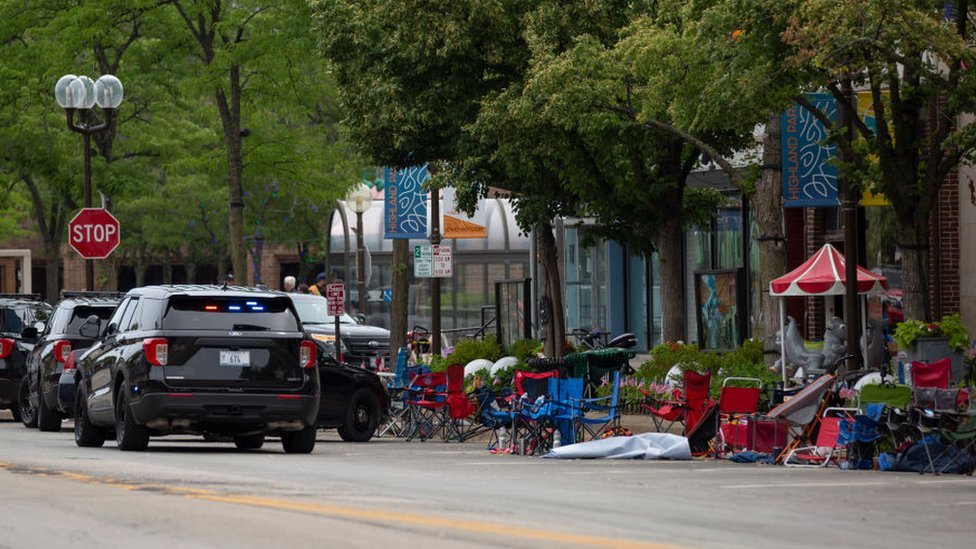 Nicolás Toledo was not very convinced about going to see the Monday morning Independence Day parade in Highland Park.

The 78-year-old Mexican needed a walker to walk and knew it would be difficult for him to navigate the crowded sidewalks in that city north of Chicago.

His family, however, I didn’t want to leave him home alone. They were all going to attend and it was a good opportunity to spend a day together. There were 15 of the family and they chose a good place to see the parade in the center of Highland Park.

The allegorical cars began to pass, says Xochil Toledo, one of his granddaughters who accompanied him. Suddenly chaos broke out: Robert Crimo, a 22-year-old American, started shooting into the crowd with a high-powered rifle.

Nicolás Toledo died at the scene.

“A day that was supposed to be full of joy and happiness turned into a dream full of terror and pain,” says Toledo’s granddaughter in a message on her Facebook profile.

Crimo was accused of seven counts of premeditated murder on Tuesday, before the death of an eighth victim was known on Wednesday.

Xochil Toledo explains that her grandfather was sitting in the middle of the family when the parade started.

As a car with a gang passed by on Central Avenue in Highland Park, his grandfather looked happy, “enjoying the moment.”

They heard gunshots, which at first they thought were part of the show. But then the bullets began to fall right where the family was.

“He saved all of our lives. they could have gone [las balas] against me, against my boyfriend or against my cousins,” Xochil Toledo told the newspaper Chicago SunTimes.

One of Toledo’s sons tried to protect him and was shot in the arm, but everyone else was able to get to safety after the attack.

The family says that Toledo is “a Guardian angel” who protected them.

They opened a fundraiser that in just over 24 hours received the response of more than 1,200 people and more than $60,000 in help.

“There are no words to say how much we thank the community for all their help in these difficult times for our family. All donations will go towards funeral expenses,” they wrote.

Nicolás Toledo was visiting his family north of Chicago, after two years of not being able to travel to the US due to pandemic restrictions.

It was originally from the state of Morelosin central Mexico, but for many years he worked in the United States, where a good part of his family lives, made up of his wife and eight children.

He had dual Mexican-American citizenship, so he spent long periods with his family in Illinois.

“We brought him here so he could have a better life,” his granddaughter told the newspaper. New York Times. “His children wanted to take care of him and be more in his life and then this tragedy happened.”

Another of the fatalities was the Mexican Eduardo Uvaldo, from 69 tousaccording to the Mexican Consulate in Chicago.

His family said the Waukegan man was watching the parade in Highland Park every year when he was shot in the head.

He was hospitalized but died on Wednesday. “We had faith and hope that he could survive,” his daughter Susy Uvaldo told the Telemundo network.

His wife – with whom he had four children and a marriage of more than 50 years – also had head injuries from bullet fragments, but was released.

They also died in the attack. Irina McCarty35 years old, and Kevin McCarthy37, a couple who had a 2-year-old baby, Aiden, who was found alone and covered in blood at the site of the attack.

According to the newspaper New York Times, the boy was rescued by a pageant attendee, Lauren Silva. I was covered of blood under a dying man.

As Silva’s boyfriend desperately tried to apply first aid, the woman hugged the boy who kept asking about his parents.

He was unharmed and is being cared for by his grandparents.

Remember this little boy found wandering alone after #HighlandPark for the? We’ve just found out why… both his parents of him were killed💔

Another fatality is Jackie Sundheimwho worked at a local synagogue, the North Shore Congregation Israel.

“There are not enough words to express our deep sorrow at Jacki’s death and our condolences to her family and loved ones,” the synagogue said in a statement.

The synagogue reported that Mrs. Sundheim leaves behind a husband and a daughter.

And the relatives of another shooting victim, Stephen Strauss88, described him as an “honorable man” who had worked all his life.

Straus was a financial advisor and father of two who took the train every day to his office at a Chicago stockbroker.

In a statement, his son called him a man “curious about the world” and “a product of Chicago,” while his niece Cynthia told local media he had “an insatiable thirst for life.”

Katherine Goldstein64, has been identified as another of the victims.

Her husband, Dr. Craig Goldstein, told The New York Times that she was a mother of two daughters in their twenties. She said that she had gone with her oldest daughter, Cassie, to the parade in Highland Park so she could meet some friends who were students.

She added that she had dedicated her life to being a mother, after quitting work in the 1990s.