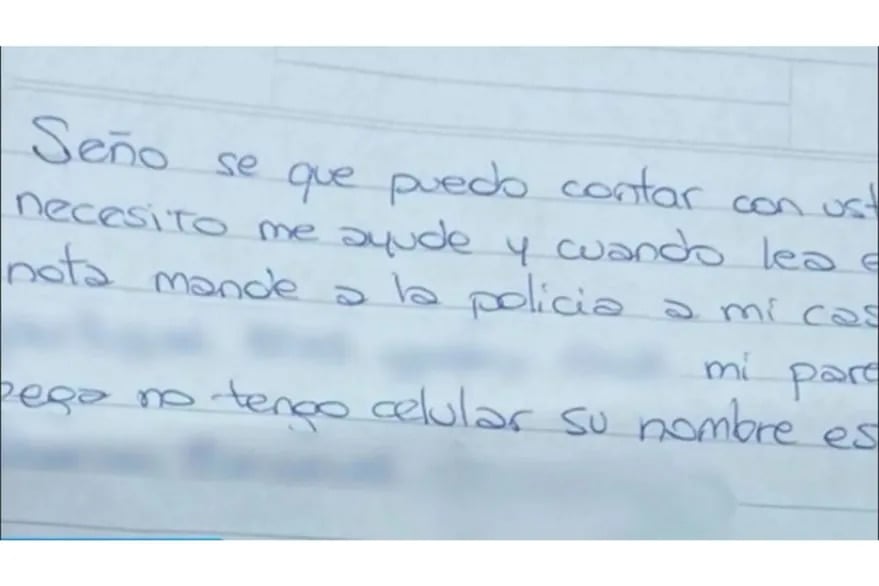 “Señor, I know I can count on you, I need your help and when you read this note please send the police to my house, my partner beats me and I don’t have a cell phone”, It was the request for help a woman wrote in her son’s notebook and that resulted in the arrest of the aggressor, accused of gender violence.

The incident occurred in the town of Godoy Cruz, in Argentina, and was revealed this week. The woman’s son, when attending school, showed the note to his teacher and then the teacher went to the director of the establishment, who called 911 to assist the child’s mother, according to Los Andes media.

After the complaint, the police went to the family home and arrested the man, He was transferred to a judicial dependency.

For her part, the mother of the minor explained that her partner had been physically abusing her for 4 months and kept her locked in the bathroom without being able to communicate with anyone by phone.

“When the protocol is applied we can save lives. The teacher gets the news and sees a violation of rights and did not hesitate. The teacher knew what she had to do, it is a duty to know, and treat it in all schools, ”said María Juana Canillas, regional inspector of the General Directorate of Schools (DGE) to Cadena 3.

For her part, the director of Gender and Diversity of Mendoza, Belén Bobba, according to the Télam agency, explained: “There are times when we look for strategies to ask for help and there are sectors of the State, such as health or education, that have it in the territory, and many times it is the arrival to be able to open up to situations, for example, of gender violence and communicate certain situations that are happening”.

* Bolivia: Man disguises himself as a woman and sprays his ex-partner with a liquid; causes burns to the face and body
* Stabbed his roommate: death by domestic violence in New York
* Man beheads ex-girlfriend with machete in Pennsylvania apartment; policemen see part of the macabre scene through the window