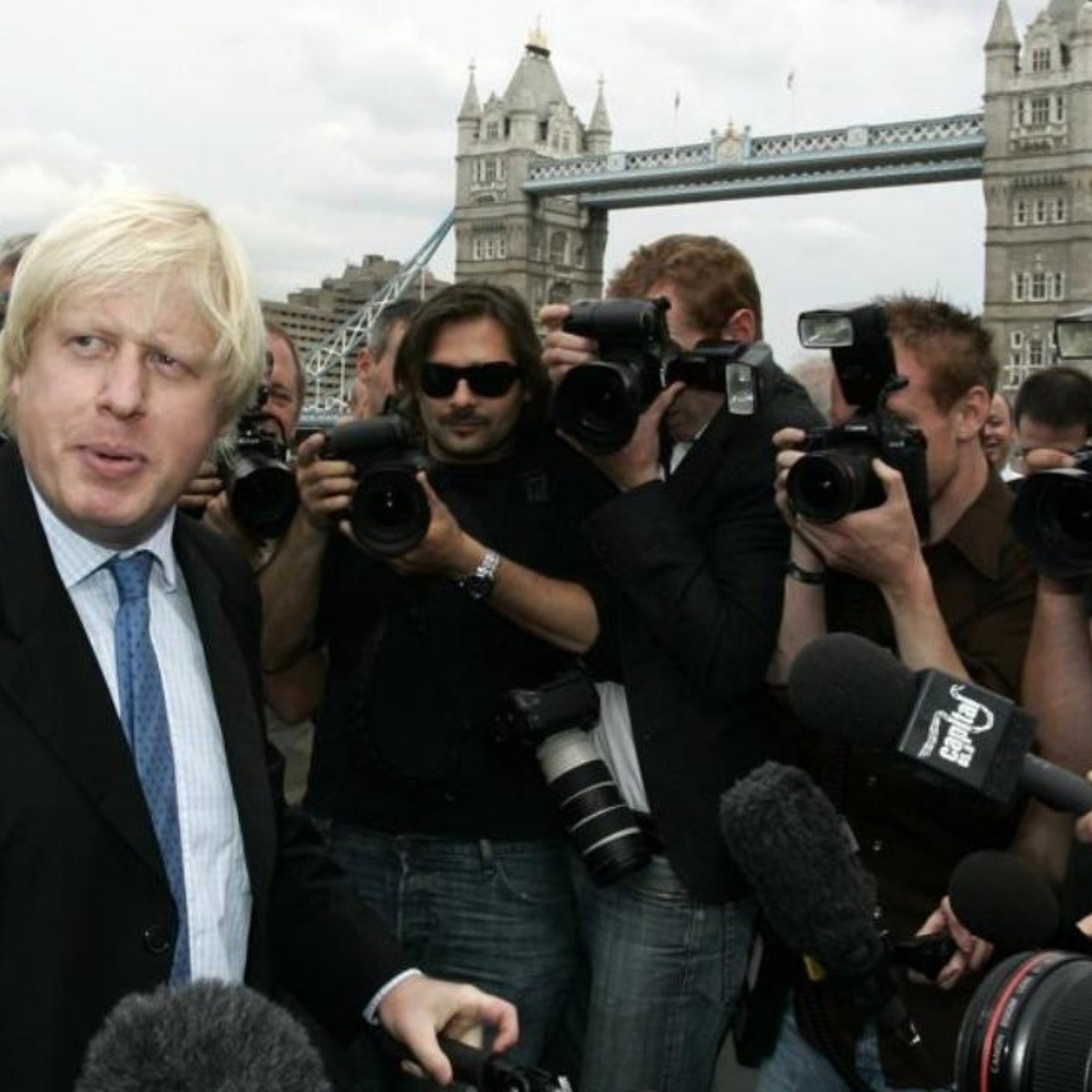 LONDON – Boris Johnson, Britain’s prime minister, shocked the world by announcing his resignation on Thursday, after the chorus of disapproval within his own party became too much for him.

Johnson, was born in the Upper East Side neighborhood of Manhattan, New York, of British parents, his father Stanley Johnson and his mother is Charlotte Johnson Wahl, with dual nationality. In 2015 he renounced his US citizenship.

Boris Johnson wanted to be like his hero Winston Churchill: a great character who led Britain in times of crisis. He was brought down by crises of his own making, when a trickle of ethical claims became a flood that engulfed his government and turned his own party against him.

He studied Classics at the University of Oxford and began his career as a journalist at The Times, where he was fired for making up a quote15 and then worked at the Express & Star in the city of Wolverhampton.

The move came after months of scandal in which Johnson was fined by police and criticized over an investigator’s report for allowing rule-breaking parties at his office while Britain was on lockdown during the coronavirus pandemic.

Johnson urged his party and his country to “move on” and focus on the UK’s struggling economy and Russia’s war in Ukraine. But two resounding special election defeats for Johnson’s Conservative Party and allegations of sexual misconduct against a top party official sealed the fate of a politician whose ability to survive scandal was legendary.

Johnson’s career was always one of extremes. He took Britain out of the European Union and led the nation through a global health crisis that put his own life in danger, but he was ousted after flouting the restrictions he imposed in response to COVID-19.

Party revelations at Johnson’s Downing Street office while the country was in lockdown in 2020 and 2021 caused outrage and tested the patience of the Conservative Party for its erratic but election-winning leader.

An investigation by official Sue Gray criticized “failures of leadership and judgement” in the Johnson government for allowing multiple rule-breaking gatherings in 2020 and 2021. Dozens of people received police tickets, including the prime minister, his wife Carrie Johnson and the Treasury Department. chief Rishi Sunak.

It was apparently the final blow to the career of one of the most divisive politicians Britain has ever known. A sympathetic biographer, Andrew Gimson, called Johnson “the man who takes on the establishment and wins.”

But for former MP Rory Stewart, who unsuccessfully ran against Johnson for the Conservative leadership in 2019, he was “probably the best liar we’ve ever had as prime minister”.

Johnson’s selection as Conservative leader and prime minister in July 2019 capped a rollercoaster ride to the top. He held important posts, including Mayor of London and UK Foreign Secretary, but also spent periods on the fringes of politics after self-inflicted mistakes.

Many times, Pfeffel Johnson’s Alexander Boris was dismissed as a lightweight who lacked the seriousness necessary in a leader. He sometimes colluded with that impression, fostering the image of a scruffy, Latin-speaking populist with a shock of blond hair who didn’t take himself too seriously. He once said that he had as much chance of becoming prime minister as finding Elvis on Mars.

First elected to Parliament in 2001, he moved for years between journalism and politics, becoming well known as a newspaper columnist and a guest on television comedy game shows.

He sometimes made offensive comments, calling Papua New Guineans cannibals and comparing Muslim women wearing face-covering veils to “letter boxes”, which caused a furor and which he shrugged off as a joke.

His first major political post, as Mayor of London from 2008 to 2016, suited his talents. He developed a high global profile as a cheerful ambassador for the city, an image exemplified when he got stuck on a zip line during the 2012 London Olympics, waving Union Jacks as he dangled in the air.

Critics criticized his endorsement of vanity projects, including a little-used cable car and a never-built “garden bridge” over the River Thames, warning that he could not be trusted. When he was a young journalist, The Times of London had fired Johnson for fabricating a quote. He was once recorded promising to give a friend the address of a journalist the friend wanted to hit. He was sacked from a high Conservative post for lying about an extramarital affair.

As the Brussels correspondent for the Daily Telegraph, he specialized in exaggerated stories of EU profligacy and ludicrous bureaucracy, stories that helped turn British opinion against the bloc, with far-reaching consequences.

Historian Max Hastings, Johnson’s former boss at the Telegraph, later called him “a man of remarkable gifts, flawed by lack of conscience, principle, or scruple.”

It was Brexit that gave Johnson his big break. Johnson’s co-leadership in the campaign to take Britain out of the European Union helped the “exit” side secure a narrow victory in a 2016 referendum.

His bullish energy was essential to the victory. Also, critics said, were the lies of the campaign, such as the false claim that Britain was sending 350 million pounds a week to the EU, money that could instead be spent on the UK’s national health service.

The Brexit vote was a triumph for Johnson, but it did not immediately make him prime minister. Theresa May won a Conservative Party leadership contest and took the top job.

Johnson had to watch and wait for three years as May struggled to secure a divorce deal acceptable to both the bloc and the British Parliament. When it failed, Johnson’s promise to “get Brexit done” earned him the job of prime minister.

In December 2019 he secured the Conservative Party its largest parliamentary majority since Margaret Thatcher in the 1980s.

His first few months in office were tense. Lawmakers resisted his Brexit plans and suspended Parliament, until the UK Supreme Court ruled the move illegal. Opponents said it was another example of Johnson’s flouting of the rules and disregard for the law.

After several exit date delays, Johnson achieved his goal of taking Britain out of the EU on January 31, 2020. However, despite Johnson’s slogan, Brexit was far from “done”, with many issues remain to be resolved, including the sensitive status of Northern Ireland, a continuing source of friction between Britain and the bloc.

And then the pandemic came. Johnson initially seemed relaxed about the threat the novel coronavirus posed to the UK and was hesitant to impose restrictions on movement and business activity.

He changed course and imposed a lockdown at the end of March 2020, and days later he himself fell ill with COVID-19 and spent several nights in intensive care at a London hospital. He later said that he had been “touch and go” if they would put a fan on him.

Johnson’s handling of the pandemic drew decidedly mixed reviews. By nature a laissez-faire politician, he bristled at having to impose restrictions, and from the start he spoke rashly that the pandemic would be over in a few weeks.

The UK went on to have one of the highest coronavirus death rates in Europe and some of the longest lockdowns. But the government got one big thing right, investing early in developing and purchasing vaccines and delivering doses to most of the population.

The success of the vaccination gave Johnson a boost in the polls, but his problems were mounting. He faced accusations over money from a conservative donor that he had used to renovate his official apartment.

And it suffered a major backlash when the government tried to change parliamentary rules after a lawmaker was found guilty of illicit lobbying.

The last straw came when details emerged of parties held at Johnson’s office and home in Downing Street while the country was in lockdown.

Sometimes the details were comical: staff smuggling alcohol into Downing Street in a suitcase, a supporter’s claim that Johnson had been “ambushed with a cake” at a surprise birthday party.

But the anger they provoked was real. Millions of Britons had followed the rules, unable to visit friends and family or even say goodbye to dying relatives in hospitals.

Hannah Bunting, a professor at the University of Exeter who has studied public trust in politicians, said that in the past, voters were “well aware of Johnson’s failings and this did not diminish his electoral popularity”.

The party’s claims changed that, because people could “compare their actions to his,” he said. “Most of us complied with government restrictions because we thought it was in everyone’s interest. We made sacrifices to ensure people were safe.”

The Russian invasion of Ukraine on February 24 gave British politicians and the media more pressing things to focus on. It brought a respite from internal troubles for Johnson, who won international praise for his military, financial and moral support for Ukraine. He twice traveled to Kyiv to meet President Voldymyr Zelenskyy, a trusted and welcome ally.

But defeats in the June 2022 special election, one in a district that had voted Conservative for a century, prompted Conservatives to realize that anger at the “party” had not gone away.

Shortly after, Johnson was caught changing his story about how he handled allegations of sexual misconduct by a senior member of his government. Ministers who had defended Johnson through thick and thin finally had enough.

They resigned from the government en masse, leaving Johnson with no choice but to resign. Johnson’s streak of miraculous escapes had finally come to an end.