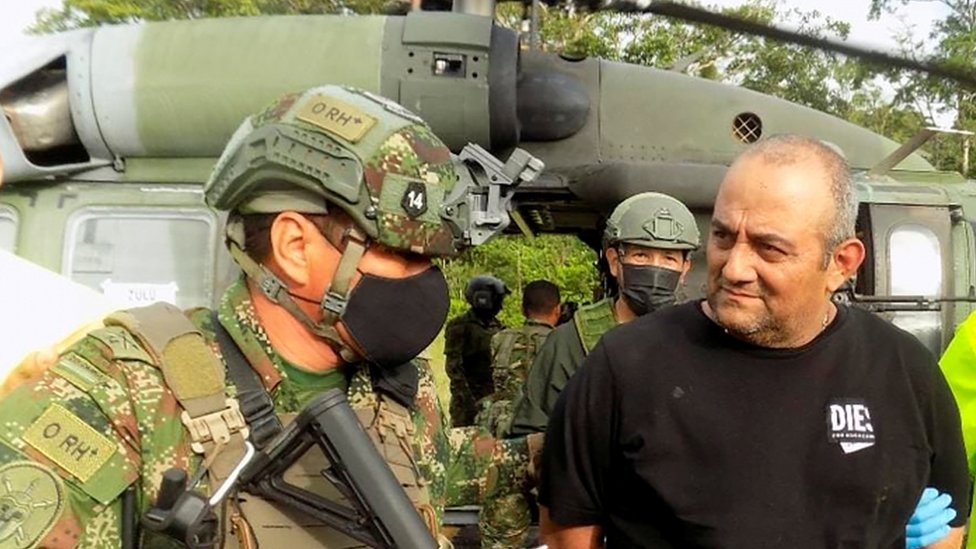 The head of Dairo Antonio Úsuga David, alias Otoniel, had two prices: the United States government offered US $ 5 million for information leading to his capture and the Colombian, about US $ 800,000.

Despite this, the operation to put Colombia’s most wanted drug lord behind bars, head of the powerful Gulf Clan, just ended this Saturday, after almost a decade of intense search.

Otoniel, 50, was detained in the municipality of Necoclí, in northwestern Colombia, in a joint operation in which more than 300 soldiers participated of the Army, the Air Force and the National Police displaced in more than twenty helicopters.

“It is the hardest blow that has been dealt to drug trafficking in this century in our country. This blow is only comparable to the fall of Pablo Escobar in the 90s, ″ said the president of Colombia, Iván Duque, celebrating the news.

Despite the fact that Escobar, the legendary head of the Medellín cartel, is by far the most famous drug lord in the world, Duque’s comparison does not seem exaggerated, at least from the point of view of the effort made by the Colombian government to capture them.

In 2015, the Colombian authorities began an operation to capture Otoniel in which some 1,200 troops belonging to the best prepared elite groups in the country participated, more than double the 500 who at the time were tracking Escobar.

“Alias Otoniel was the most feared drug trafficker in the world, murderer of policemen, soldiers, social leaders, recruiter of minors ”, said Duque.

As for the Clan del Golfo, Colombian Defense Minister Diego Molano said this Saturday that it had become “the greatest threat” in recent years because “the greater number of tons of coca that Colombia shipped to markets of the US and Europe was managed and articulated ”by this criminal organization.

According to the Colombian press, against Otoniel there is a red circular issued by Interpol for multiple homicide, multiple kidnapping and conspiracy to commit a crime, among other crimes. In addition, it is the subject of more than 120 judicial processes opened for all types of crimes.

A history of violence

Otoniel’s life can be seen as an accumulation of geological layers from the history of violence in Colombia in recent decades.

He was born in Antioquia at the beginning of the 70s and at the age of 16 he joined the ranks of the defunct Popular Liberation Army (EPL) guerrilla movement with his brother.

Later with his brother Juan de Dios Úsuga David, alias “Giovanni”, joined the FARC and later, in what looks like a 180 degree turn, to the paramilitaries of the United Self-Defense Forces of Colombia.

In 2005 that group demobilized (laid down its arms), but the brothers joined the ranks of the drug lord Daniel Rendón Herrera, alias “Don Mario”.

When he was captured in 2009, Otoniel and Giovanni were left in charge of the organization.

Otoniel became the ultimate leader when his brother was killed by the Policía Nnational during an assault on a year-end “narco-party” on January 1, 2012.

From family to poster

Considered a large cartel, the Clan del Golfo was initially known as the Urabeños, after the Urabá region where it operates, although its tentacles extend to much of the country and beyond (members of the group have been captured in Brazil, Argentina, Peru, Spain and Honduras).

At its core has been a family clan, the Úsuga, to which not only Otoniel and Giovanni have belonged but also several cousins ​​and other close relatives.

For example, Francisco José Morelo Peñata, alias “El Negro Sarley” (killed in a police operation in April 2013), had a romantic relationship with one of Otoniel’s sisters, according to the police, and was the second in the organization after Giovanni’s death.

The person in charge of the group’s finances was Otoniel’s partner., Blanca Senobia Madrid Benjumea, alias “La Flaca”, who was captured in 2015.

And who was pointed out by the police as the contact with the Mexican cartels and the person in charge of managing the coordination of drug trafficking to Central America was a nephew of Otoniel and stepson of El Negro Sarley, Harlison Úsuga, alias “Pedro Arias”, also arrested. in 2015.

Last August, the Colombian government authorized the extradition to the United States of Alexander Montoya Úsuga alias ‘El Flaco’, a cousin of Otoniel who had been captured in 2012 in Honduras.

The United States Department of Justice has described the Gulf Clan as “one of the most important transnational organized crime organizationsThat threaten that country.

On the other hand, since the times when they were known as the Urabeños, the Clan del Golfo has distributed pamphlets calling themselves as Autodefensas Gaitanistas de Colombia, which is considered by the Colombian press as a ruse to hide their true aims. .

The strong family ties, as well as his firm implantation in an area of ​​Colombia that they know well, are some of the reasons why it had been so difficult for the authorities to capture Otoniel.

In part that has to do with his family’s close relationship with Urabá.

They are native to the region, which the clan members know well.

They know how to handle their land and have power over their population.

After Giovanni’s death, the clan decreed an armed strike that left the region stagnant for a couple of days.

But Otoniel also had various tricks to evade his pursuers.

Among them was the use of trained creole dogs to alert you when a stranger is approaching, with enough time to escape.

The policemen took him away, gave him the name Oto and trained him and used him in the 2015 operation to help them search for his former master, whose scent is unmistakable.

In addition, according to the Colombian press, Otoniel did not use technological devices such as cell phones to avoid being tracked, so he communicated with the members of his organization by sending voice messages that were distributed on recorders and USB sticks by human emails.

The fear of being captured also led him to constantly change the place where he spent his nights, usually in the jungle and, frequently, in wooden huts.

Those rural homes were in stark contrast to the big-screen televisions, expensive drinks and fancy perfumes that authorities often found when they followed in his footsteps.

Another distinctive feature of their lairs were expensive special mattresses, which helped ease the discomfort of a herniated disc.

Now that he has been detained, it is not clear whether he will be able to persuade the authorities to allow him to sleep on such a mattress in prison.