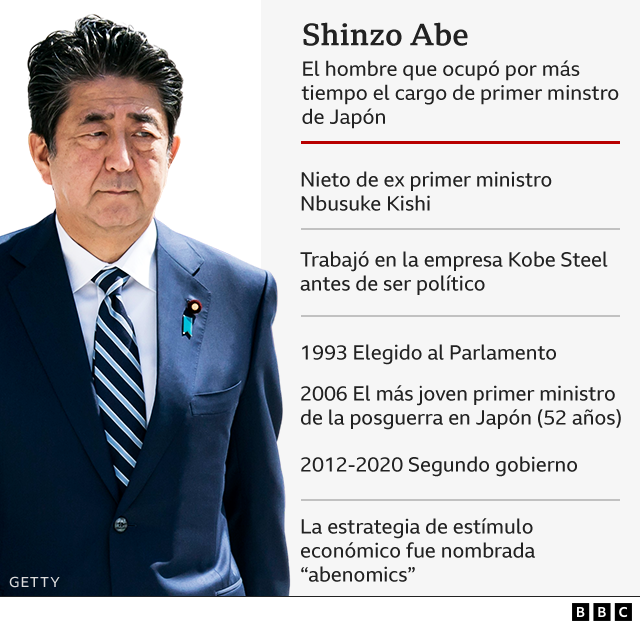 Shinzo Abe was Japan’s longest-serving prime minister and was known for being a “hawk” on hard-line foreign policy and his distinctive economic strategy known as “Abenomics.”

This Friday he was assassinated while continuing to dedicate himself to politics, after being shot several times while giving a speech in the middle of the street.

His two periods of government were characterized by policies tending to revitalize the ailing economy japanesea hard-line stance on domestic and foreign policy issues, and for unifying government support to counter China’s growing power.

He was tasked with overseeing Japan’s recovery from the devastating Tohuku earthquake and tsunami in 2011, which killed nearly 20,000 people and caused the collapse of the Fukushima nuclear reactors.

His economic policy branded “Abenomics“ -a distinctive strategy based on quantitative expansion, fiscal stimulus and structural reforms- was recognized as an important factor in the recovery of the economy before the ravages of the covid pandemic.

In 2020, he stepped down as prime minister for health reasons, after weeks of speculation, when it was revealed that he had suffered a relapse of ulcerative colitis. That intestinal illness had forced him to resign during his first term as prime minister in 2007.

He was succeeded by Yoshihide Suga, a close ally of his party, but continued to be a powerful figure in Japanese politics after his resignation.

Abe was first elected to Parliament in 1993, and joined Prime Minister Junichiro Koizumi’s cabinet, when in 2005 he was appointed as sChief Cabinet Secretary.

His rise seemed to have reached its climax in 2006 when he became Japan’s youngest postwar prime minister.

However, a series of scandals – including the loss of pension records by the government, which affected the rights of some 50 million – hit his government.

As a consequence, his Liberal Democratic Party LDP sustained a strong defeat in the Upper House during the July 2007 elections, and in September of the same year he resigned, accusing ulcerative colitis.

In 2012, Abe returned to the post of prime minister, declaring that he had been able to overcome the disease thanks to drug treatment.

He was then re-elected in 2014 and 2017, to become the longest-serving prime minister.

Although Abe’s popularity fluctuated, remained virtually unopposed as prime minister due to his influence in the LDP, which changed its rules to allow him to serve a third term as party leader.

Abe, who was 67 at the time of the attack, was known for his hard-line stance on defense and foreign affairs issues, and for dedicating himself to seeking to amend Japan’s pacifist post-war constitution. Conservatives see the Constitution – which was drafted by the United States – as a reminder of the humiliating defeat of Japanese troops in World War II.

His nationalist views frequently increased tension with China and South Korea, particularly after his 2013 visit to the yasukuni shrinein Tokyo, a controversial monument linked to Japan’s militarism before and during World War II.

Repeated visits to the shrine also rankled leftist factions in Japan, who saw them as Abe’s attempt to cover up Japanese wartime atrocities.

In 2015, he advocated for the collective right to self-defense, which would allow Japan to deploy troops abroad to defend itself and its allies when under attack.

Despite opposition from neighboring countries and even the Japanese public, Parliament approved the controversial change.

The broader goal of amending the Constitution to formally recognize Japan’s military could not be metand that issue continues to cause divisions in the country.

It also failed to secure the return of what Japan calls the Northern Territories – a chain of disputed islands off the coast of northern Hokkaido prefecture that are claimed by Japan and Russia.

The Abe’s good relations with former US President Donald Trump they succeeded in protecting Japan from damaging trade tariffs, and from having to put up more money to support the presence of US troops in the country.

Coping with the economy and the pandemic

The late former prime minister will be remembered for his so-called “abenomics,” his emblematic economic policy based on quantitative expansion, fiscal stimulus, and structural reforms.

Those measures generated growth during their first period, but subsequent slowdowns raised questions about the effectiveness of abenomics.

His efforts to revitalize the economy also faced challenges when, in the spring of 2020, Japan entered a recession for the first time since 2015.

Abe’s popularity suffered another blow around his handling of the covid-19 pandemic.

There were also concerns that campaigns aimed at promoting tourism within the country contributed to the resurgence of the infection.

Critics point out that other promises of his economic policy — such as empowering women in the workforce, cracking down on nepotism and changing unhealthy work cultures — have also gone unfulfilled.

However, it is recognized that was able to keep the Trans-Pacific Economic Cooperation Agreement in forceparticularly after the US withdrew from that trade deal.

When Abe announced that he was resigning on August 28, 2020, there was an internal fight between the factions of the LDP, because he refused to name a successor.

He was eventually succeeded by Yoshihide Suga, a veteran politician who was a longtime member of his cabinet. but abe continued to dominate Japan’s domestic politicseven after Suga was replaced by current Prime Minister Fumio Kishida.

The attacker, a former Japanese marine who was neutralized and arrested at the scene, said he was dissatisfied with Abe’s policies.

Abe immediately fell to the ground and was seen bloodied. Still conscious, he was taken to a nearby hospital, but he was pronounced dead shortly after.

The killing has shocked a country unaccustomed to gun violence and with one of the lowest crime rates in the world.