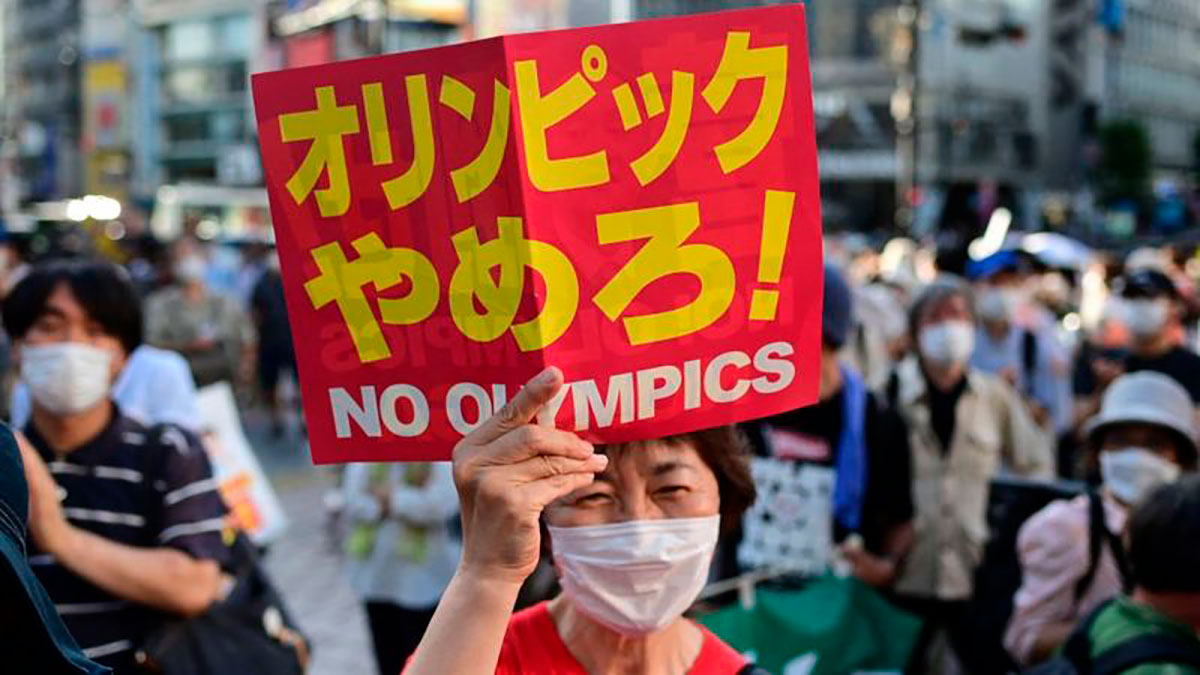 Empty stadiums, hotels and restaurants without foreign tourists and businesses with few customers.

The disappointment of those who had invested heavily in anticipation of a business boom triggered by the Olympics has been brutal.

It is that the event in Tokyo, which was postponed last year due to the covid-19 pandemic, is taking place without an audience and in a city in state of emergency because of the health crisis.

Despite persistent protests against the holding of the Games, as two-thirds of the Japanese population oppose them for fear that they will become a “super-spreading” event of the pandemic, the competitions continue.

Not without controversy. One of the great sponsors of the event, the automotive Toyota, announced a few days ago that it will not use commercial notices connected with the Tokyo Olympics due to the concern that exists in the country in relation to the pandemic.

And some business leaders in Japan such as Takeshi Niinami, CEO of the Suntory company, declared that the Olympic Games are losing their commercial value and that his firm decided not to be part of the sponsors because they considered them “too expensive”.

Something that experts from the financial world such as Takahide Kiuchi, an economist at the Nomura Research Institute, had already warned, who wrote in a report that “much of the expected economic benefit of the Tokyo Games disappeared in March, when it was decided to ban foreign spectators travel to Japan ”.

“It would have been better not to have them”said Suehiro Toru of investment bank Daiwa Securities, despite the costs of suspending them.

The business outlook is bleak, though not just because of the havoc the pandemic has caused.

For years, several economists have published research to show that the Olympics are a “bad business” for the city – and the country – that hosts them.

The arguments that are repeated the most are that, instead of consumption, tourism and prestige, the event leaves a millionaire debt and infrastructure works that end up becoming completely useless “white elephants”.

“The losses will be enormous”Robert Baade, professor of Economics at Lake Forest University in the United States and former president of the International Association of Sports Economists, tells BBC Mundo.

Although it is difficult to put into figures the true magnitude of the economic losses for Japan, because the calculations operate on the basis of estimated values ​​in relation to what the “gains” generated by the event would have been in other circumstances, the economist says that, anyway, it is possible to make a projection.

From their perspective, the losses can be about US $ 15,000 million.

What is known for sure is that about $ 800 million from ticket sales have disappeared. But the matter becomes more complex when it is necessary to estimate how much the tourism sector and all the businesses associated with it have lost, as well as other sectors that relied on an economic revival thanks to the Games.

What the government says

The event has become a challenge for the nation of the rising sun, which “when it won this opportunity, I hoped that it would serve to demonstrate its rebirth after the triple crisis of 2011 and its return to the world front line, with an eye on Beijing, which will host the following, the winter ones in 2022 ”, explains Tamara Gil, special envoy from BBC Mundo to Tokyo.

In the midst of the maelstrom, the government of Japan has come out to try to calm the waters.

Prime Minister Yoshihide Suga has said that he is confident that measures to keep audiences away from the event will prevent an escalation of the pandemic and that the country will still benefit from a huge global television audience.

“I decided that the Olympics can go ahead without compromising the safety of the Japanese people,” Suga said in an interview.

“The simplest and easiest thing is to stop them,” he added. But “The government’s job is to address the challenges”.

Suga is not in a comfortable position, considering that his approval rating has dropped and that he will face elections towards the end of this year.

On the other hand, the bid to become the host country of the event was made almost a decade ago by his predecessor, Shinzo Abe, a political ally of Suga, who inherited this great challenge.

The problem is that there is less and less interest on the part of governments to host the event, precisely because the benefits it generates have been questioned.

The only ones interested in answering the last call to organize the Games after Tokyo were Beijing and Almaty, Kazakhstan. The bet was won by China.

How expensive have these Olympics been?

As is often the case with the Olympics, the planned budget for the event ended up escalating beyond initial forecasts.

Subsequently, the National Audit Board of Japan reported that the final cost is approaching the US $ 22,000 million.

And then the local media Nikkei Y Asahai they did their own research putting the figure at $ 28 billion.

In the end, whatever calculation is considered more accurate, there is no doubt that the initial projections were widely exceeded, something that has been a constant in recent years.

“History shows that the Olympic Games end up generating losses for the countries that become hosts,” explains Baade. “What is happening in Japan came long before the pandemic.”

The Japanese sponsoring firms that contributed about $ 3.3 billion are concerned about the way this saga has evolved.

And losses, experts say, could mount if the Games ultimately turn out to be the “super-spreading event” some fear.

“That would be a disaster in addition to current losses,” says Baade. “Let’s keep our fingers crossed that that doesn’t happen.”

Who loses the most?

According to Victor Matheson, professor of economics at the University of the Holy Cross in Massachusetts, the United States, the – unofficial – cost of the Olympic Games could have reached US $ 25,000 million, even before the additional expenses that the containment has caused. of the pandemic.

As a counterpart, millionaire income from tickets, sponsors or tourism for Japan has fallen dramatically, Matheson tells BBC Mundo.

But those who have not suffered a great financial impact, he argues, are the organizers of the International Olympic Committee (IOC).

“The income of the IOC remain intact as long as the games continue to be televised, ”he says.

“There is still an important opportunity”

Several of the more than 60 companies that invested in the event have expressed concern about the profitability of their funds.

“This is not an ideal situation,” acknowledged Michael Payne, former head of marketing for the International Olympic Committee in an interview.

However, his forecast still maintains a certain level of hope.

Companies could still be “pleasantly surprised by the potential profit that will be made the legacy of these games so difficult”.

“There is still a significant opportunity,” he added.

Andrew Zimbalist, who has published three books on the economics of the Olympic Games, has criticized the benefits the event leaves in the cities that host it.

And in the case of Tokyo, he argues that the government has spent about US $ 35,000 million, the highest figure ever put on the table.

His position is that the gigantic investments in infrastructure that are made to host the event – such as construction of stadiums, Olympic villages or renovation of existing facilities – tend to end up benefiting construction companies, more than the local economy.

In an interview with the newspaper The New York Times, Zimbalist proposed that if we lived in a rational world, “we would have the same host city of the Games every two years ”. There is no reason to rebuild works every four years, he noted. “It doesn’t make sense for cities.”

“When the modern Olympic Games were created in 1896, we did not have international telecommunications or international travel by airplanes. So for the world to participate and enjoy the Olympics, it had to move. We no longer have to do that ”, proposed the researcher.

A proposal that so far does not seem to have gained followers, at least in public debate, but that after the Tokyo Games and with the effects that the covid-19 pandemic has caused in the world, perhaps it could begin to be debated.