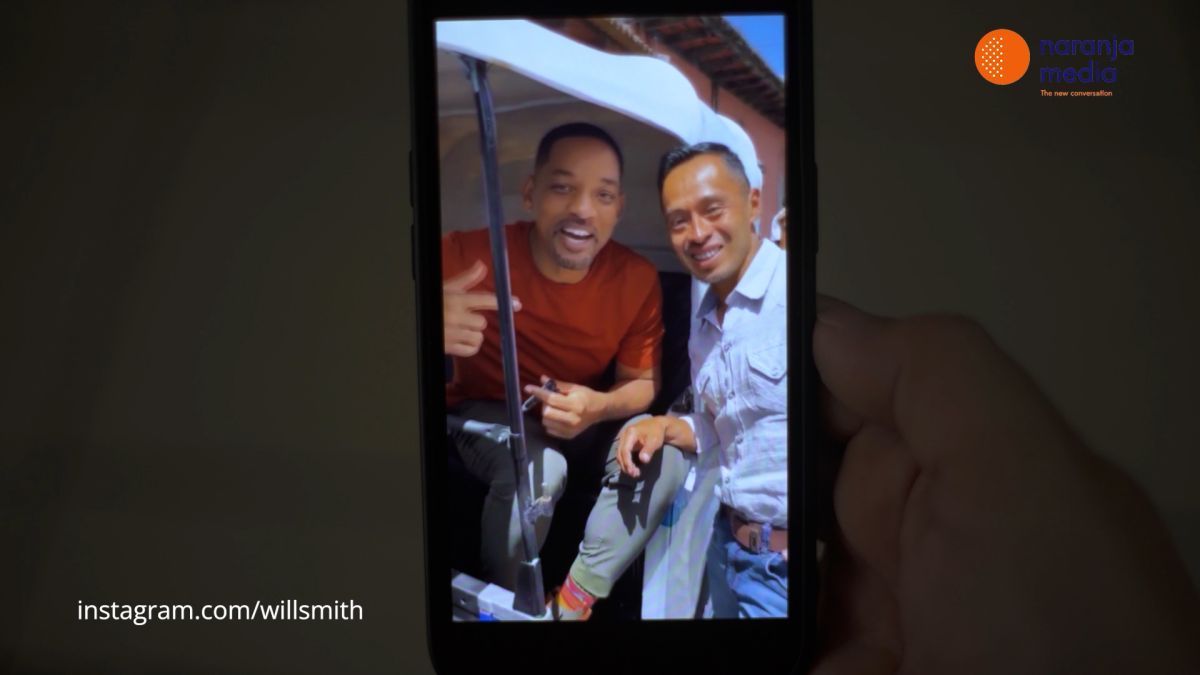 It all started with a mysterious phone call. René Hugo Castillo drives a tuc tuc -a small vehicle made in India used to transport tourists- through the streets of Antigua in Guatemala and is used to all kinds of customers. But that call caught the intention. They were looking for a driver to record a documentary in the monumental Guatemalan city with a star
of the show worldwide.

And that call changed his life.

“Ten minutes before starting the service they tell me that the person was Will Smith. I got very
nervous but of course I couldn’t show my emotions.”

They were several days of filming and René established a good relationship with the Hollywood star: “He as a person is something incredible, a very good person, humble, simple, a lot of laughter. He inspires you and gives you confidence…”, assures René.

It happened very shortly before the Oscar ceremony in which Will Smith scandalized the world with his famous slap and in fact in the account of Instagram of the actor one of the last videos that appear
It is the one of his adventure with René through the streets of Antigua. A video that, by the way, already exceeds 70 million views and that has made René a celebrity among his neighbors from Antigua..

“The next day I had many messages, calls from friends who told me “you are famous”, you were with Will Smith. It went viral worldwide. In the street I felt strange and people greeted me.

Since then, René recognizes that his situation has improved, but his entrepreneurship did not start with his meeting with Smith. It is a story of improvement that began 16 years ago when he bought his tuc tuc thanks to a loan.

The tuctuquero is the common thread of the documentary “Antigua en el tuc tuc de Will Smith”, produced by Naranja Media, which tells stories of entrepreneurs from this city that has just been designated by National Geographic as the most beautiful city in Central America. It was also recently chosen as the best tourist destination in Central and South America, according to the World’s Best Awards 2021 survey of the travel magazine Travel Leisure.

In the documentary the tuc tuc takes us through the cobbled streets of the colonial city, which was the capital of Guatemala between 1554 and 1776, to learn about success stories related to tourism.

All of them have suffered the difficulties caused by the pandemic in 2020 and 2021 in a city that depends on the arrival of tourists. In 2019, the year before Covid, Antigua exceeded 690,000 visitors, in 2021 it fell to 120,000. The data for 2022 are encouraging. Despite the difficulties, all these entrepreneurs have come out ahead. The restaurants with home delivery, those that taught courses thanks to the online modality… They have used their imagination and have had the support of the employees to resume the rise of Antigua as a tourist jewel in Guatemala.

In fact, Antigua Guatemala, located in the department of Sacatepéquez, is the place that has attracted the most travelers in the country in recent years.

There are 198 hotels, pensions and lodgings, which means 2867 rooms available. It has 329 restaurants in the most varied styles of cuisine.

These are the numbers but as verified in the documentary, After the slowdown caused by the pandemic in 2020, Antigua is going back up again thanks to the effort and special character of its enterprising and friendly neighbors. It can be seen in the testimonies that far from seeking help and subsidies from the Government, Antiguans are generating opportunities and wealth for their
country.