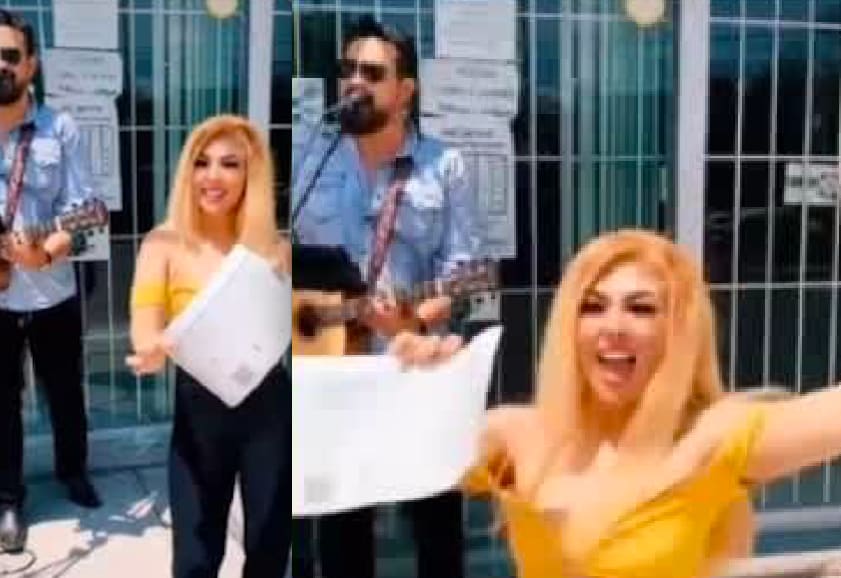 Woman celebrates divorce. One of the saddest moments in a marriage is when things do not work out as a couple, and despite several attempts to make that relationship work, things are not the same. For this reason they resort to separation by going to a Civil Registry to formalize the divorce.

This was not the case for Jacqueline, a 31-year-old, who has gone viral on social networks after publishing a video in which he appears dancing while showing the divorce certificate that he had just obtained inside the Civil Registry of Torreón, Coahuila, Mexico.

The woman has caused a stir, since in the recording she is one of the happiest that her ex-husband has now separated. With live music and dancing, this is how the young woman who has gone viral decided to celebrate the divorce, leaving everyone surprised by the way she takes things.

The events occurred on the afternoon of last Friday when the young woman named Jacqueline, who went to the Civil Registry to end a 13-year marriage. Apparently the woman was not very happy with her ex-partner because of the way she celebrated being single again, according to Milenio.

The young woman, who was married for 13 years, released the video where she can be seen dancing to the rhythm of a song by the group “Elefante”, which was performed by a local musician. The joy overflowed his face showing his happiness for having made a good decision.

According to some media, Jacqueline has a little daughter, and she dedicated a few words to women not to endure violence of any kind, or blows, or situations that put their lives at risk, and even recommended that they divorce and not have afraid to start over.

At the end of her divorce process, the woman took the opportunity to give advice to all couples who suffer from domestic violence: “Do not endure violence of any kind and do not bear blows at the first time flee from that environment, since parents always say that marriage is forever, “said the now single.

She even mentioned that many identify with her, when thinking about the fear of being alone and of not being able to continue without a partner: “Many times, many women can identify with me, we are afraid to start alone, imagine that I am not going to power, ”he added.

Woman celebrates divorce: “Would you marry with that same superficiality?”

“Chale, not even on their last day of marriage was the argument taken away from that girl … how good that friend will be a happy man”, “Congratulations to the ex-husband … it hurts that I no longer charge for those last dances outside of a deposit or repair … which your ex does very well ”,“ I can almost guess the reason for the divorce ”.

“Well, congratulations to the ex-husband, look what to do in this theater, I don’t want to imagine all the things he did to him”, “To see his photos and his celebration, how good it is for his ex-husband that he got divorced”, “With that same superficiality he would marry … does not know true love “,” Always the one who makes the least noise, is the sane and the one who should have come out winning “, were some comments on the networks. TO SEE THE VIDEO CLICK HERE .

Another similar case was in which a man ended his marriage, saying goodbye in the best way after signing the divorce certificate, listening to his favorite band with a song that ‘described’ that moment perfectly. Through the local media, the unique story of Felix and his divorce was released.

The man is seen outside the Civil Registry holding in his hands the paper that endorsed the end of the marriage, as well as a friend by his side, who was celebrating with him while the music group played the song and they said they were celebrating divorce. Filed Under: Felix Divorce Two Carnales.

The man shared a series of photos and videos on his Facebook profile, where he is happy while signing the paper that would legally separate him from whoever his partner was; in the sequence of images, he is happy and celebrating the end of the relationship with his friends.

In the first video that he uploaded, with a duration of eight minutes, the office of the legal office in Acuña, Coahuila is shown, where in the foreground the man is focused, who is talking to the woman who is being in charge of managing the signature of the divorce record, while a musical group was playing ‘El Sinaloense’, which would suggest that everything is being celebrated except a separation. Filed Under: Felix Divorce Two Carnales.

It seems that the party does not stop, while the legal terms are arranged with the divorce agreement, the musical group leaves the place where they were and they get ready on the outskirts of the office, where the celebration continues and the music of Los Dos Carnales is not lacking, to make the moment a unique celebration.

In the clip that lasts 2:13 minutes, the man dressed in a plaid shirt and cap is shown leaving a Civil Registry office, where a band group is already waiting for him, who upon seeing him begins to play ‘El Sinaloense ‘, while those at the scene record the moment with their devices. TO SEE VIDEO CLICK HERE. Filed Under: Woman Celebrates Divorce

The celebration of the divorce process was shared on social networks, showing how happy Felix was, as if it were just another party and not the culmination of a marriage; That was precisely what caught the attention of Internet users, who did not hesitate to share the clip and quickly turn those publications into images of sarcasm.

In the clip that lasts two minutes, Félix Domínguez is shown celebrating with a group to the rhythm of the song ‘Cabrón y Vago’, by Poncho and Imanol Quezada and El Fantasma. In the scene it is heard that the man is told that the celebration is for a divorce, which causes him to laugh and happily reply: “A divorce!” TO SEE VIDEO CLICK HERE. Filed Under: Woman Celebrates Divorce

It became a meme

What Felix never expected was that the celebration of his divorce would become a viral event, much less the media attention he received as a result of the publications he made about it. From one moment to the next, it ended up in pages of ‘memes’, where people were funny about what had happened.

On his Facebook profile, he has shared the images that have been made of him, in addition to that the video he uploaded has been shared on other pages, so the man also decided to show his friends what was happening and they responded with comments positive about the situation. Filed Under: Woman Celebrates Divorce

The interview you gave

The local newspaper El Siglo de Torreón published an interview with Félix Domínguez, the happy divorcee, due to the growing popularity he is having these days and this medium wanted to know the version of events and of course, how he was dealing with his growing fame .

The interview took place on Facebook Messenger, where he mentioned that: “That’s how I am, very happy, they even tell me ‘The happy boy'”, since in the videos that were shared in the previous days, it was visualized how the attitude of the man, since he was never sad about what was happening. Filed Under: Woman Celebrates Divorce