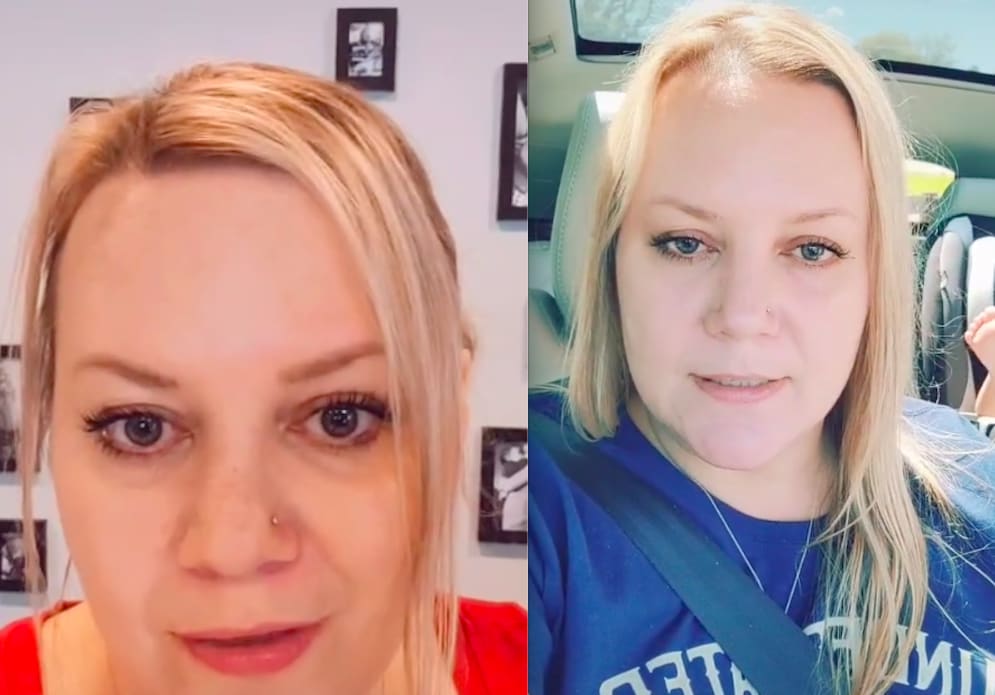 Through TikTok a woman narrated how she discovered her husband’s infidelity with whom she had been married for 10 years and surprised him in the least expected way: through the newspaper and as if that were not enough, she not only discovered that he was ‘cheating’ on her, but that he had another whole family.

Through a TikTok dynamic, a woman launched the challenge of ‘tell me how you found out that your husband was cheating on you’ and soon, another user named Ami Addison told what had happened in the space of a minute: “I have a great story … Days before our tenth anniversary I was in my office looking at the newspaper… ”, he began to narrate.

Woman discovered her husband’s infidelity from the newspaper

The woman who discovered her husband’s infidelity continued: “At that time in the newspaper they published baby births, the names of the parents, the sex of the babies, the day they were born, the hospital, etc … so I saw the name of my husband in one of them… ”, she explained.

“I knew it was him because his name was unusual, so I looked on the hospital website where they also had the pictures of the newborn babies and I realized his and hers name who had had a baby in recent days… “Ami Addison commented without imagining that she would discover anything else.

Woman participates in TikTok dynamic about her husband’s infidelity

To the surprise of Ami Addison, her then husband of 10 years of marriage, not only had he just had a newborn baby, but also a year and a half earlier, he had become the father of a girl, which left her completely stunned. woman who did not hesitate to confront him.

“They had had a girl a year and a half before … So that’s how I found out when he was cheating on me,” said Ami Addison in her video recorded from above the car while appreciating the little leg of a baby who apparently is her son, without However, they made a request.

In another TikTok video, Ami Addison quickly recounted how after learning of her husband’s infidelity, she decided to confront him: “She was obviously super angry, but she wanted to be very sure of the information she had before confronting him,” it is heard say in another video.

“I did not say anything to him that day, not a single word, no matter how difficult it had been, on Thursday he got up to go to work, I told my children that I would come to pick them up from school myself, not to go up to the bus, so I packed all my things, clothes and put them in my car to go to a hotel… ”, he shared.

She also said that she had to calm down and work on her feminine skills to be able to confront her husband: “I found out where the other woman lived and some details about her and I traveled to her house and I see her car in front of the house. woman, then I go back to my house and pack all of his things… ”, he assured.

“I drove to the house of this girl (the lover) and I threw all her things, dress suits, a lot of clothes to her car and it was raining very hard …”, ended her story on that but later overwhelmed by the questions of the people, commented that she lived through a difficult divorce process given the temperament of her ex-husband, whom she always considered ‘capable of cheating on her’ and added that the other woman knew that he was married to her … HERE YOU CAN SEE VIDEO 1 OF THE WOMAN WHO DISCOVERED HER HUSBAND’S INFIDELITY. HERE THE VIDEO 2. HERE THE THIRD PART.

Before the end of the Olympic Games, one more case of infidelity was exposed, because a TikTok girlfriend is cheated on, or her partner ‘was too smart’ (although not so much), for wanting to pretend something that he did not It was, and a photograph that he sent to the girl named Megan-Marie, sunk it.

As reported by the portal ‘El Confidencial’, a few weeks ago, people were euphoric about the Olympic Games, and many situations that involved them went viral, but indirectly one of them caused a commotion thanks to a video on the social network TikTok .

A user of TikTok ‘call her Megan marie’, published a short video of how she discovered the infidelity of her boyfriend who was supposedly watching the Olympics, as commented by the boy, without imagining that his girlfriend’s detective instinct, I discovered it red-handed.

“Me: Hey, what are you doing?” everyone with what she discovered thanks to the photo sent by her boyfriend.

Despite knowing that he was lying by cheating on his girlfriend (cheating on her), the boy prepared to send the ‘evidence’ that he was supposedly with his friends watching the Olympic Games, without imagining that he would put himself in a dangerous situation that it would cost expensive.

The boy boyfriend of the TikTok user sent him a photo where the transmission of sports slang is observed in front of some flowers on a table, a beautiful white dresser and furniture of the same tone, however, he never noticed that the furniture in front of him it had a kind of glass in which his lie was reflected. Filed Under: Woman discovers her husband’s infidelity in the newspaper, tells everything on TikTok

TikTok’s girlfriend named Megan Marie did not stay calm and as a good woman ‘detective’ she used her instincts to realize that something was ‘wrong’ and indeed, she discovered that in the mirror under the TV there were 4 legs, those of her boyfriend and those of a woman drinking wine with him.

As if that were not enough, the modality of moving photos added more drama to the situation, because with that function typical of iPhones, he managed to hear the voice of the woman with whom the boyfriend was cheating on him. Another important aspect to highlight is the appearance of the room in which they were. Filed Under: Woman discovers her husband’s infidelity in the newspaper, tells everything on TikTok

And it is that another aspect to highlight and neglected of the unfaithful, was that he invented being with his friends watching the Olympic Games, being in a merely feminine room, with perfectly cared colors, without any disorder in the photo, or alcoholic beverages or any sign that let it be known that she was indeed with men.

The girl Megan Marie even made close-ups in the photos and in effect, captured up to two women’s books that undoubtedly made her come to the conclusion that she was being vilely deceived by her boyfriend, whom she would have confronted and left after evidencing it on TikTok . Filed Under: Woman discovers her husband’s infidelity in the newspaper, tells everything on TikTok

If it hadn’t been for the photo, you wouldn’t have noticed

Another similar case would have happened days before. Chico sends an innocent photograph to his girlfriend while she was cooking “alone” at home, however, she discovers something unusual in the photograph, a “small detail” that would completely condemn her boyfriend, since he would inadvertently reveal a infidelity on his part.

The eye of women is never wrong and although it is not believed that way, we get to fixate on every detail that may seem a bit strange to us in the things we observe, which keeps us alert to all the possibilities, that was the same as It happened to the girl from the United States, Kayla Paeth, who, being extremely conservative, knew how to find that her boyfriend was cheating on her. HERE YOU CAN SEE THE TRUTH VIDEO Filed under: Woman discovers her husband’s infidelity in the newspaper, tells everything on TikTok