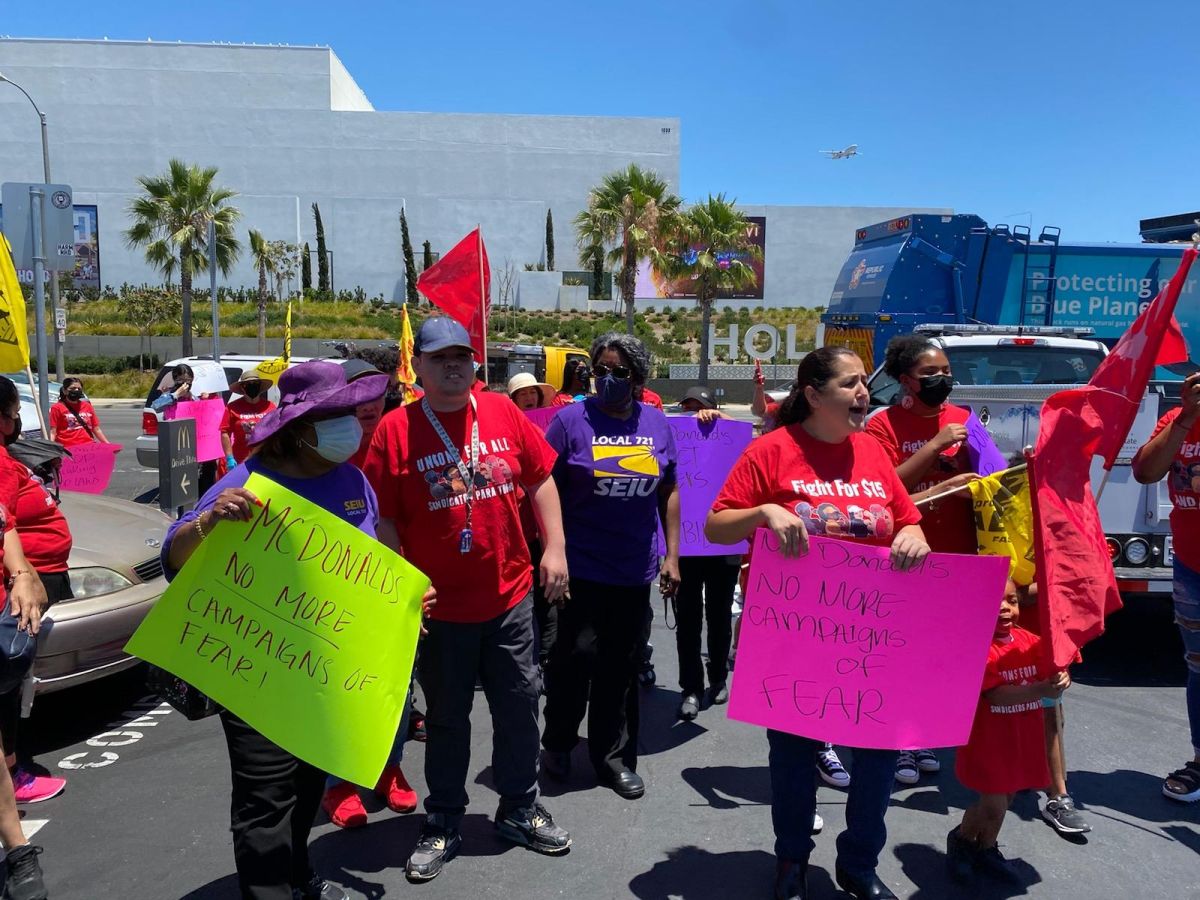 A group of workers at a McDonald’s restaurant in the city of Inglewood went on strike Thursday in protest of the mistreatment and intimidation of a colleague with disabilities who they say is suffering.

German Rivera, 30, is an employee with intellectual and physical disabilities and has worked at the fast food restaurant for more than two years.

He said that at the beginning of the year he began to receive ridicule from his supervisors and some workers after he suffered an incident on the job. While he was carrying a box of ketchup he nearly passed out. A coworker, Estela López, tried to help him and called the supervisor. His managers refused to call an ambulance and called his mother to pick him up and he was accused of faking his fainting.

“After I got off work I went to see the doctor and he told me my blood pressure was low,” said Rivera, who has trouble walking and talking due to his disability.

Rivera said that as a result of this accident his work hours were reduced.

Rivera recently filed a complaint with the California Department of Fair Employment and Housing (DFEH) alleging that McDonald’s subjected him to a hostile work environment and discriminated against him because of his disabilities.

López, who has worked at that McDonald’s for more than 16 years, said that as a result of the incident with Rivera she has also been severely mistreated.

“They have yelled at me, they have mistreated me and they have humiliated me. They want to take me out of my job,” López said.

Both workers filed a complaint with Cal/OSHA last month exposing their managers’ behavior toward both, but primarily Rivera, who has been the victim of “several mean and cruel incidents of harassment and teasing.”

Workers at the protest also called for the passage of AB 257, the FAST Recovery Act, which protects and empowers fast food restaurant workers in California.

AB 257 would grant fast food workers and franchisees the power to improve workplace standards across the industry and give them the ability to hold corporate franchisors accountable for providing safe and fair working conditions.

Rivera said this measure will protect them from harassment and unresolved incidents like the one he suffered.

“This measure is going to give workers a voice at the table,” said the worker.

For her part, López said that for her the measure would be of great help since, for example, now she is emotionally affected since the screams of the supervisors are constant and despite the fact that she has complained directly to the owner, nothing is done. nothing to deal with the situation.

“I have worked at McDonald’s all my life and it breaks my heart that this is happening to me with my co-workers and supervisors,” said the employee of more than 30 years in McDonald’s franchises.

Lopez said that AB 257 will lead to more respect and harmony and less bullying at work.

The bill will advance to a hearing in the Senate Judiciary Committee later this month. The bill would create a statewide Fast Food Industry Council, including representatives from labor, government, and industry, to set minimum health, safety, and employment standards throughout California’s fast food industry.

The council will address issues such as sexual harassment, wage theft, security violations, violence among others. The measure calls for giving workers and franchisees a seat at the table.

Big fast food corporations can be held accountable. Corporate fast-food giants like McDonald’s will need to ensure that all of their restaurants and franchisees have the resources they need to operate safely and in compliance with the law.

La Opinion tried to get a comment from McDonald’s but at press time there was no response.