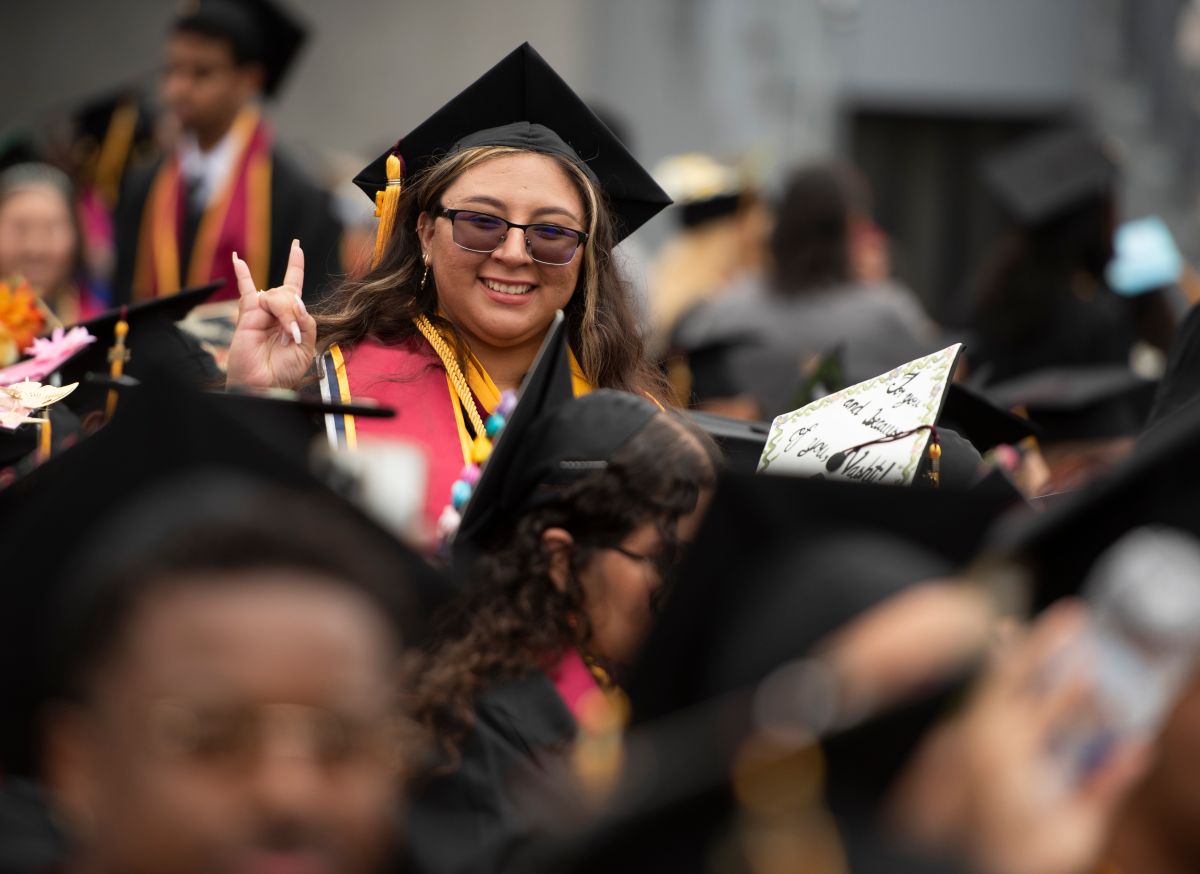 At 21, and against all odds, Areli Zagal Barrera managed to obtain a degree in Human Resources at Cal State Dominguez Hills University (CSUDH), thanks to the support of a mother, who worked up to 60 hours a week to help her, because his father had been deported.

“I have a passion for social justice, for improving my community and helping people,” says the young woman, the daughter of Magdalena Barrera Pantaleón, a Mexican immigrant from the state of Guerrero.

With the help of teachers, CSUDH staff, and her own work, Areli became involved in the university’s educational opportunities program, where she was able to fully develop her leadership skills and help other students navigate the university system.

In that program, this young woman’s focus was to help low-income or first-generation college-educated students; in addition to creating more services and opportunities for them and their own families.

“I have barely taken the first step to reach the highest position in life,” says Areli, who graduated with honors. “Based on my academic interests, my dream is to go into politics, human services, and the education department; I do it so that all the other young people know that great things can be achieved with great efforts.”

The desire to get ahead led Areli to become a mentor to dozens of other students whom she motivated not to give up on their plans to complete a university career, by organizing workshops and events where they could find out about the professional careers they would follow.

“Many felt lost, but I remembered the mentor who helped me and made me feel confident in the career I chose, in addition to the fact that at university I realized that I had a voice to express my ideas and that I could achieve great things ”, he indicates.

“Just as I learned to have a success and work mindset, in the same way my students would feel appreciated and empowered.”

Areli was born in the city of Long Beach and was raised by Magdalena Barrera Pantaleón, a mother who was left alone since her father Margarito was deported.

“He knows I’m going to graduate and he’s proud,” he says.

However, Areli had the full support of her mother, who worked up to 60 hours as a janitor, while she, in turn, became the “second mother” of her younger siblings Magaly and Rubén.

“My graduation means all the effort and support of my mother; feel that all the effort she made was worth it, because I am not only involved in the life of my family, but also in the community”, she reflects.

“I will always recognize that without the support of my mother I could not have gotten to where I am, have many goals and desire to achieve them.”

Indeed, Mrs. Magdalena tells La Opinion that during the Covid-19 pandemic she had to work up to 60 hours to support her children.

“I had to work to bring home something to eat,” says the woman. “There was no other way to make money other than collecting cardboard and recycling all kinds of materials, because the children were at home, with online classes and they had to be fed.”

Magdalena says that the situation was difficult, because for many years she had to go to work as a janitor from 6:00 in the afternoon until 2:30 in the morning, sleep for a few hours and then take her three children to different schools and make sure they were always on time.

“When Areli started driving it was less difficult,” said the mother. “She always followed my advice, and she knows that she has to improve herself. I don’t want her or my other children to work as hard as I do.”

Areli remembers that, in her high school years at Milliken High School in Long Beach, she felt “weird.”

“I didn’t like to consider myself Mexican-American, and it was until I entered college [en Domínguez Hills] when I felt that I recovered part of my life and my identity”, says Areli.

She formed the group “Hermanas Unidas”, made up of some 30 women related to MECh.A. (Chicano Student Movement of Aztlán), a movement that in the United States seeks to promote the unity and empowerment of Chicanos through political action, and whose motto is “Unity is strength.”

But in addition to her mother’s help, Areli Barrera received the Building Skills Partnership Mike Garcia Scholarship given to children of janitors seeking higher education. She also received the Dolores Huerta Award for Social Justice.

“I was able to understand that one should not let his environment define what he is going to be,” he stresses. “As long as you have the ambition to improve, you shouldn’t give up. The most important thing is to know how to ask for help, and doing so is fine, although sometimes in our community there is shame in asking for support.”

According to Lilly McKibbin, a spokesperson for Cal State University Domínguez Hills, 2,797 Latino students will graduate from fall 2021 to spring and summer 2022. The total number of graduates for all majors will be 4,844, of which 58% are Latino students.